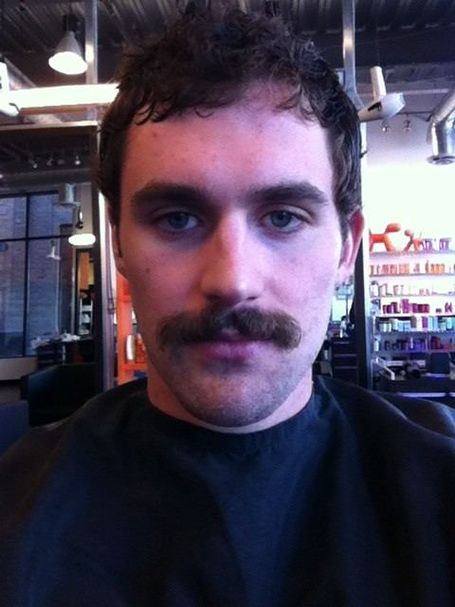 Minnesota Timberwolves (25-38) vs. Detroit Pistons 23-39) at the Palace of Auburn Hills

The Detroit Pistons won by 39 on Tuesday night over the Cleveland Cavaliers. At one point, they were up 100-50.

The Pistons lost by 32 on Wednesday night against the Atlanta Hawks. At one point, they were down 72-42.

Which version of the Pistons will be playing the Timberwolves tonight?

Also, Kevin Love isn't playing tonight, but he's already been player of the game with that mustache.

If you're looking for a starting NBA wing player who is worse than Wesley Johnson, look no further...

It seems like a long time since the Wolves had something to celebrate. They've lost 27 in a row in April and 11 straight this season.

It is still not for certain whether Kevin Love will play again before the end of this season.

Kevin Love - Out indefinitely with concussion symptoms and a strained neck

Darko Milicic - Out indefinitely with a strained right hamstring

Ricky Rubio - Out for remainder of the season

It feels a little strange to actively root for the Utah Jazz.

As a result, the Jazz moved into the 8th playoff spot. With three games left to play - all at home against Orlando, Phoenix and Portland - they are 2 games behind Dallas (6th), 1 1/2 behind Denver (7th) and 1/2 game ahead of both Phoenix and Houston.

Tonight, Houston is at New Orleans and Phoenix is at home against the Clippers. Utah does not play again until Saturday.

Lawrence Frank has had a positive impact in Detroit. Of course, John Kuester set the bar incredibly low.