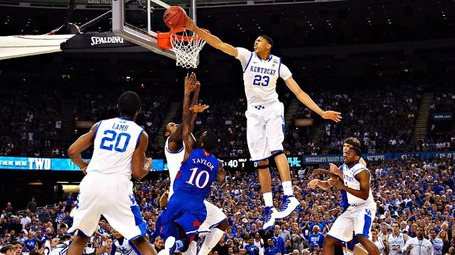 That image pretty much says everything you need to know about Anthony Davis. He jumps high, reaches far, and rejects the other team like his life depends on it.

How good was he in tonight's NCAA Championship game? Well, he shot 1-10 tonight...and was still the best player on the floor by a wide margin. 16 rebounds, 5 assists, 6 blocks.

Those 6 blocks, by the way, give him the record for blocked shots by a freshman in NCAA history (183). That's also just 24 shy of the all-time everyone record set by The Admiral (for Davis, 24 blocks is just 5 games of work or so)

And oh yeah, there was a Timberwolves game tonight. Brad Miller started and apparently thought his jersey said "Love" on the back. Pekovic returned and managed to rack up 3 fouls in 2 minutes before finding his footing again. DeMarcus Cousins is barely shooting above 44% for the season but went 7-12 against us, because of course, life hates us (or because he's got a chip on his shoulder and we're apparently afraid that playing defense might be...I dunno....effective or something)

I guess you can talk about that to, if you really want...