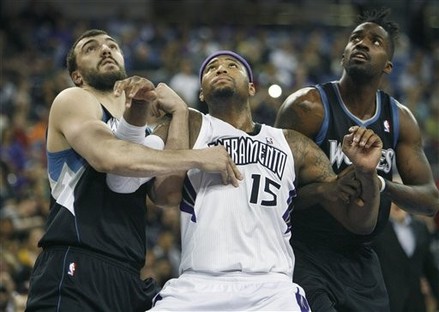 (Editor's note: bsg007 originally posted this as a comment, but I felt it should be its own post. It really is a fantastic account of last night's game against Sacramento. You should read it.)


Last night I got a chance to watch the game with Mike (Boss 10 on the site) from the seats behind press row. Mike got the tickets through a friend of his, and I am truly grateful he was able to do so.

It was an incredibly unique experience in that we spent about 30 minutes talking to JPete and Hanny.

When we first walked into the arena about an hour early JPete was preparing for the game. Mike immediately started talking to him, and it was clear that JPete recognized him. Mike has a very memorable look in that he is Samoan/Caucasian mix, 6’3", and has several cool tattoos, long hair, a piercing just below his lower lip and a lot of facial hair. I told JPete that I spoke to him at the Golden State game and he remembered seeing my wife and I. I asked him if he visits the canishoopus website, and he said he frequently reads it. He mentioned Tim Allen and Nate Arch by name and he referred to them as great guys with a wealth of basketball knowledge. He said it would be foolish of him to not read CH as he can garner additional insight about the Wolves by doing so. I don’t know if he actually posts on here and I didn’t ask him if he does, but I would be surprised if he did. Interestingly, he remembered the photographs I posted from the game at Golden State and specifically mentioned my post which was kind of cool. I made sure he knew we all loved him on CH, but I think it was already pretty evident to him. I asked him if he will be coaching the Lynx again this season to which he responded affirmatively. He was even so cool as to place his computer in a position so that we could watch the Kentucky-Kansas game along side him. He picked Kentucky to win and felt the game wouldn’t be close. After the game he made it clear that he agrees wholeheartedly that the Wolves need a 2 and a 3.

Our conversation with Tom Hanneman was great as well. Initially, I felt bad because Tom mentioned that the affection he receives from CH is much less than what JPete does, suggesting he reads the site as well. For what it is worth, having now spoken to Tom twice, he is a very decent and great guy. I’m really glad he broadcasts for the Wolves and I hope he does so for as long as he wants to. My conversation with him provided me with a glimpse of how tenuous broadcasting jobs really are. It didn’t even occur to me, although it should have, that Tom’s work is dependent on how good the team is, and how solvent the NBA is. The lockout threatened a lot of jobs and forced people like Tom to have to consider their options. Moreover, when the Wolves are bad, less games are broadcast, meaning less work for Wolves broadcasters. Regardless, Tom emphasized that he feels truly fortunate to have the job he does, and he was incredibly humble. He has a genuine fondness for Ricky as he again (he did so at Oracle as well) referenced his great desire to see Ricky back on the court.

Jerry Zgoda sat in the chair in front of me. He writes some of his column while the game is in progress, and I was able to read it unbeknownst to him. We didn’t talk much because he was fairly focused on the game. His butt crack was showing almost the entire game, but I didn’t have the heart to tell him that.

Mike (Boss10) is an amazing Wolves fan, and it is great going to games with him. First, he is the loudest fan I’ve ever seen in my life. He has a booming voice that caught the attention of the players on several occasions. Simply put, he is the Lebron James of fans. Every time Pek did something good Mike would scream, "Pek!", and half of press row would turn around to glare at him. Amazingly, Pek seemed to remember seeing Mike during the previous Sacramento-Wolves game as he winked at him during one of the timeouts. Unfortunately, despite all of Mike’s cheering, we lost the game. I wish I could have been more vocal during the game (Mike even said he thought I would louder), but my working the night before/morning of and the drive to Sacramento took a lot out of me.

Rick Adelman behaved very similarly to what he did during the Golden State game. He unpredictably paced the sidelines and he argued with the refs from the start. He was infuriated with the play of several players, but mostly with DWill. He did get mad at Malcolm, but it was clear he was cutting him a lot of slack because he is a rookie, and he was much more gentle with him.

Brad Miller’s first quarter was quite striking. His 3 three pointers came out of nowhere, and we were utterly shocked, as was the entire Wolves bench. Terry Porter was outright laughing when Brad made his third 3 pointer. Regardless, we knew it wouldn’t last, and we were right.

Sacramento fans remain very fond of Rick Adelman and Brad Miller who received a lot of applause during pregame introductions. In addition, the Kings congratulated Brad during a timeout in the third quarter and wished him well in the future. They broadcast some of his highlights on the big screen at that time, and Brad was visibly blushing, particularly when AT and Kevin started ribbing him.

Cousins complains about everything. In addition, his immaturity is readily evident, but it’s not the type of immaturity I would consider detrimental to the team. He was just acting "very young" by pouting when he had to come out of the game due to foul trouble, and when he complained to the refs, but it wasn’t troublesome in my opinion. In fact, he was very supportive of his teammates and was mentally invested in the game.

Tyreke looked unstoppable when Martel was covering him. The lack of perimeter defense by the Wolves was really bothering us.

The Kings fans were great to us. Nobody gave us any crap for wearing our Wolves gear. On several occasions, Kings fans stopped me when they saw I was wearing a Rubio jersey, and told me how much they wanted to see him and how disturbed they were to see him get injured.

There were Wolves fans at the game scattered throughout, but there were not very many. In fact, there weren’t a lot of people at the game.

The halftime show was shockingly bad. They had a group of about a 100 guys and girls, ranging from ages 18-50 I would guess, doing a "Zumba dance" that was horrendously asynchronous and sad to watch. I’m guessing the Kings are paying for their new arena by skimping on halftime entertainment.

Mike (Boss10) is an awesome guy. He is a huge Wolves fan as evidenced by his in game cheering, and his Wolves memorabilia. He has at least 15 Wolves jerseys, and he has actual game warm ups worn by Michael Beasley, Trent Tucker, Martel Webster (he wore these to the game), etc., which he got on ebay. He has a big heart and was very generous, and I’m glad I had the chance to hang out with him. He actually made us wait for about 30 minutes after the game because he wanted to get Pek’s autograph to send to Cynical Jason. Sadly, we were unable to get Pek’s autograph.

Overall, I had a great time at the game thanks to Mike. We both feel very fortunate to have found the CH site because we feel CHers are intelligent, kind, passionate about the game, etc. Mike is now the second person I’ve met through CH (I met Jack-dropstep previously), and he, along with Jack, only reaffirmed my perception of how great CHers are.