Since I've pretty much given up on the season, I've been looking into the draft. This post provides a lot of raw data and a score that I've created to help evaluate players. I'll wrap it up with the names of some players I think have a good chance to succeed in the NBA.

In order to narrow the field a bit, I focused on the players in Draft Express' 2012 and 2013 mock drafts. Note that I didn't do anything for high school or international players. I looked at a couple of things. First, I show win shares per 48 minutes (WS48). This is a handy stat for NBA players because Basketball Reference includes it. I doubt that college WS48 values can be compared to NBA WS48 values, but I think it is useful to compare values across college players.

This measures how much better or worse the player performed in that area, measured in standard deviations. Then I simply add up this value (unweighted) across the six areas to get the MDSD Score. An average player will score 0.00. (That's the average of everyone, not just the average of the draft prospects.) Really good scores start at +4 or +5. Harrison Barnes scores a -0.66.

A few of notes about the MDSD score. It can be very sensitive to position assignment. For example, it loves Branden Dawson of Michigan State because he's classified as a guard but he rebounds like a forward. (He's still a pretty good prospect when classified as a forward.) Second, players sometimes score well because of performance in just one or two areas. For example, Jeff Withey of Kansas scores 6.15, but 4.54 of that comes from his BLK% score alone. Third, players tend to score better as they get older and more experienced. I estimate that from freshman to senior year, a typical player will see his MDSD rise by about 1 point for guards and 1.5 points for forwards. However, I haven't incorporated any sort of age adjustment into the scores shown below. Finally, I don't know the extent to which the MDSD score penalizes players for being on good teams (e.g., does Harrison Barnes score low on rebounding because UNC had three other good rebounders?) or rewards do-it-all players from lesser programs. I will note that, without reverse engineering of any kind, the MDSD score loved Kenneth Faried, Jeremy Lin, and (to a lesser extent) Landry Fields.

The tables below show the WS48 and MDSD scores by season for the players that DX has in its 2012 and 2013 mock drafts. I included the 2013 mock draft because some of those players may declare for the 2012 draft and even if they don't, it might be interesting to see how they scored. As you can see, Anthony Davis is awesome. I think both the WS48 and MDSD scores help sort out the guys being drafted on "potential" versus performance. Barnes, for example, is all hype. Perry Jones looks like trouble. Dion Waiters, however, might be a good pick despite his Syracuse heritage. 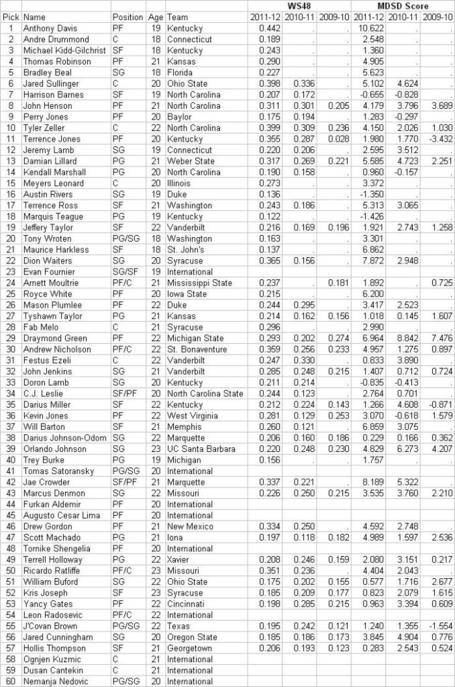 Here's the 2013 draft. Tony Mitchell (North Texas) and C.J. McCollum are two of the more prominent players (in terms of their scores) that may enter the 2012 draft. 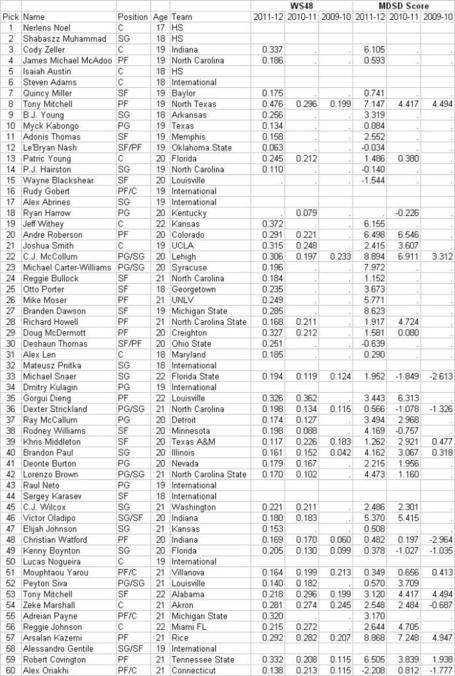 Here is a link to the spreadsheets corresponding to these charts.

I'll wrap up with a list of a few non-obvious players who I really like based on these results: Tony Mitchell, C.J. McCollum, Jae Crowder, and Will Barton. There is also a player who scored really well a couple of years ago and is now doing well in the NBDL: Marqus Blakely. He's auditioned with the Clippers and Rockets but has not been able to stick in the NBA. I'd invite him to camp and see if he can bring some energy and productivity to the end of the bench at a discount price.

These scores aren't intended to be an all-inclusive player evaluation, but I think they do a good job of identifying players who have been productive. I haven't done a systematic comparison of these scores with pro performance, but my casual examination indicates that it may do OK. (That is, conditional on having been identified as a prospect in the first place. There are some small school guys who score very well but probably don't have the physical profile to succeed in the NBA.)

I'd be interested to get your opinions on the scores as well.

REVISION: I've added in tables at the bottom showing how players in the previous two drafts scored. That might help you judge how well the scores work. 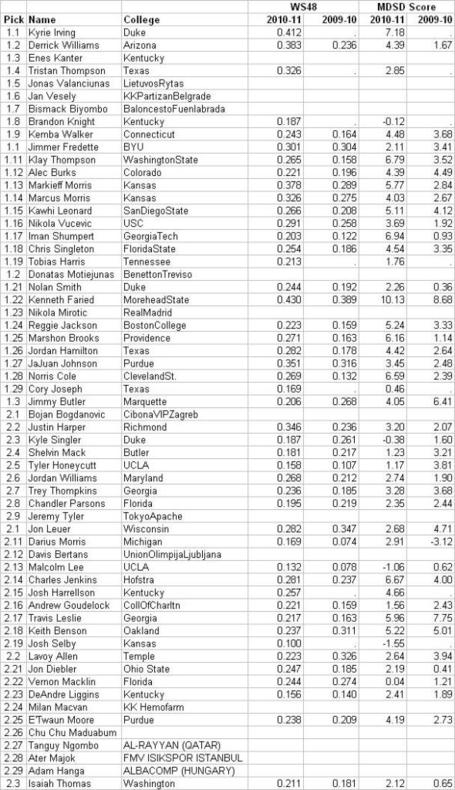