Share All sharing options for: 2012 free agents, cap space, and... (an odyssey into the Timberwolves 2012 off season)

With Our Beloved Puppies in the midst of yet another 0-April effort, and with whispers of Papa Glen wanting to do little more than sprinkle some magic Team Adelman dust on Wes Johnson, and with David Kahn continuing to insist that the singular move is jussssssst round the next corner, and with the team currently holding a single draft pick in the 2nd round (the 59th), let's take a combined look at what is actually available to the squad in terms of cap space and potential free agents.

Much more below the fold.

Let's start with figuring out just how much money they have to work with in free agency.

Piecing together information from Sham Sports, HoopsHype, news articles and the rookie salary scales of the past few years, we can see that if all team and player options were picked up for the 2012/13 season, the Wolves would be on the hook for just over $70 million spread over 14 players.

With rosters set at 15 and the cap expected to be in the neighborhood of $58-60 million, this doesn't exactly leave a lot of wiggle room. Clearly the Wolves will have to decline some of these options.

Not picking up the qualifying offers for Michael Beasley and Anthony Randolph brings down the total to $58.1 mil and 12 players. This gives the team essentially zero room to work with under the cap. They still need to clear some space.

Brad Miller has said he will retire after the season. Taking away his team option brings the totals down to $53 million and 11 players. This is probably the baseline of what fans should expect from the squad over the summer. It would be enough for them to sign a modest 4 for $4 Kahn special while leaving enough room for...well, this is where things will get weird.

As we have seen with the recent outbreak of injuries, filling a roster is both a financial and physical matter. Yes, cap space is, in theory, great. However, you also need enough bodies at each position to field a functional team, let alone a competitive one.

Let's say that the Wolves decline Martell Webster's team option. This gets them to $47.3 mil over 10 contracts. This should give them roughly $10-12 mil of usable cap space on the open market. Sounds great, right? Well, they're certainly not going to spend it in one spot and trot out a roster of 11 players + D-League filler, right?

Declining Webster's option leaves them with Wes Johnson as the only able-bodied 3. JJ Barea, Luke Ridnour, Wayne Ellington, and Malcolm Lee would be the quasi 2s. That's 1/2 of the 10 contract roster wrapped up in kind-of-sort-of wingish bad production. Something else clearly needs to be done. (Seriously, let the fact that 1/2 of the potential 10 contract roster is composed of players who are neither true starting points or true starting 2 guards sink in for a moment.)

Let's talk about amnestying Darko. What would this do for the team? First, it would get them down to $42.1 mil and 9 contracts. It would also leave them with Kevin Love and Nikola Pekovic as the only players on the roster who could play center. Chalk up another need for the team.

At this point the comical mismanagement of this roster and franchise should be obvious. With alllllll the draft picks, and with alllll the supposed cap space, and with allll the mana from heaven, the Wolves are, 3 years into the Kahn era, still looking at a massively unbalanced roster with 2 McHale guys, a load of Kahn quasi 2 guards (Ridnour, Ellington, Lee, Barea), and the Golden Goose, who is currently injured. That's what they have to be stripped down to if the talk of cap space is to mean anything. Why?

Let's say the team goes the Darko route. With that status quo in place they will have $42 mil over 8 players in 13/14. Who is the missing player from the previous 9? Nikola Pekovic. If the Wolves are lucky, they can pencil in a fat $10 mil into that spot, bringing them to $52 mil and 9 players. That's $52 mil with up to 6 roster spots to fill. This would typically be the time of the rebuild where the owner would be asked to pay a little extra to keep a promising young team together after they show signs of winning.

(There is one thing I'm kind of uncertain about with the timing. Can the team sign or trade for players before Kevin Love's contract kicks in at the start of the new NBA year (end of June)? If so, that would free up an additional $7 mil (his qualifying offer was $6.1 mil) for a short period of time. I don't think this is the case, but I'd really like to be certain about it. If this is the case, then the team has actual money they can play with to sign some solid talent and fill out the roster before sending Papa Glen over the cap....which I don't think will happen, but...)
The next thing we need to look at is the competition. Cap space doesn't exist in a vacuum. Last month Larry Coon put together a list of teams with 2012-13 off-season cap space (insider required):

My best bet is that Charlotte isn't going to spend a dime of its cap space, as they are going the OKC route with Rich Cho (i.e. suck while playing their young players--which, fwiw, is kind of the anti-Adelman approach, but that's a post for another day), leaving the Wolves with the potential to make it into 10th to 6th place on the cap list should they go with option #4. I have no good idea of what the other teams will choose to do. I can't imagine Dallas standing pat. I can't imagine NOLA doing much without an owner. Who knows what Boston will do after the Big Three era is over? Anywho...
Who will these teams be competing for? 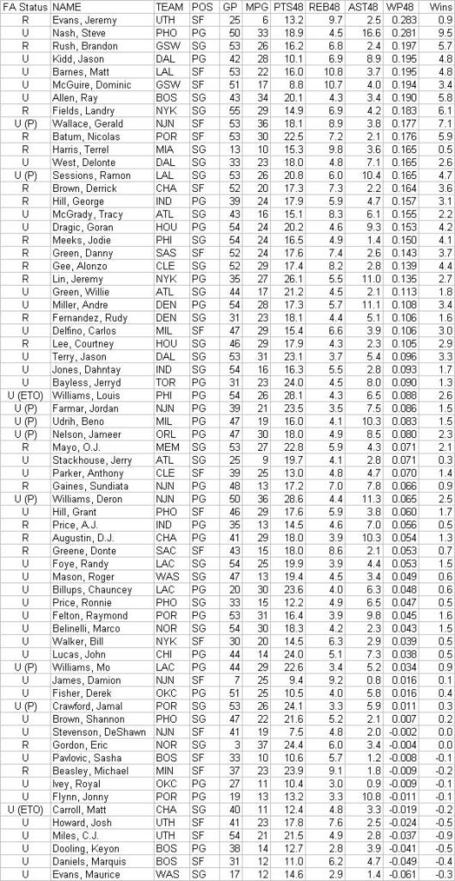 I'll save the "what should they do" for a future post, but is it too early to start up the Sign Landry Fields bandwagon?
Without a 1st round draft pick, and with clearing the decks for cap space, and with the clownish proportions of the current roster, the Wolves need to ink, at the very least, a 4/5 and a wing player.
Sooooooooo...as the best I can tell, this appears to be their list of options. Did we miss anyone? Is anything wrong with the money math or contract timing? I thought about putting together a list of teams that might be good trade targets but that would take this post down the what-if rabbit hole when I really want to keep it confined to an accounting of legitimate available options.
What say you?