I used my PA100 datasets from 2009/10, 2010/11, and 2011/12 to study how player performance changes with age. This certainly isn't the first study to investigate aging and performance in the NBA, but because the PA metric looks at offense and defense separately, I think it does paint a unique picture of the NBA aging process. 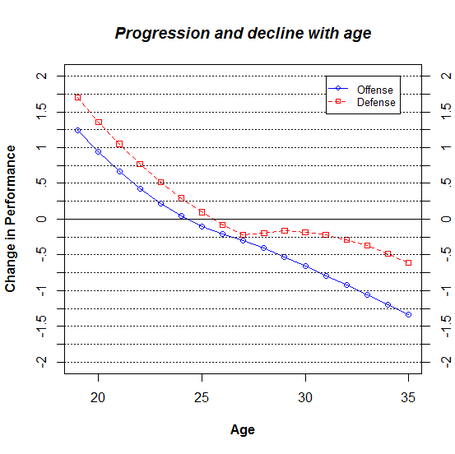 Players tend to peak offensively shortly after their 24th birthday. They then begin an increasingly rapid decline in offensive ability throughout the rest of their careers. Defensively, players tend not to peak until closer to their 26th birthday. They then slowly lose their defensive ability until about 32 or 33 when the finally see the same accelerated decline in defense that they experienced in their offense 5-7 years earlier.

In reality, I doubt player progression and especially decline works as smoothly as the average rates imply here. Instead, I imagine players' careers are more accurately characterized by a steady but noisy improvement early, then relatively constant performance until a sudden collapse happening somewhere at or above the age of 30. That said, these numbers should still help us set our expectations for players.

Hopefully this study alone is pretty interesting to folks.... but I know application is always a little more fun. That is why I tried applying these numbers to some of our favorite Timberwolves in order to develop expected career projections.

First let's start with a projection that has already been supported by reality. I present, Kevin Love's projected career based on his sophomore performance in 2009/10: 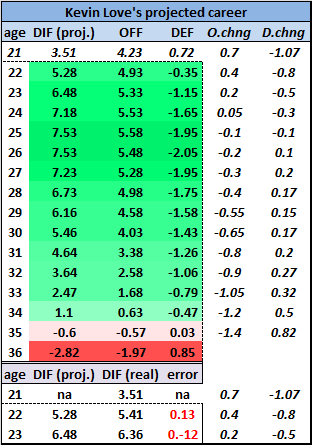 I defy anybody to tell me a year ago that they saw this kind of season coming with Kevin. Nobody saw it coming. Who could have seen it coming?

Me. (and a slew of other statistically minded basketball fans)

The PA100 player progression missed Love's 2010/11 MIP performance by only 0.13 points, or about 2.5% of a standard deviation. It then overshot his 2011/12 performance by almost exactly the same margin (-0.12). I'm not going to pretend I can consistently get this kind of precision... I can't, but I think Kahn is still fair game here.

The other interesting players to prognosticate are our little up-and-comers, the 2011/12 Timberwolves rookie class of Rubio, Williams, and Lee.

I may have recently argued that Rubio was not as awesome this past season as many thought, but that should not dampen excitement for the future. To put Rubio's +5.38 differential peak into perspective, Tony Parker posted a +5.05 and Russell Westbrook posted a +5.67 this past season. I'm not sure these number project as a max contract player, but they certainly indicate Rubio has the potential to become an all-star and huge part of a championship contender. I can't overstate how noisy these projections are, but the numbers are certainly promising.... I should also note that the noise goes both ways, so feel free to speculate even more wildly optimistic futures for Ricky if that is what keeps you going.

Thanks to his young age, Derrick still projects to become a decent player. His peak of +2.02 is a little below where Tiago Splitter (+2.2) scored this season, and a little above Godron Hayward (+1.77). Unfortunately, that won't be until right around the same time his contract expires. This is the cruel reality of "developing" players. Far too often teams sacrifice countless minutes to terrible production, only to end up losing the player or overpaying as soon as they actually become contributors.

Malcolm certainly projects to be a great defender... unfortunately basketball is a 2-way sport.

Keep these numbers in mind when evaluating potential off-season moves. What should we really expect out of Pau Gasol at age 32 and 33 or Iggy at 29 and 30? The real story is much more complicated than these numbers imply, but understanding the pattern of progress in decline is vital to making good NBA decisions.