The Road to Repeat: A Recap of Minnesota Lynx Media Day

Share All sharing options for: The Road to Repeat: A Recap of Minnesota Lynx Media Day 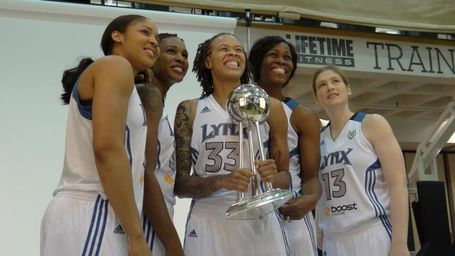 As Wolves fans, we spend so much time talking about who to develop, who to sign, who to trade for and what has to change in order for the team to keep climbing towards the playoffs.

At Minnesota Lynx Media Day on Monday afternoon, there were a lot of people talking about the 2012 WNBA season. it was the biggest turnout for a media day in team history and the Lynx have turned from a side attraction to a respected mainstay in the Minnesota sports landscape. Now, instead of trying to figure out how to climb the mountain, they're working on how to stay there. Given their young talent, they could be at the top for the next several seasons.

Instead of taking out the tape recorder and staying in the media scrum, I spent the day walking around and talking to people - media, front office and players - about the upcoming season. It was a fun day and there's much more below the fold.

Happy to Be There

There is not much space on the Minnesota Lynx' roster and some of the players invited to training camp, including draft picks from this year, will not be with the team when the season begins. Queralt Casas, from Spain, and Julie Wojta, from Wisconsin-Green Bay, are two players who are longshots to make the opening day roster, and yet, they both seemed grateful to have the training camp experience with a championship team and coaching staff.

Casas, who does not speak a great deal of English, has developed a bond with returning free agent Candice Wiggins. Wiggins has played professionally in Spain and knows the language well. As Wiggins pointed out to me, it's hard enough for incoming rookies to understand the plays in English, let alone having to understand plays in a different language or through a translator. Wiggins has been a valuable friend and teammate for Casas, the MVP of the 2011 U-20 European Championship.

Wojta, who was the first draft pick from the Wisconsin-Green Bay Phoenix, was handling media day with ease. She seemed more nervous about her upcoming accounting final than she did about talking with reporters (she is still in the process of finishing up her degree. She plans to become a CPA once her basketball career is over.) Wojta told me that she has signed a contract with a professional team in Belgium that will start playing in September.

For both these players, and others like Tavelyn James, the challenge of trying to make the roster and the experience of working with such talented individuals are invaluable. The atmosphere of winning is something that tends to rub off and stay with you no matter where you go. 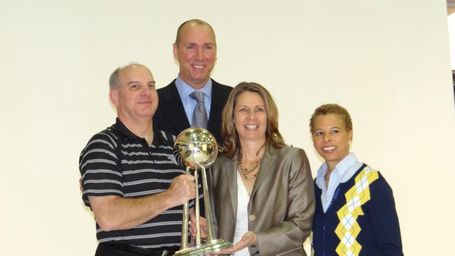 Many of the same people are involved with both the Minnesota Timberwolves and the Minnesota Lynx, and the comparisons between the two franchises are inevitable and unavoidable.

Tom Hanneman, the play-by-play announcer for the Wolves, is not involved with the Lynx in any official capacity. He came down to Lynx media day because of the buzz surrounding the team and seemed a little sad that he doesn't get to call their games on television.

Jim Petersen, the color commentator for the Wolves, in an assistant coach for the Lynx and has been an integral part of their success. In between taking photos and doing official interviews, he stuck around and chatted about the team's championship defense.

One thing that Hanny told me is that, during the Wolves season this year, he could tell that the Lynx have spoiled Petersen to a certain extent. Since he was around such tremendous talent, basketball IQ and execution last season, he's started to expect it from the Wolves. When they were unable to deliver on the same level as the Lynx, Petersen was more disappointed and more critical than he had been in the past.

That was a common theme at Media Day. Expectations have shifted. While mediocrity was once acceptable, that is no longer the case for the Lynx, and for many, those feelings have carried over to the Timberwolves. Wolves Radio's Alan Horton said that when he watches the wing play of Seimone Augustus and Maya Moore, it makes the play of Wesley Johnson that much more frustrating.

And while it is certainly different building a team in the WNBA than it is in the NBA, there were many - including several Wolves' employees - who agreed that it would be nice to have the same level of competency in the Wolves' front office as there is with the Lynx.

When I was discussing the Lynx' roster with Petersen, he used and quoted advanced stats with ease. He talked about rebounding rate as one of the factors in the selection of Devereaux Peters over Glory Johnson and embraces per-minute and per-possession stats as a means of analysis. While improving in that area, especially with Rick Adelman's team coming aboard, it would be nice to know that the Wolves were as comfortable using analytics as the Lynx.

Hanneman noted that, when he was walking to the practice facility, he stopped and looked at a picture of a Lynx' WNBA Finals game from this year against the Atlanta Dream. The stands were packed. It was an apt reminder that the Twin Cities are a wonderful community for basketball when teams put out a quality product. Now, of course, the Lynx' fan base will not be satisfied with anything less than another title run and the Wolves' fan base has started to believe that winning basketball is something that should be expected, and not just thought of as a pipe dream. 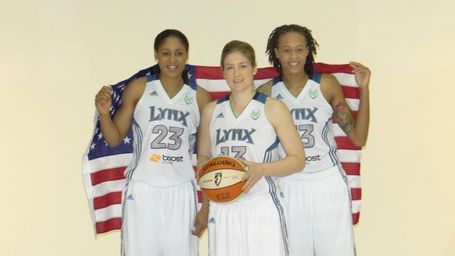 While fans and media members have one set of expectations, coach Cheryl Reeve is trying to make sure that her team does not have any kind of let down. After all, given the talent of the Lynx, they should not be satisfied with only one title. They should have goals that are well beyond that.

Reeve told her team that they should celebrate the title, but once those celebrations ended, they should quickly forget that they've won anything and get back to work. As an assistant under Bill Laimbeer with the Detroit Shock, Reeve won two WNBA titles, and made the Finals in three straight years. She is accustomed to winning and has high expectations for the Lynx' title defense this season.

They certainly have the tools to do it.

Rookie Devereaux Peters has impressive the coaching staff and the veterans on the Lynx as a player who can contribute on the floor. Jim Petersen told me that he doesn't expect Peters to play that many minutes this season, but in terms of the future, she will play a valuable role. Taj McWilliams-Franklin talked about how impressed she was with Peters and how, after she has retired, she expects Peters to be helping the Lynx maintain their success.

Candice Wiggins, who could've left the team and become a restricted free agent, decided to stay in Minnesota. Wiggins has always been one of the most vocal and most vibrant members of the team, even as a rookie, but she is beginning to use her voice to become a leader on a team that is already filled with leaders. When young players have needed guidance in camp, she's been there to provided it. She puts players in the right spots and is also able to lead by example as one of the best bench players in the league.

Lindsay Whalen and Seimone Augustus are two Olympians who spent the winter playing overseas and returned on Friday to Lynx' camp. Both players, who are two of the best in the entire WNBA, spoke of how unselfish this team is and how much everybody wants to help each other succeed. While lots of athletes talk about unselfish play, you really get the sense that it is true with the Lynx. Both Whalen and Augustus spent years with losing teams and have been very grateful about being on a squad that is filled with this much talent and versatility.

Maya Moore, who is one of the most recognizable players in the WNBA, is coming off of two championships this year: her WNBA title and her Euroleague title with Ros Casares Valencia. Moore talked to me about being reminded of her time at UConn. She's used to being a champion and having a target on her back. She's not used to losing. As a rising young star, it is so important for Moore to buy-in to the team approach of the Lynx. Moore has impressive maturity and does not appear to be taking any of this for granted.

The biggest weaknesses of last year's team - their bench and their interior defense when McWilliams-Franklin was out of the game - have been addressed. This is going to be a very fun team to watch.

Minnesota plays its first, and only, home preseason game on Tuesday, May 15, against the Chicago Sky at the University of Minnesota Sports Pavilion. Their first regular season game is Sunday, May 20, at Target Center against the Phoenix Mercury. The game will be broadcast on ABC.