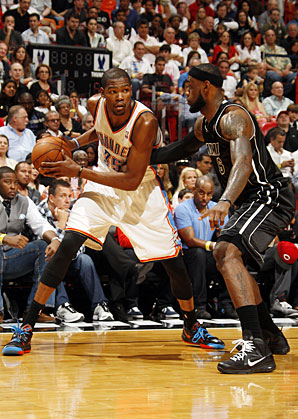 In 2007-2008, the Seattle Supersonics and the Miami Heat were the two worst teams in the league, sitting at records of 20-62 and 15-67 respectively. The Sonics were built around two rookies, Kevin Durant and Jeff Green (no Westbrook yet) with a supporting cast of castoffs....Earl Watson, Chris Wilcox, Wally Sizzlerbean, etc. The Miami Heat meanwhile were shot down by injuries. Wade was limited to 51 games, Shaq to 33, and Shawn Marion to just 15.

This year, they're both in the Finals.

But let's set that aside for the next couple of weeks, because now we have the kind of Finals matchup everyone wants. Yesterday's NBA is officially in the past. The Thunder trampled the Lakers and Spurs to get here. The Heat finally bested the Celtics when it mattered. It's the future now...the best young teams with the best young stars going head to head. LeBron v Durant. You have to be excited for that.

When LeBron James was drafted, he was hailed as the next (next) Michael Jordan (because obviously Kobe was the first next MJ), but ironically was most often compared to Magic Johnson. First, he plays more like Magic....he really is essentially a gigantic point guard. He started at point guard his rookie year. He constantly talked about how he was a pass-first player. He ran a shoe commercial with Bernie Mac about how he asked God for court vision.

And second, of course, he was drafted alongside a guy who was going to be the next Larry Bird: Carmelo Anthony. The narrative fit.

Of course, that's not the way it's actually worked out. Except for the rings, LeBron has more than lived up to the hype. He has shattered records....Kobe's and MJ's included....and will likely finish his career with more total points, rebounds, and assists than either of them. LeBron James has dominated this league.

Melo, not so much.

But there is a tall, lanky, multi-dimensional, shoot-the-lights-out guy in the league who IS rather Birdlike. Kevin Durant. And while KD's style is more that of the Iceman, his game is very much that of the Legend. And now he and the next Magic go head-to-head.....literally, as they play the same position....with nothing short of the Championship on the line.

That said, I don't think either of them will tip the series.

The only way I see Durant or LeBron being the true key factor in all this is if one has a meltdown and performs way below board. Durant has nerves of steel; I don't see that happening to him. And LeBron already had his meltdown last year; I don't see him letting that happen again.

The experts seem to think that the Heat will send Battier after Durant, and the Thunder will throw Sefalosha at LeBron, to try and keep their stars from collapsing trying to kill each other. I personally disagree with that. For one, there's probably going to be a lost of small ball in this series, and you certainly wouldn't want a guy like Thabo at power forward. Two, the Thunder might be inclined to play chicken (of sorts) with LeBron....see if the pressure to outperform Durant makes him fold like it did last year. And three, neither James or Durant are the kind of players to back down from that sort of challenge. They'll want to match up, to see who's really better.

That means this series will probably turn on the supporting cast.

Here's where the Heat have the advantage:

Assuming Chris Bosh is healthy, he's Big Miami Advantage. At full strength, Bosh can outscore OKC's entire post rotation combined. He also balances Miami's pick-and-roll game. We saw against the Celtics that Bosh's presence on the floor kept Garnett from playing free safety on LeBron and particularly on Wade. Individually, no Thunder big man has a prayer of consistently doing what Chris Bosh can do.

The Heat are also the much stronger defensive team of the two: 4th in the league in points allowed, compared to the Thunder's 17th. LeBron James sets an unparalleled defensive tone, and the Heat are stocked with guys who are athletic (Wade) or savvy (Battier) on the defensive end.

Here's where the Thunder have the advantage:

Russell Westbrook is unstoppable. Like, Dwyane Wade unstoppable. You think Mario Chalmers stops DWade in practice? I don't think Mario Chalmers stops DWade in practice. The Heat has a serious riddle to figure out in Westbrook. He makes a living tearing apart defenses in the lane, and unlike the Spurs and Lakers (who couldn't stop him anyway), the Heat don't have the type of big men to defend the interior. Miami's stellar defense considered, they also got shredded by one Rajon Rondo last series....at that's a guy who can't shoot.

The Thunder are also a much much better rebounding team: 6th in the league (tied with us, BTW), wheras the Heat are 21st. OKC's rebound-by-committee strategy works; no one of their roster averages more than 8rpg, but as a team they own the glass. The Thunder can make up for their gap in defense by limiting Miami's second shot opportunities.

My Prediction: Thunder in 7

And it hurts to say that, because we were supposed be get there first. OKC in the Finals is just a living embodiment of 5 years of Puppy failures.

But here's the thing: unlike last year, this year the Heat don't have a clear statistical advantage. James, Wade and Bosh don't have Durant, Westbrook and Harden outmatched. The Thunder drew possibly the league's most difficult playoff path this year....the team that beat them last year, the team that represented dominance for the least decade, and the flat out best team in the league...and they ran through all three like it was nothing. Durant is unbreakable. LeBron, well, he still has to prove it. The Thunder are better managed, both on and off the floor, have youth and energy on their side, and have a fanbase that makes the Cameron Crazies look like the Target Center (ooohh, burn). Mark Cuban said last year that once the playoffs hit, it's all about momentum. All else equal, I'll take the team that's already on a roll.

Post your predictions below. Tipoff is tonight at 8pm. Let the games begin.