ver the last few days I finally got around to investigating the NCAA to NBA transition. With the draft coming everyone's favorite question is, "what kind of college players become quality NBA players." I still can't answer that question with any confidence, but I do have some interesting findings that may help get the ball rolling.

My analysis used all college players in the draft express database beginning in 2002/03, and the season in which all players turned 25 years old in the past eight years. I used this data to identify how pre-draft information (production and combine measurements) can help us understand where a player will be when he reaches his peak years of production.

I started with all of these variables and simply plugged them into a stepwise AIC program to try and identify which collection of variables offers the "best" prediction of statistic specific production at age 25. I used this same process to predict : Points, eFG%, assists, turnovers, offensive and Defensive rebounds, blocks, and steals.

Here is what I found.

NBA points per 40 is not easy to predict. College scoring only explains 16% of the variability in NBA scoring. While still leaving a lot to randomness, we can double this predictive power with a few additions. Including free-throw accuracy, weight, and maximum vertical jump while controlling for age, position and shot attempts helps explain 32% of the variability in NBA scoring. In sum, good NBA scorers scored a lot in college without taking too many shots, could hit free-throws in college, and were heavy and springy for their position. 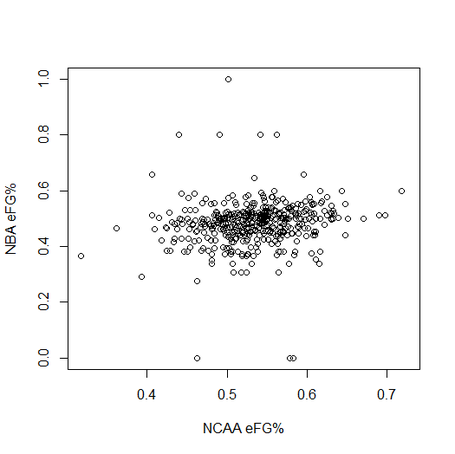 While shooting efficiency itself is a terrible predictor, we can get some information if we include additional variables. Players who scored a lot and had a reliable three-point shot have an efficiency advantage in the NBA. In addition, offensive rebounds, assists, and avoidance of personal fouls in college all speaks to more efficient shooting in the pros. The physical profile of a player who outperforms his college shooting efficiency in the pros is tall, heavy, fast, and springy, but with short arms. Think of Blake Griffin... or maybe an Allosaurus as the prototype for efficient NBA scoring. Putting all of these factors together and controlling for age, we still can only explain 20% of the variability in NBA shooting efficiency.

Now we get to the skills where NBA production is reasonably predictable. College assists alone explain nearly half of the variation in pro passing, but we can do even better than that. Interestingly after controlling for age and position the additional features that help explain NBA assists are "offensive rebounds" and "weight." Guys who are heavy and good at collecting offensive rebounds for their position tend to outperform their collegiate assist numbers in the NBA.

I can't help but think of this guy:

After adding in this additional variables, we can explain nearly 70% of pro assist rates.

Collegiate turn-overs themselves are a terrible predictor of NBA TO rates (r^2 of 0.07), so stop looking at those. However, some other statistics do step in to help explain NBA ball security. Controlling for position, players who can and do shoot threes improve on their collegiate TO rates in the NBA. Interestingly, offensive rebounding pops up again. Not only do collegiate offensive rebounders collect relatively more assists and shoot more efficiently in the NBA, but they also commit fewer turnovers. After including three point shooting, position, and offensive rebounding along with collegiate TO rate, we can explain just over 25% of the variability in NBA turn-over rates.

So those are the best models for individual box-score statistics. I bet you want to see those models used to build projected box score numbers for player's in this draft don't you? Too bad. That is what I ultimately want to do, but I still have a lot of additional work to do before I can produce useful projected box scores.

Most statistical draft projections strive to rank players in the draft, or give them a simpel composite score (like PER or Hoopus Score) that allows for comparison between drafts. This is a nice way to order prospects but it ignores two important issues in the draft decision. How can I distinguish the "safe" picks from the duds? and, if I am in the mood for a gamble, where should I put my chips?

The important variables that AIC pulled out are not terribly surprising. Production wise, scoring and passing without committing turnovers is very important. While in terms of physical features, being big (height and weight) and being capable of jumping high in the combine's maximum vertical drill are important predictors of NBA success. There is more to the story, but I am still trying to get these models ironed out and don't want to report details that are likely to change.

I would rather not report predictions for the current draft class until I have cleaned the models up. However... I don't think I will have more time to play with basketball stats for quite a while and the draft is coming up. So, here are the numbers. Take them with a big grain of salt.

Note: The three big names on Hoopus are probably Barton, Crowder, and Miller. This model really likes both Crowder and Miller (though in different ways) and is pretty uninspired by Barton, but doesn't hate him.

Retrodictions with out of sample draft classes: 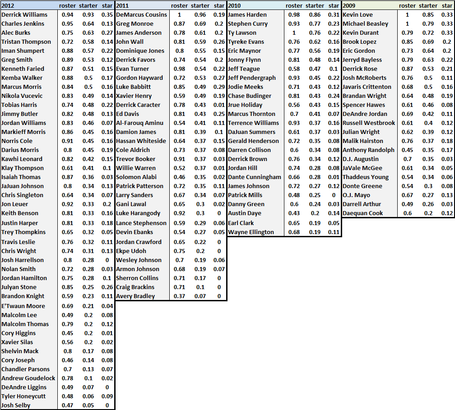