Share All sharing options for: Chase Budinger can haz your corner 3s (Breaking down the trade for Chase)

Not bad. Not bad at all.

We get busy with it below the fold.

OK, first things first. The chance of the 18th pick in any draft being more than a deep bench player is less than 50%. The chance of that pick being a star is roughly 5%. At the very cliched end of the day, Our Beloved Puppies just moved a mid-round pick that would have possibly been used on someone like Fab Melo, Terrence Ross, Perry Jones III, or Austin Rivers, for an actual living, breathing, average producing wing player.

Let that sink in.

After all the Wes Johnsons, Sasha Pavlovics, Rodney Carneys, and Damien Wilkinses, the post-KG Wolves finally have a player of average wing size and production.

Again, let that sink in. This time with an Orson Welles slow hand clap.

It is even better when you consider the other possible options within the Wolves wing universe.

The Budinger trade is especially beneficial when you consider that Kevin Martin was once rumored to be the target with the 18th pick.

Whether it is getting old or the rule changes, Martin's declining FTA trend should be enough to give the Wolves pause. His production is built almost entirely around efficient scoring...which is built almost entirely on his amazing ability to get to the line...which is collapsing. That big ol TS% doesn't mean a whole lot if you're not an elite three point shooter (he's not) and you don't get to the line at a high clip.

Instead of hitching their wagon to a sinking ship, the Wolves turned their 18th pick into this:

Remember, the Wolves' high end of winning is dependent on Kevin Love, Nikola Pekovic, and Ricky Rubio. The goal is to surround this core with as many competent players as humanly possible. The goal is not necessarily to get another star (although that would be nice); rather, to take average production and put it in the place of this:

Furthermore, Chase Budinger is exactly the type of offensive player that the Wolves thought they were getting in Wes Johnson: an athletic dynamo who can hit the corner three.

Zach Harper has the shot charts over at A Wolf Among Wolves. Here's Budinger's from beyond: 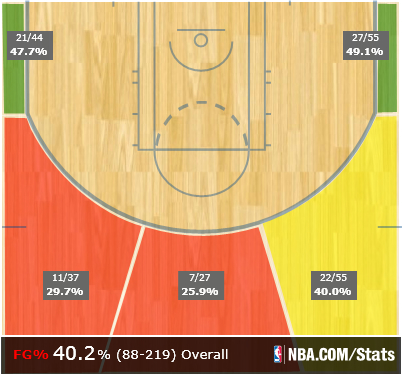 Zach goes on to show how the Wolves couldn't hit a corner three to save their own life. Budinger's ability to hit the corner three also fits well with Kevin Love liking the left wing and Ricky Rubio having a high number of assists leading to three pointers. Pick and roll, kick out. Wash, rinse, repeat. Also, Rubioops.

It's a good offensive fit. A really good one.

Another interesting aspect of this deal is that Budinger is on a 1 year option as the result of him being picked in the 2nd round. For the 11/12 season, he's basically giving them the production associated with the contract size of a Martell Webster (or other $4 for 4 Kahntract) on a deal that is under a million bucks.

However, here is my one main gripe with the deal. Actually, it's not really a gripe with this specific deal. Instead, it is a gripe with a front office that continues to put off dealing with the bottom half of the roster in a manner that is consistent with winning practices in the modern NBA.

If Budinger continues to be an average or a slightly above average player, he's going to get that Kahntract. Instead of using the 18th pick on a decent backup 4/5, or on a promising wing player like Will Barton or Jae Crowder, or instead of trading it for top picks in the 2nd round that could be used on guys like Kyle O'Quinn, Marcus Denmon, Crowder, etc, the Wolves traded for a guy that will likely get Webster-esque money with production that kind of matches the dollar amount on the contract.

This is fine and dandy in the short run but it really neglects the longer term health of the roster. NBA teams sink and swim with their top 7 roster spots. NBA teams like the Wolves have an extra wrinkle with their draft proficiency being even more leveraged than a team with a larger media market or warmer climate. The Wolves needlessly overpay for roster spots 8-15. They almost always have.

These sorts of sub-20/25 mpg players should be filled with as much 2nd round, 1 year deals, and D-League talent as possible. There are two values in the NBA: Awesome players on rookie deals and superstars. Everything else should be kept as value-based as possible. Solid close-to-average-as-possible production is the goal if you have 3 awesome players to build around. I get that this is nitpicking, but it seems like yet another part of the future being needlessly sacrificed for the 2-3 year Team Adelman/ETO window. Budinger is exactly the type of player the Wolves should be acquiring...for this next year. After that...well, we'll have to wait and see, as guys like Luke Babbitt, Crowder, and Barton could end up being a better value/deal with equal production.

Regardless of what happens with Budinger, this is the 5th pick between 16 and 23 that Kahn has traded during his tenure (2009 #18, 2010 #16 and #23, 2011 #20, 2012 #18--H/T Simitar). Those are a lot of potential productive and cheap minutes. If someone like Barton, Crowder, or even Miller turns out to be a good player, the Wolves could have had their production under lock and key for less than $5 mil over 3-4 years, depending on options. Instead, the Wolves, if they are lucky, will end up paying Budinger about $4 mil/year for his services. This sort of thing can be overlooked on a single case-by-case basis (as well as the fact that they need a single functional wing player...which is the ultimate selling point in this deal) but the mid-draft trades are starting to add up against the long term success of the overall roster. (This is to say nothing of the sorts of damage done by the Rambis buyout-a-thon. The reason why Budinger is on the block is because former Timberwolves draft pick Chandler Parsons stepped up in a big way during his rookie year. Also, try not to think about Nikola Mirotic. At all. Point being: these things add up.)

Wrapping all of this up, hopefully the Wolves can continue to build on this good initial move along with doing something to address the 8-15 spots on the roster in a more value-based manner. Making a modest offer sheet to Jeremy Evans might be another small move to keep things moving along. Here's hoping they can pull off either the Pau trade or move up to Charlotte's pick to grab either Bradley Beal or MKG. Short of that, moving up to get someone like John Henson makes a lot of sense. We'll have to wait and see. The next few days should be pretty entertaining.

(PS: I need to do some reading about Lior Eliyahu before I put up a post about him being included in the trade.)