The Question of Quincy

Share All sharing options for: The Question of Quincy

In the average NBA draft, there is usually one superstar, a couple of All-Stars, a handful of rotation players and a lot of players who will have very short careers. When there is the chance to grab one of those All-Stars, especially when it is at a position of dire need for the team making the selection, I think it is worth the risk.

Quincy Miller, in my opinion, is such a calculated risk. He's a swing-for-the-fences move. If it all works out how it should, Miller will be an All-Star caliber small forward and a poor man's Kevin Durant. If it doesn't work out, then the cost is minimal, given who else is available at that position.

Canis Hoopus favorites Jae Crowder and Will Barton have impressive statistical production from their respective seasons in college. In my opinion, however, neither one has the ability to be anything more than a solid rotation player in the NBA and neither will be able to turn the Wolves from a fringe playoff team to a contender.

Quincy Miller is capable of both. Much more below the fold: 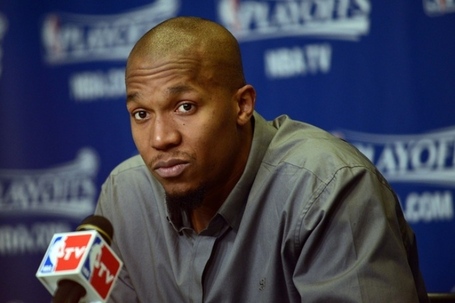 Outside of the top-10, the odds get even worse. From picks 11-30, only 40 players have become All-Stars, while 124 have failed to make it to a fourth NBA season.

At the 18th pick, where the Minnesota Timberwolves are selecting, 5 players selected have gone on to one or more All-Star games: David West, Joe Dumas, B.J. Amrstrong, Theo Ratliff and Mark Jackson.

The point is that for teams picking late into the NBA draft, the chance of picking an All-Star is very low. When an opportunity is available, even if there are some question marks, it is important to take that chance instead of taking the "safe" pick. Of course, given that nearly 1/3 of the picks made at the 18th spot are out of the league fairly quickly, even "safe" picks aren't sure things. 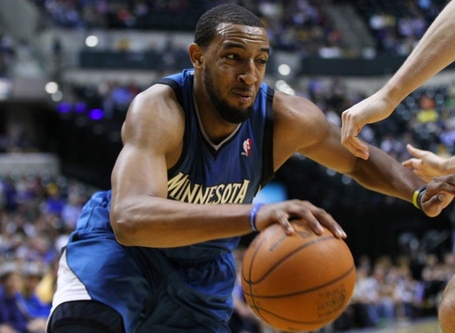 The Minnesota Timberwolves need an All-Star level contributor on the wing. It is almost impossible to get beyond the first round of the playoffs without one. Having role players is important, but it is very rare to see a team contend in the playoffs without a shooting guard or a small forward who can create his own shot and convert that shot at a high rate. LeBron James and Kevin Durant are obvious examples, but players like Paul Pierce, Manu Ginobili, Luol Deng and Shawn Marion have been vital parts of their teams' playoff successes over the past couple of years.

Currently, the Wolves have no replacement-level wings, let alone All-Star level wings. Unless you want to gamble that Derrick Williams is going to become that player, then the team is going to need to find him somewhere else.

A trade could serve that purpose. Andre Iguodala. Kevin Martin. Rudy Gay. These are talented wing players who would certainly improve the team. Of course, it is unknown as to whether those teams are willing to trade those players, and even if they are, are the Wolves willing and able to put together a good enough package to make that trade? If a trade for one of these players is possible, I would give away anyone but Kevin Love, Ricky Rubio or Nikola Pekovic to make it happen.

It is doubtful that free agency could serve that purpose. Eric Gordon and Nicolas Batum are skilled players, but their respective teams are likely to match any offer that the Wolves would make for them. It is hard to believe Ray Allen would leave Boston for Minnesota. O.J. Mayo might be available, but it is a longshot that he ever turns into anything special. The rest of the remaining wing free agents are role players - some better than others - but role players nonetheless.

The NBA draft may be able to serve that purpose, depending on how the Wolves use the #18 overall pick. There are a number of safe picks that the Wolves could make in this slot, such as Crowder, Barton, John Jenkins or Jeff Taylor. These players produced in college and there is a good chance they will produce in the pros, but each of them has a fairly modest ceiling. If the Wolves already had an All-Star level wing player, then they would all be excellent picks. As it is, however, they are not likely to be any better than the Danny Greens and Alonzo Gees of the world who come a dime-a-dozen in free agency. Would they be improvements on the Wolves' current crop of wing players? Of course. The standard, however, should not be "better than Wesley Johnson". The team should aim much higher than that. 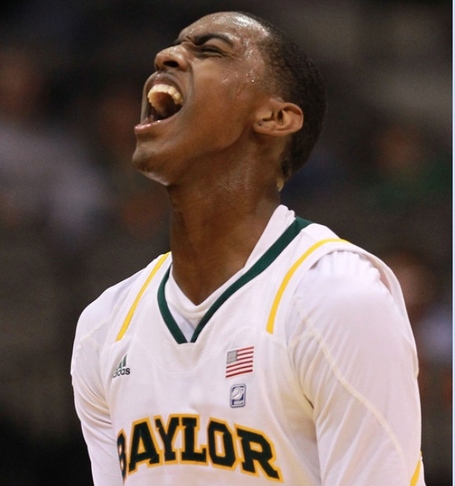 If Miller were a sure thing, he'd be a clear lottery pick. His statistical output this past season at Baylor was subpar. There are also questions about his motor and his toughness. Neither of these factors should be completely overlooked and teams should be paying attention to those signs between now and draft time. Fortunately, there are a number of positives that should not overlooked either.

In July of 2010, Quincy Miller competed at the FIBA Americas U-18 Championship in San Antonio, Texas, along with players such as Kyrie Irving and Austin Rivers. At the time, he was ranked by many as the number one prospect in his high school class and was compared to Kevin Durant by ESPN HS.

Unfortunately, Miller tore the ACL is his left knee in December of 2010.

"We were playing against our arch rival, High Point Christian. We were on the break, and I was doing an in-and-out move, and this kid kind of ran past me. I think his shoulder hit my knee — I know that sounds funny, but he was little, and he was trying to go for the ball — and my knee, like, popped. It really didn’t hurt that bad right away, and I actually stayed in the game for a while.

Then I came out. I couldn’t go anymore.

I tried to sleep on it that night, but we went to the hospital the next night and did an MRI, and they knew right away."

For Miller, an injury at that time of the year meant that he would not get to play in the McDonald's All-American game. He didn't get to compete in the Jordan Classic and he didn't suit up for the Nike Summit. Instead, he went through a seven-month long rehabilitation process.

Fortunately, Miller gained a new perspective after his injury:

"This is probably the best thing that's happened to me, even though it is kind of a negative," Miller said in January of 2011. "It's going to give me time to watch what other high school guys do, what I was doing, how I can change and get ready for college. It's going to enhance my work ethic to be even greater than it was before." 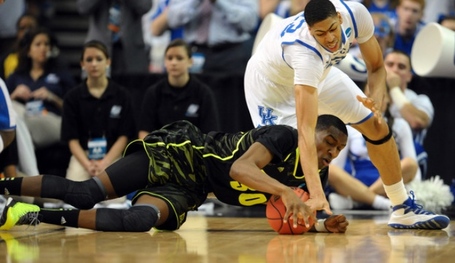 Miller joined the Baylor Bears for his freshman college season. Both Miller and the Bears started off the season strong. In his first five games, Miller averaged 15.2 points in 28 minutes per game and shot 50% from the three-point line. Against Texas-Arlington, he had 17 points (11-of-12 from the foul line), 11 rebounds and 6 assists. Unfortunately, Miller rolled his ankle in practice before the team's 6th game of the year, leading Miller to sit that game out and struggle in the next few.
Throughout the remainder of the year, Miller was inconsistent. He had 29 points on 17 shots against Missouri, but only had 6 points in 25 points of play against Iowa State. He also had an unremarkable NCAA tournament, averaging only 6.8 points on 35% shooting. Baylor finished with a school-record 30 wins, thanks to Miller and teammates Quincy Acy and Perry Jones III.

Nevertheless, in the season following a serious knee injury, Miller showed flashes of what makes him a special player. He's able to create shots for himself in isolation and off of the fast break, and thanks to his size and the quickness of his release, Miller is able to get his shot off against NBA-sized small forwards. He has terrific ball handling skills and footwork, he can operate on the block and at the high post, and he has impressive range, making him difficult to guard given his versatility. He's also a skilled passer. Since it can take up to 18 months to fully recover from an ACL injury, his explosiveness will continue to improve before the start of his rookie season.

Defensively, Miller needs to improve his strength and his toughness, but given that Baylor plays a zone, it is difficult to tell how effective Miller was on that end of the floor this past year. Statistically, he allowed opponents to score on only 27% of isolations last season (22 possessions) and opponents only made 31-of-110 (28%) jumpers against Miller.

Measuring 6' 8.75" without shoes and sporting a 9'1" reach, it is clear that Miller has the physical tools to be a disruptive force. He has the length and speed to contest opponent shots on the perimeter and to take away driving angles to the rim. One would hope that his blocked shots would rise as his explosiveness returns. 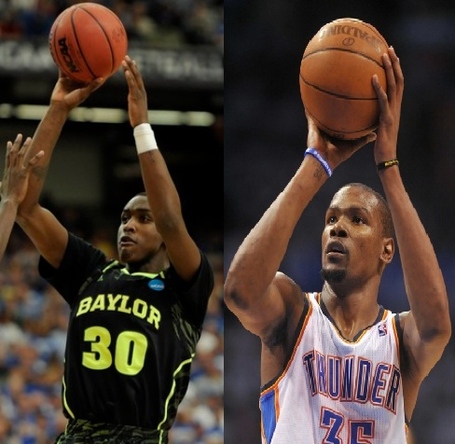 All of this is to say that Miller is, in my opinion, a low-risk, high-reward prospect. Is there a chance that he never adds strength, his explosiveness doesn't return and he never becomes more than a Marvin Williams/Al Harrington level of player? Perhaps. Miller is not as safe of a pick as many who will be available at the #18 spot. If statistical production in college is your main criteria for selecting a draft choice, Miller will leave you unimpressed.

If Miller lives up to his potential, however, he would be a winning lottery ticket and would turn the Wolves into immediate contenders. There are players as good as Jae Crowder and Will Barton in free agency. Unless the Wolves are willing to make a trade for a marquee wing player, then Quincy Miller is the Wolves' best (and really only) chance to acquire an All-Star level wing in the 2012 offseason.