One thing I can say with confidence is that the Andrei Kirilenko of 2009/10 and 2010/11 was a great player. Here are his PA100 and RAPM numbers for those seasons: 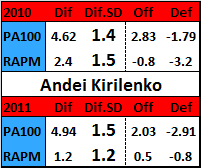 Note that Kirilenko was around 1.3 to1.4 standard deviations above the average player prior to leaving the NBA. That is all-star caliber production. No metric is perfect. There are biases in PA100 and error in RAPM, but when the two measures have this level of agreement, I am pretty damn comfortable getting excited about a player.

Of course... there is no hope of signing 28 or 29 year old Andrei Kirilenko. What we are interested in is the production of 31 and 32 year old Kirilenko. I attempt to predict that below the fold.

The difficulty in projecting Kirilenko is that he didn't play NBA basketball this past season. We should expect a player to decline slightly during his 30 year old season, but that is far from a given. Some players hold steady well past 30 and others completely fall apart around that age. This makes projecting players in their 30s using statistics 2-years removed problematic.

Thankfully, Kirilenko was playing for a top caliber European club rather than relaxing or slumming it in Y leagues last season. We have honest to goodness production data for Kirilenko in 2011/12, we just need a little help translating it. Thanks to John Hollinger and some simple conversions I added myself, we do have the ability to translate euro numbers (though with a lot of error). Here are the conversion rates for different box-score statistics:

If we apply those to Kirilenko's 2011/12 production, we can get a sense of whether or not he started his decline (you may need to expand the image):

It really doesn't look like Kirilenko lost a step last season. Other than his weirdly ballooned rebound numbers (likely due to a more post-oriented role) he looks like the same player. This observation makes me comfortable using Kirilenko's 28 and 29 year old numbers to project him forward.

At 31 years old, Kirilenko should start declining sometime soon. We don't know when and we don't know how rapidly, but we can at least use the age-specific rates of decline to help predict what he will bring to the table in 2012/13 and beyond.

Here are Kirilenko's age-projected numbers for the rest of his career. I set his 2011/12 production to the average of his previous two years in the NBA and then applied the expected decline to each successive year: 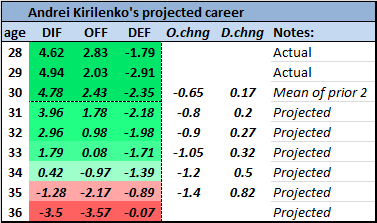 I would happily pay $9 million per for that kind of production over the next two seasons. A wing who performs better than a standard deviation above the average player would look really nice next to Love, Pek, and Rubio. That team would make the playoffs almost a given and competitive playoff basketball a reality. Hell... adding Kirilenko would put us a "Roy/Shved gamble working" away from becoming title contenders over the next two seasons. Sign me up.

As an added bonus, here is some fun math for you!