Share All sharing options for: AP: Kevin Love to Participate in London Olympics 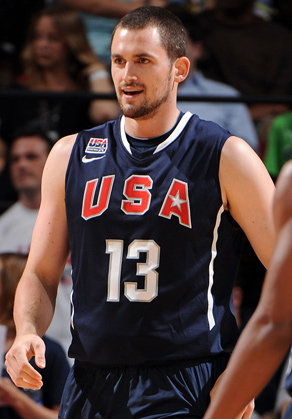 The person spoke on the condition of anonymity because the official roster announcement was not to come until later Saturday.

The team's statement is below the fold.

Love, who was named a finalist for the 2012 U.S. Olympic men's basketball team on January 16, was a member of the 2010 USA World Championship squad that went 9-0 and captured gold in Istanbul, Turkey. Named to the 2011-12 All-NBA Second Team, Love averaged a career high and single-season franchise-record 26.0 ppg (fourth in the NBA) while hauling in 13.3 rpg, second in the NBA, for the Timberwolves this past season. Love paced the NBA in double-doubles (48), finished second in minutes played (39.0 mpg) and ranked fourth in free-throws made (379). Love, who earned his second consecutive NBA All-Star Game selection, became the third player in NBA history to average 25+ points, and 10+ rebounds while making 50+ three-pointers.

The USA National Team is currently training through July12 in Las Vegas, Nev. The Americans’ Las Vegas training concludes July 12 (6:00 p.m. local time) with the USA Basketball Showcase that features the USA facing the Dominican Republic at UNLV’s Thomas & Mack Center. Tickets for the exhibition game can be purchased by calling 702-739-FANS or online at http://www.UNLVtickets.com/eventInfo/spe/310/usa-basketball/.

Following the USA’s training and exhibition contest in Las Vegas, the USA will move on to the nation’s capital, Washington, D.C., to train July 13-15 and play an exhibition contest versus Brazil at the Verizon Center on July 16 (8 p.m. local time). The game will be part of a doubleheader with the USA Basketball Women’s National Team, which will face Brazil’s Women’s National Team (5:30 p.m. local time).