The Brandon Roy Story: A Tale of Redemption or a Tale of Tragedy?

Share All sharing options for: The Brandon Roy Story: A Tale of Redemption or a Tale of Tragedy?

It's a good rule of thumb that you can tell how big of a deal a Wolves' press conference is by who shows up at it. For a player like Chase Budinger, there's a skeleton crew of characters. For a star like Ricky Rubio, practically the entire city shows up to Target Center.

When the Timberwolves introduced Brandon Roy, there was definitely a buzz amongst the media members and fans in attendance, and there were a number of faces at the press conference who don't show up to Target Center very much. You might be used to seeing them on television news or hearing them on their own local radio shows.

They got their money's worth today. Brandon Roy is a tremendously likable player who said all the right things and is confident about what he'll be able to do this season. He says his knees feel good and he is excited about playing a season with no minutes restrictions, like he had during his last season in Portland. David Kahn and Rick Adelman are confident about Roy coming in and playing well, but are also open about the fact that Roy will have to earn minutes and prove he can still play at a high level.

This is an experiment that could go tremendously well, or could also end in a sports tragedy. 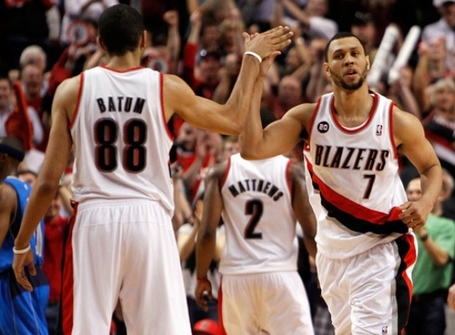 On April 23rd, 2011, Brandon Roy scored 18 points in the 4th quarter, and 24 overall, to help complete one of the greatest comebacks in NBA playoff history. At one point down 64-41 to the Dallas Mavericks, Roy shot 8-of-10 from the floor in the 4th quarter and added 4 assists to help the Blazers win Game 4 of the series 84-82.

"When people ask me what did I do in the fourth quarter [against Dallas], I'll tell them I stood in the corner and watched the Brandon Roy Show," said Gerald Wallace after the game. Kevin Love sat courtside for that performance in the Rose Garden.

As much of a highlight as that game was, it was also a lone victory in a sea of trouble for Roy during that year and in the months to follow. After multiple injuries and multiple surgeries, Roy was limited to under 25 minutes a game by the Blazers, and was frustrated that the limit often kept him out of big moments and big games.

On December 15th of that year, before the 2011-2012 NBA season began, the Blazers decided to use the amnesty clause to waive Roy. His agent, Greg Lawrence said at the time, "this gives some closure. Brandon's fully at peace." Roy, however, claims that he never wanted to retire from the Portland Trail Blazers, but that those decisions were made based on recommendations from the Blazers medical staff. 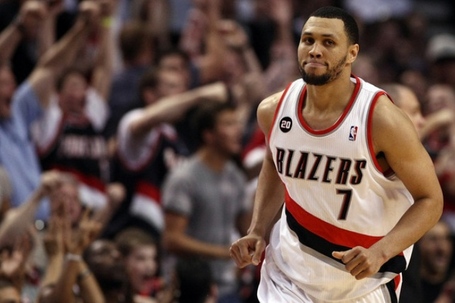 Once the season ended, Roy and his agent began putting out feelers to see if any teams were interested in him, and there were several who were. Looking back at that game against the Mavericks, Roy said, "It played a big part, not necessarily just that game but I felt good that series. That really helped with my decision to come back, just because of everything surrounding it, maybe doubting myself, not sure I could still play at that level. To go out and have that performance, it was pretty special."

Not long after Roy retired, his former teammate Nicolas Batum predicted, "he'll be back," and even expected Roy to be able to return to All-Star form. Batum stressed that it was important for Roy to take some time to take care of his body, but that at his age, he could still play another "eight, ten years".

Of course, that's the optimistic view. That's the view that forgets that Brandon Roy's meniscus will not grow back. Unlike some players, Roy cannot just undergo microfracture surgery or rehab it to help the cartilage grow. Roy will have to play in his condition for the rest of his life. Roy is playing bone-on-bone.

Brandon Roy has been undergoing blood drawing and spinning procedures in Los Angeles. As Roy describes the procedure, "It's something where they draw my blood, they spin it, they pull some different things out of it [and] they inject it right back into the joint. It was five shots. It was on each of my knees. Ever since then, it feels great. I was smiling going in there to get the next one and I don't really like getting shots."

Roy says that this procedure allows him to work out as intensely as he needs to for the NBA game, without feeling significant amounts of pain during recovery. He cited Kobe Bryant, who has also been a recipient of the procedure. If Kobe had the procedure and can play as well as he played during the 2011-12 season, Roy surmised, then it could definitely help him. 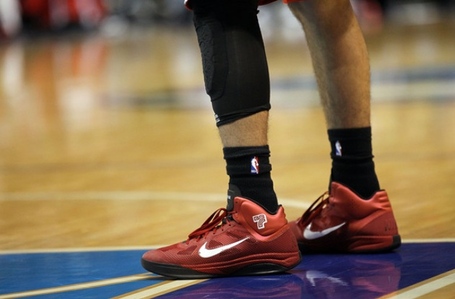 Roy said that he did not sign up to be a 10th man and that he wants to be in there for the big shots and the big moments with this team. Clearly, the Wolves organization and their fans are hoping for the same things. In July, when the Twins are in the middle of another losing year, the Vikings are still in a rebuilding stage and the Wolves appear to be trending upwards, a Brandon Roy Redemption Story fits right along with the narrative. The bandwagon is starting to get full. Talking to some representatives from the Wolves' sales team today, they all said that calls and ticket sales have started to increase significantly.

When expectations do not line up with reality, however, it can lead to a very unkind ending. If Roy is never able to return to his former self, or even a close approximation of his former self, will the coaching staff and the organization ask the questions that need to be asked? If Roy cannot withstand the rigors of high minutes, back-to-backs and an 82-game schedule, will Adelman be able to put him on a minutes restriction or a games restriction? If Roy's play is hurting the team, will Adelman be willing to sit him in favor of younger and less experienced players like Alexey Shved or Chase Budinger? If so, will Roy be able to accept this treatment for the good of the team?

Roy is a very mature, very self-aware individual who by all accounts is great in the locker room and as a teammate. He appears to know that he has some things to prove. He is also a very competitive individual who still remembers what he did against the Mavericks and what he did to earn himself a selection to three NBA All-Star teams.

In the best case scenario, Roy returns to pre-2010 form and turns the Wolves into a playoff contender. In the "I can live with this scenario," Roy is not at an All-Star level, but can contribute with Adelman getting the best out of him in a realistic role. The worst case scenario is too tragic to even want to contemplate, for both Roy and the Minnesota Timberwolves.

Here's to hoping that Brandon Roy keeps giving big name media members a reason to come out to Target Center, and that this time, the Redemption Story has a happy ending.