Share All sharing options for: Gold and Going Forward 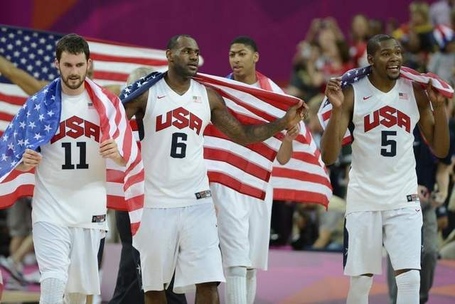 Love has his gold medal. And, if FIBA chief Patrick Baumann's comments mean anything (and they do), he will probably get a chance at a second one. Congratulations to Love and Team USA.

Also also, let's applaud Spain for being the best competition USA basketball has seen...well, probably ever. Juan Carlos Navarro and the Gasols gave Team USA all they could handle. And did so, I might add, without a true point guard on the floor most of the time. One has to wonder what the outcome would have been had a certain Spanish Unicorn been healthy....

And adding to the bright future here in Puppyland, Russia won it's first ever basketball medal behind two new Timberwolves. Andrei Kirilenko put in 20 points, 8 rebounds, 2 assists and 2 blocks, and Alexey Shved added 25 points, 5 rebounds and 7 assists, as Russia took down a game Argentina. The US knows first hand how hard it is to beat a Manu Ginobili team.

So you've got three (technically four, I guess) Olympic medalists on your favorite basketball team this season. Not half bad.

Oh, and as a little side note:

Before the Los Angeles Lakers tradedAndrew Bynum to the Philadelphia 76ers, the Lakers tried to peddle Bynum to the Timberwolves, who said no thanks.

I'm guessing they asked for Love. Be glad they didn't offer Pau Gasol instead; Kahn might have actually gone for that one.