Note: In an SB Nation first, each team site will be contributing an article on a cult favorite player today. Check out more around the network by visiting our NBA blogs, and searching on Twitter for the hashtag #NBACultClassics.

I was tempted to make Mark Madsen our man for this. After all who could forget this legendary performance, where Mad Dog managed to jack up 7 threes en route to a 1-15 shooting night (2 points) the last game of the 2006 season. (That game, sadly enough, still went to double OT...) Dwane Casey had orders to throw that game, and throw it he did.

But when talking about a guy who built a special kind of legend here in 'Sota, the gold standard can be none other than the one and only Corey Brewer, who became such an icon (or something...) that he generated a new lexicon of terminology and even a drinking game.

No player in Wolves history has perplexed the fanbase quite like the love/hate-able Corey Brewer. He truly is the NBA's box of chocolates. Sometimes he gives you this (#6):

And then sometimes he gives you this:

I advocated strongly for Corey in the 2007 draft. The reason was we had just spent the 06-07 season watching Kevin Garnett bite everyone's head off for having no clue how to play defense. I thought that with Corey, we'd have at least one player KG wouldn't have to physically grab by the jersey and drag to the right spot on the floor.

Of course, wouldn't you know it, a month after Corey was drafted, KG was traded to the Celtics. Suddenly his defense was going to mean nothing and his offense would be a major liability. Typical Timberwolves timeline. Go figure.

Still, I don't regret it. Yes, Corey had a lot of frustrating moments...a lot of bad passes, awkward attempts at dribbling, terrible shots. He'd bounce the ball off his own feet. He'd airball from the free throw line. He generated countless fights here on CH.

But he also gave every minute of every game 1000%. And, let's be honest....he was about the only entertaining thing we had going for us for two years running. Without Corey, we'd never have coined the term Brewsist, which means we'd never have started the Brewsist Drinking Game, which means 90% of us probably would have never made it through the 08-09 season. 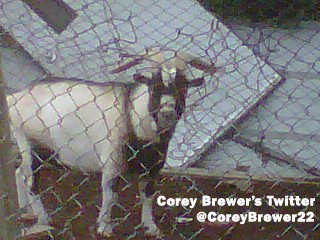 So here's to Corey, and the many wonder amazing terrible things he did for this team. We never knew what you meant to us until you were gone. (literally, as Wes Johnson proved to be very much not a suped up version of you) I was happy to see you sign possibly the best waiver wire contract in NBA history, and still believe you will have a long and successful NBA career.