Best. Trade.(s) Ever. - The Summer of Sam and Spree

Share All sharing options for: Best. Trade.(s) Ever. - The Summer of Sam and Spree

Continuing our SB Nation league-wide theme posts, today we look at the best trade(s) the Timberwolves made in the history of the Timberwolves. Check out everyone else's roundups here! 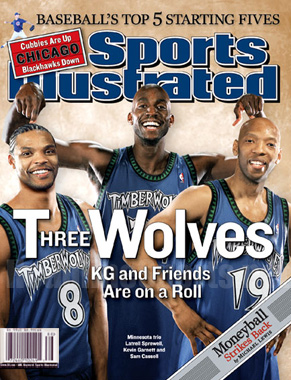 The Timberwolves are a study in extremes, when it comes to trade history. On one side of the coin, you have Ray Allen for Stephon Marbury, Sam Cassell for Marko Jaric, Roy for Foye, Al Jefferson for.....uh....what did get, again?

On the other side, you have OJ Mayo for Kevin Love, Mike Miller and Foye for Ricky Rubio, mid-to-low-level draft picks for guys like Michael Beasley, Anthony Randolph and Chase Budinger.

So it's not all doom and gloom here. Even when we dealt The Franchise (that would be Kevin Garnett, for you poor souls who never got to listen to Kevin Harlan and Trent Tucker) we still managed to get a 21 year old 20-10 player in return. There are good trades to pick from here.

But let's be honest. The final, ultimate measure of a trade is the end result. And by that metric, there is only one, inarguable, summer to look at: 2003. The year Sam and Spree came to town.

Yes, I'm cheating a bit here by considering this effectively one deal. Because honestly, that's basically how I remember it, and I think most of you do as well. We don't think of it as "we got Cassell, then we got Sprewell". We think of it as "We got Cassell and Sprewell". At the start of the offseason, they weren't on the team. At the end of it, they were. Right?

So let's make it simple: this 'trade' wins the contest. Nothing else in Wolves' history even comes close, for one single reason. Nothing else we did ever got us to the Western Conference Finals.

KG, for all his monumental achievements and statistics, had a very basic game when you got down to it: he was going to facilitate and defend. That left other roles still needing to be filled, at other positions. A go-to scorer. A wing defender. Competitive fire. Sam and Spree added everything this team needed around Kevin Garnett. Now all the bases were covered.

Sam was the go-to guy. Sam was the alpha dog. Sam could gun it from any range, at any angle, with anyone in his face, and burn the nets to the ground.

Two years ago, I reflected back on how one of my all-time favorite Timberwolves moments was a game we lost, and that's still true today. Sam Cassell, Game 1 of the 2004 WCF...he put on a show that defied description. He absolutely, positively, unapologetically refused to miss:

The reason this game will forever be etched in my mind is because it was the first time I had ever watched a player with "Timberwolves" on his uni decide to flat out take over a game.

It wasn't a hot hand strategy. It wasn't playcalling. It wasn't teammates deferring or a favorable matchup or any number of situational contexts. It was Sam Cassell deliberately deciding he was going to be The Man for his team, and then delivering.

That's not something Garnett could ever do. It just isn't in his DNA as a player. It's something that became plainly obvious when he moved to Boston and eagerly deferred to Paul Pierce's shooting. It's a big part of why the Wolves never made it out of the first round with KG, except for the one season Cassell was here and in top form. We needed Sam.

And we needed Spree. For one, Wally Sizzlerbean spent pretty much that entire season on the injury list. That made Sprewell the only respectable scoring force at the 2/3 spots. He also added some much needed versatility to the team, because let's be honest....Szczerbiak was about as one-dimensional as it came.

Because of the off-court nonsense, people tend to forget how phenomenal a player Spree was over the course of his career. In his first five seasons (all with Golden State), Spree averaged 20 points, 4.3 rebounds, and 4.6 assists (with a single season best of 24-5-6). He competed like a madman. He defended like a madman. He dunked with the kind of anger and authority that made other players visibly cringe.

He had 11 years of wear on his legs by the time he arrived in 'Sota...most of them spent playing out of position with the Knicks...and still maintained his trademark versatility (16-3-3.5) and competitive fire.

And that competitiveness. That insane, raging fire Spree had burning in him. That, maybe more than anything, was what drove the Wolves that year:

I clearly remember when the Timberwolves acquired Latrell Sprewell from the New York Knicks, and that had as much to do with Kevin Garnett's excitement as my own.
Garnett could not have been happier. Sprewell was more than just a great basketball player. He was a strong personality and fierce competitor. Finally, someone who would match KG's competitive spirit. Finally, someone who would match KG's emotional intensity.

To Garnett, Sam Cassell was a welcome addition and fantastic friend, but Spree was so much more. KG and Spree were kindred spirits. Cut in the same pattern from the same cloth.

Garnett has drawn comparisons to Tim Duncan all his career. About the same age, about the same height, play the same position. Etc and so forth. But there are obviously differences in skills, and a huge difference in demeanor.

Tim Duncan is a philosopher. No yelling, no fist pumping, no trash talking (or at least no audible trash talking...) Calm and collected. Even his complaining to the refs is nothing more than a wide-eyed stare.

Garnett, on the other hand, is a demon. Wild, enthusiastic rage. He talks trash. He screams at everyone and their mother. He's taken swings at other players more than once.

Yet for pretty much his entire career in 'Sota, he was surrounded by philosophers. Googs was a philosopher. Wally was a philosopher. Terrell Brandon was a philosopher. With Spree, KG finally found a teammate he could let loose with. Someone who could out-yell, out-rage, out-crazy him. It was important. It put KG in his natural element. It gave an injured, aging, overmatched team an edge it badly needed.

There's still a lot of history to be written. As far as NBA stuff goes, the Timberwolves are still teenagers, as a franchise. The future finally looks bright again here. Love and Rubio have a lot of time to accomplish a lot of things...hopefully together. Hopefully as Timberwolves.

But every trade is judged by it's outcome. Sam and Spree put us in the WCF. They gave us the most successful iteration of the Timberwolves ever, and it's not even close. Best trades? No contest.