Getting Ready for SB Nation United

Share All sharing options for: Getting Ready for SB Nation United

As we have alluded to a few times now, SB Nation will be undergoing a big redesign and restructuring soon, which will change the look of the individual blogs across the community, as well as link them more fluidly together to create a truly united blogosphere.

This change is not just a new coat of paint to make the site simpler and brighter (although that is true). It's also a fundamental change to the layout and structure that will make it easier for S-n-P and myself to create, update, and organize content, and make it easier for all of you to find what you're looking for, add your own stories, and interact with each other.

The first benefit is the cover/features system, which will allow S-n-P and I to pin stories to the top of the page, making sure important stuff remains at the top of the front page for as long as it's relevant. There are also options to move around fanshots and fanposts, and dynamically edit stories as a 'stream' without having to clumsily write in 'EDIT:..." over and over again.

The cleaner structure will also translate into much faster loading times (a personal favorite, as the current site can be obnoxiously slow at times), cut down on how intrusive some of the advertisements are, and will allow the full site experience to be viewed on mobile, both phone and tablet (something I'm sure S-n-P will greatly appreciate)

And of course, we'll still retain the uniqueness of our Canis Hoopus community, one of the most unique in all of SB Nation. (Seth Pollack is both highly amused and perplexed by our recipes)

I've spent time playing around with the beta and am quite impressed. The new site tightly integrates the tools we use with a much cleaner design, which will give longtime users a more seamless experience, and also keep new users from being bombarded by the current level of randomness.

As a preview, our sister blog Nets Daily has kindly set up and screenshot their beta site as an example of the new design: 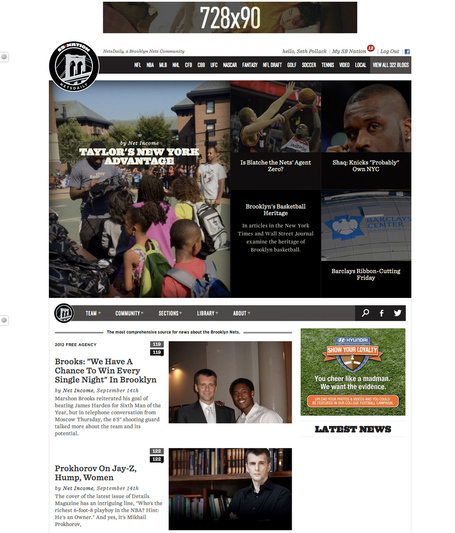