Biggest Disappointment: That time when Marbury...

Share All sharing options for: Biggest Disappointment: That time when Marbury...

Another Wednesday, another entry in the league-wide blog series. Check out the index for this week's theme, as we talk about each team's most disappointing.... 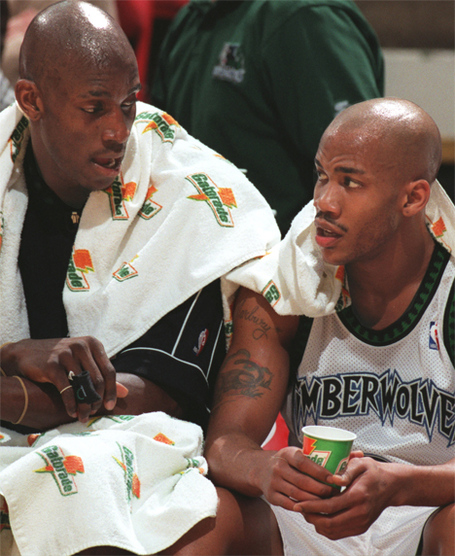 It would have been so very easy to talk about that time when Kevin Garnett was traded to Boston. I can't imagine anyone who wasn't disappointed by that. Not so much that KG was gone...although that wasn't any fun, by any means. But more the long perspective of having fought and struggled alongside The Franchise for 12 years, then learning there was no payoff in the end. While KG's contemporaries...the Kobes and Duncans of the world...were making playoff runs and winning MVP trophies and championships, Garnett had wasted the better part of a decade simply holding together a team that would have otherwise been downright awful without him. 12 years is a long time to figure out how to make it work. The Timberwolves never did. Garnett does not have terribly fond memories of this franchise, and I don't blame him. We let him down.

But as I thought about this over the course of the day, I realized that that wasn't the biggest disappointment of this team's history. By the time KG actually left, the dream of winning it all with him had already died. We had lost faith in our franchise's front office long before then. It just took a couple more years to finally bury it.

No, I realized that the biggest disappointment I've ever experienced with the Wolves wasn't when KG left. It was when Stephon Marbury left.

Yes, our front office let Garnett down, but no one let him....and us....down more than Marbury.

I know Steph has a less-than-sterling reputation here, and that's deserved. But let's also be clear about something right up front: Stephon Marbury was a hell of a basketball player. In just his first two and some-odd-change years in 'Sota, he averaged 16-8 (PER of 16 and WS/48 approaching 0.1) He had prolific outbursts of scoring. He made passes that would have awed Jason Williams. He left his official calling cards in the playoffs (including helping lead the Wolves to their first ever playoff win), giving Clyde Drexler and Gary Payton all they could handle. And that was just him getting started.

By the time the 98-99 season came around, Starbury was a sensation, putting up some ridiculous performances. 23-15 against Sacramento. 25-16 against Golden State. 40-12 against Houston. People were beginning to speculate he'd break the assist record for any player's first three seasons. He was Kidd with a scoring touch, Iverson with size, Stockton with dazzle, and the combo of him and Garnett was being dubbed the next Stockton and Malone. And even further, he and KG weren't just teammates; they were best friends. Kindred spirits. They did everything together.

Well, it was more complicated than that, obviously. Like any messy breakup, what happened depends on who you ask. Marbury said he was homesick. Flip Saunders said it was jealousy of KG. Marbury's agent, David Falk, claimed Steph didn't like McHale or how he was being used in the offense. Etc etc etc.

The truth probably triangulates somewhere in the middle. In any case, Marbury forced his way out, in a massive trade that moved him to New Jersey, Sam Cassell to Milwaukee, and Terrell Brandon here.

And the Wolves just never quite recovered. Even to this day.

It really was just a hollow shock. Garnett leaving, we all saw that coming, and we accepted it had to happen because he just wasn't getting anywhere and we weren't going anywhere. But Marbury....that was the death of something on the rise. Something special. And it didn't happen by attrition or necessity, but by ego. I was very upset watching that Wolves/Sonics game, March 9th, 1999. Marbury was checked out. Garnett did everything he could to engage him, and Steph just looked the other way. Like KG would say afterwards, you just somehow knew that that was the last time they'd take the court as teammates.

The sad part is that not only were they good friends, they were perfect teammates. Everything that one needed, the other could do. Marbury was the explosive scoring force KG needed...the kind of dominant lead guard the Wolves have had only one year since (Cassell) and never found in Brandon or Hudson or Jaric or Foye or any of the journeymen 2 guards that have come and gone. (and let's remember that healthy Terrell Brandon was a hell of a basketball player as well....just the wrong type) KG needs a go-to scorer as a teammate. Marbury was one, and that's the cruel irony. He was jealous of Garnett's A1 status, when KG himself needed to (and probably gladly would have) deferred to Marbury in those moments Marbury craved to be the hero in. The Wolves never could quite recapture the magic of those early years, even in the WCF run of 2004. Marbury left KG out to dry, and we're still picking up the pieces of that 13 years later.

But even sadder is that neither of them have ever gotten over it. Garnett can't stop thinking of Marbury as his bro. Marbury can't stop resenting Garnett. 5 years later, Marbury could still leave KG in tears when he called him soft and told the media he was afraid of Amare Stoudemire. As recent as 2009, the duo were still a 'tip-toe' subject, with Danny Ainge and Doc Rivers seeking KG's explicit permission to add Marbury to the Celtics' roster (KG was hurt the end of that year...they never actually played any games together) It's the kind of sad, hollywood, Shaq/Kobe kind of thing that's become NBA legend and will follow them both the rest of their lives. And it shouldn't have ever happened.

So yes, the most disappointing....whatever....in Wolves' history. That time when Stephon Marbury ruined a friendship, and ruined a franchise. KG leaving hurt, but it was ultimately the acceptance of something bad. Marbury leaving was the too-early death of something good.