The tragically backwards return of no 'D' in Dallas

The defense goes missing in Dallas again, but this time for the away team

Share All sharing options for: The tragically backwards return of no 'D' in Dallas

That was the glorious Don Nelson era, in which he truly began trying to implement a 5-equal-parts offense around the rising duo of Dirk Nowitzki and Steve Nash, which resulted in such a dynamic offense and anemic defense that announcers would regularly describe the Alice D as "5 guys just standing around, waiting to get the ball back." Not exactly a glowing endorsement.

To their credit, the Mavs turned it all around post-Nellie, with a couple of hard-nosed coaching changes and the arrival of standout career defenders like Shawn Marion, Tyson Chandler and Jason Kidd. It worked so well, they won a championship. And they enjoyed that so much, they completely blew up the team the next summer. Go figure.

So one might not be that shocked to hear there's a lack of D in the American Airlines Arena again....until you hear that the deficit is from the visitors.

And in an extra effort to not help themselves, the Wolves channeled today's 'Sota weather and shot just 41% from the floor themselves. Pekovic....well, he could have been better from the line, but his 20-12 game was typical bullishness. But the rest of the starters went 13-43 like they got ambushed by Mr. Freeze. 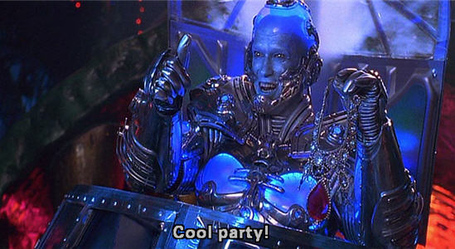 (does 6-18 from The Inferno warrant a 'hell's frozen over' joke? Deep thoughts, brought to you by tonight's game wrap)

The bench more than did it's part, but if the starters don't pull their weight and the bad guys shoot like it's nerf balls and hoola hoops, it ain't gonna matter much.

Say what you want about Minnesota's offense...and it's not good, by any means. But the real problem, sadly, ironically, tragically.....(Spiritually, ecumenically....grammatically....?)....is turning out to be the lack of defense.

There is no D in Minnesota. Now in more ways than one.

And as a parting note, be glad Chris Nolan came along with his new Batman when he did. Because WB had a sequel to Batman and Robin starring Nic Cage and Madonna all planned out.

Everybody run for your lives.