Share All sharing options for: A last resort to out-fly a rocket (Min/Hou wrap)

Tonight's tilt can be verily summarized in 16 seconds.

There's something energetic about seeing a well-executed ally-oop. It's almost like free points. As long as the allyer can kind of aim and the ooper can catch, it's pretty much a guaranteed 2 points. Basketball at it's simplest, and as we've learned through trial and a lot of error these past, oh, 9 years, simplest is the best....est....

And there's something intriguing about seeing new faces, even if they're not exactly the kind that turn the league upside-down. Chris Johnson and Mickael Gelabale aren't exactly Dwight Howard and LeBron James. But you'll forgive His Beardness and the Rockets if they couldn't quite tell the difference tonight. The Breakfast Club led a spirited, fan-enthusing charge while the Rocket-powered offense flew about as far as your typical North Korean experiment of the week.

(Although, for the record, NK recently managed to successfully put a satellite in orbit, which is pretty damn scary if you really think about it)

Think about this for uno momento. Love: out. Budinger: out. Pekovic: out. Shved: out. Lee: out. Cunningham: out (!!!!). Sans-newbies, that would have left the Wolves bench as literally....literally.....nothing but Amundson and Barea.

So the new guys got signed, and came off the bench, and they did their part. 26 points on 10 FG attempts. Channeling their inner Kirilenkos (Kirilenkoes...?) Which worked out pretty damn well, since the actually Kirilenko put in 21 points on 11 FG attempts himself. So that's 47 points on 21 attempts. Yep.

Now, before we all go Lonely Island (Youtube the song, you'll get it..........) let's remember that it's one game, and new guys always screw up the other team no matter what. NBA defense is like, 90% preparation. Game tape, practice, communication. Study what the other guys do and then work out ways to stop it. But with two guys who haven't played NBA at all this year, there's nothing to study. Can't predict something unprecedented.

Plus, it was still the starters that really built the winning margin.

That said, everything starts somewhere, and you couldn't have possibly asked for a better start for the latest dynamic duo. When you grab two names seeming at random out of complete obscurity, you don't expect much, but tonight, things went all 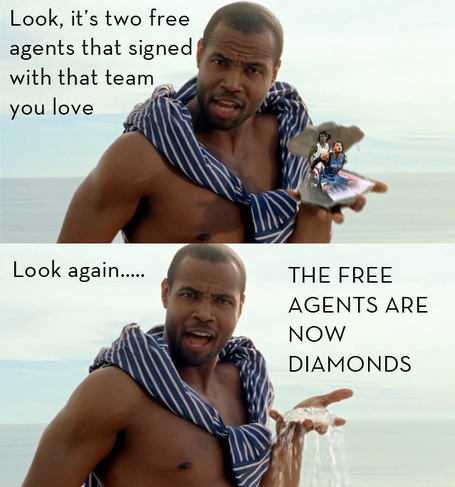 We'll see where Johnson and Gelabale ultimately land as players for the Wolves (assuming they're around long enough). One would certainly not expect them to shoot a combined 70% the rest of the year. And well, what Chris the Son of John did tonight is kinda what Chris the Son of Andreu has been doing for a decade (I'm not sayin....I'm just sayin'...) But tonight they played a big part in halting 'Sota's skid, and got the crowd at TC louder than they've been in weeks. That's definitely something.

Game # Ugh: On The Road To Ugh (Wolves V. Rockets)