A barn the size of Montana (aka a MIN/UTH gamewrap)

The Timberwolves' shooting goes colder than a winter in Duluth

Share All sharing options for: A barn the size of Montana (aka a MIN/UTH gamewrap)

Your starting paint duo of Love and Pekovic went a combined 8-23 from the field. Not to be outdone, your high-scoring backcourt duo of Shved and Barea went a combined 4-18. That means the four players the Whimperpups rely on for most of their offense managed just 41 points in 41 shot attempts.

If that's not St Louis County cold, what is?

(Actually we should give Duluth a break. They've been through enough this year already, right?) 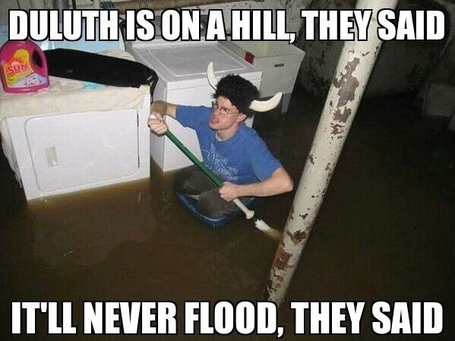 FWIW, the former Wolves who played tonight in Jazz uniforms put up just 16 points on 17 shots.

And Beasley is currently 1-4.

And well....I'm starting to feel vaguely responsible for all this for no particular reason. I'd say it's something in the water, but all our water is frozen.

Bottom line is, even when you make 24 free throws, clean the glass, limit your turnovers and your fouls, you're not going to win many games when the good guys shoot 34% and the bad guy clock in at 50.

All that on a night where 'Sota couldn't hit the broadside of a state with a 545 mile long border. What more need be said?