Day one at Timberwolves training camp is complete at Minnesota State University in Mankato. Corey Brewer impressed early, Derrick Williams played heavy amounts at both forward positions, and the Love/Rubio/Pekovic trio was finally reunited on the floor.

Timberwolves basketball is officially back, and Ricky Rubio, Kevin Love and Nikola Pekovic have already surpsassed their on-court minute totals as a group  from last season.

The media was allowed into the Taylor Center in Mankato, Minn. with a few minutes remaining in the practice's final scrimmage. The lineups were presumably what will be the main first team versus the main group of reserves: Rubio, Martin, Brewer, Love and Pekovic vs. Barea, Shved, Williams, Cunningham & Johnson were the lineups, but everyone played at some point in the scrimmage's final 4-5 minutes.

There wasn't enough gameplay to gauge anything from an on-court standpoint, but here's what I got today:

The first two plays in the scrimmage put everyone in a good mood about Corey Brewer. He started by hitting an open three-pointer, and followed on the next play with an and-one. Rick Adelman was clearly a big fan after the first day of practice.

"I was very pleased with Corey Brewer, I thought he played very well," Adelman said. "He's in great shape, he's constantly moving, he's going to be a great addition for us."

With Budinger injured (timetable for return still unknown), Brewer's biggest competition for minutes at small forward is Derrick Williams. D-Will came into camp claiming to have slimmed down to 235 pounds, and Adelman decided to test out his slimmer frame, matching him up with Brewer (even a little against Kevin Martin) for a majority of the scrimmage.

"Guarding Corey Brewer all day is going to be tough, I'm looking forward to it," Williams said. "I always want to challenge myself. If I'm guarding him for three-and-a-half hours a day, I'm going to get better." 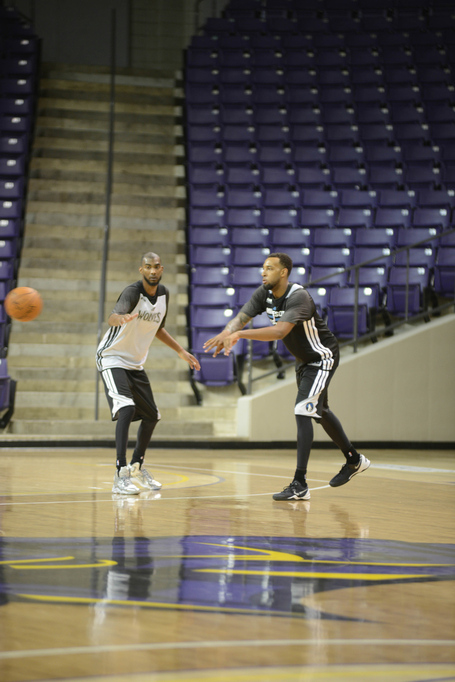 One challenge the Wolves have had to deal with over the past two seasons has been keeping Kevin Love (who really looks to be in good shape coming into the year, by the way), Ricky Rubio and Nikola Pekovic on the floor together. So far, so good.

While it was just four minutes, the three of them played well together for the most part. Other than a pair of dropped passes by Pekovic in the post, their chemistry from past seasons still seemed to be there.

Perhaps the best play of the night brought Love into the post from Rubio, while an off-ball screen by Pekovic left Kevin Martin open for a corner three-pointer, which of course he knocked down.

That's pretty much it from day 1, and this is going on all week. If there wasn't a new no-twitter rule during scrimmages, I would have more stuff live for you, but there will still be daily updates. Stay tuned Canis.