Thanks for the fun, Mankato.

"It was their own doing," Rick Adelman said.

Due to missed free throws and "other stuff", practice went extra long today as training camp in Mankato came to a close for the Timberwolves, who will now set their sights on Monday when they open the preseason back in Minneapolis.

The media was not let in today until after a set of scrimmages had completed. The word was that the B-squad (the bench squad) won the final scrimmage, but the group of starters (the A-squad) had their way in the first few. Even with the success of the starters on the scoreboard, head coach Rick Adelman was not entirely satisfied with where their heads were at.

"Our concentration on the defensive end, especially the veterans, has not been the quality we need," he said. "We'll see how that goes as the weeks move on and we start playing games and see where we are."

What was also evident for coach Adelman on the final day was a level of fatigue, especially for the guys who played in the FIBA tournaments over the summer. He mentioned Rubio and Barea in particular, and with that, it wouldn't surprise me to see more of A.J. Price and Lorenzo Brown in the preseason. 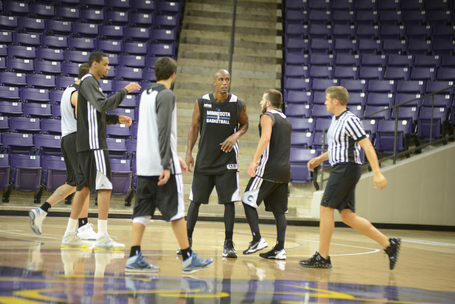 With the preseason starting up, and a total of 4 games slated for next week, Adelman is planning on cutting down on practice time, something Kevin Martin is plenty fine with.

The Wolves now set their sights to Monday, when they open the preseason at the Target Center against the Russian basketball powerhouse CSKA Moscow. The former club of Alexey Shved, CSKA finished third in the Euroleague last season, and won a championship back in the 2007-08 season. Notable names on their current roster include Nenad Kristić, Victor Khryapa, Sonny Weems, and Jeremy Pargo.

The game will be at 7pm, and will be shown on FSN. Still, Canis will have it covered. Now it's time to go back home. Thanks for the fun, Mankato.