Euroleague Round 4 & European NBA prospects on the horizon

Euroleague continues with its fourth week of competition. Aditionally to the results and individual performances of the participating players, we will take a look at a number of undrafted teenage basketball pros born between 1992 and 1996 who will be on the NBA radar in the next few years. Each week, I'll present 4 prospects, starting with guards today.

Share All sharing options for: Euroleague Round 4 & European NBA prospects on the horizon

The game of the week was played between top teams Barcelona, under pressure after a 1-2 start, and CSKA Moscow who could have gone to 3-1 while pushing Barca to 1-3. The clubs didn't disappoint with a close game that eventually turned unlucky for the Russian side.
CSKA looked sharp in the first two quarters, taking a 40-35 lead into halftime. Juan Carlos Navarro could be contained by CSKA's defense in the first half and allowed only three points by 'La Bomba', but with another loss glooming, Navarro stepped up in style, scoring 17 of his 20 points in the last two quarters, giving Barcelona a much-needed win. Still behind by only four points with 8 minutes to go in the fourth, Moscow just couldn't stop Barcelona's hot offense (9-20 threes), and a couple of consecutive baskets by Navarro, Tomic, Huertas and Lampe sealed the game for the hosts.

Brose Baskets Bamberg 62 - 76 EA7 Emporio Armani Milan
In another game between 1-2 & 2-1 record teams, Bamberg missed the chance to secure a comfortable lead at the third spot while attacking Anadolu Efes Istanbul for the second spot.
The game was never much of a contest as Bamberg looked windy on offense, only making 39% of its 2FG and 23% on 21 threes while allowing the Italian side 53% on their 2FGs. On the road, Siena went up by 15 at the half and never looked back.
2-year old swingman Alessandro Gentile finally bounced back from two forgettable performances against Zalgiris and Real Madrid, scoring 18 points on 13 shots, dishing out 6 assists, blocking two shots, getting 2 rebounds and a steal. 22-year old Nicolo Melli, who is off to a hot start to the season was solid once again and contributed 11 points and 8 rebounds. For Bamberg, it was an unusual game as the guard heavy play featuring John Goldsberry and Anton Gavel, always good for 4-6 assits per game couldn't get much going and ended up with 10 assists and 10 turnovers in total.
Top Performers:
BAM -  Sharron Ford (9 pts, 12 rebs, 1 asst)
MIL - Alessandro Gentile (18 pts, 6 assts, 3 rebs, 2 blks, 1 stl)

Stelmet Zielona Gora 75 - 78 Galatasaray Liv Hospital
Stelmet and Galatasaray were both at 1-2 coming into tonight's game and while the Turkish club won as expected, the Polish side made sure it was a tough one. In front of 4500 fans, Gora did what it could to stay with Istanbul, not any quarter by more than four points and trailing by nine to start the fourth. A 7-0 run sparked by 4 consecutive free throws and a three pointer Przemyslaw Zamojski was stopped by a Pops Mensah-Bonsu layup. After trading baskets, five consecutive points by Ervin Walker gave the hosts a one point lead with just one minute to go. Istanbul gave the ball into the hands of Carlos Arroyo who converted a shot, but Gora answered with an easy lay-up. A missed shot was Jamont Gordon was yet again rebounded by Mensah-Bonsu who was fouled and converted both free throws in the waning seconds. Craig Brackins got a good shot to retake the lead but his layup rimmed out (followed by a KURVA! from the whole crowed), giving Arroyo the chance to ice the game at the free throw line.
Arroyo didn't shoot the ball very well apart from coming through in crunch time, but he had 6 assists without a turnover.

Panathinaikos Athens 69 - 72 Lokomotiv Kuban Krasnodar
PAOK and Kuban Krasnodar were both at 2-1 coming into the game and looked to remain above .500.
The Greeks couldn't find an offensive flow in the first half, scoring only 12 points in 10 minutes. Richard Hendrix and two three pointers by Sergey Bykov led the Russian team to a 7 point lead after the first quarter and remained decent offensively, scoring 19 points in the second quarter. Panathinaikos however, found its touch too and scored 18 as well but saw its offense crumble in the third again, only scoring 10 points, incresaing its deficit to 12 points with 10 minutes to go.
Nikos Pappas understood that things were urgent and scored two quick buckets to start the fourth quarter, answered by a Simas Jasaitis three. PAOK finally woke up though, scoring on a Diamantidis three and another layup and went on a 10-2 run - eight by Jonas Macilius. Suddenly, with four minutes to play, the lead was down to one point. Mantas Kalnietis and Aleksey Zhukanenko had three plays each for Kuban, but Athens answered again with a Michael Bramos three and four consecutive points by James Gist. The hosts took the lead shortly, a layup by Krunislav Simon and free throws by Jasaitis gave the guests a three point lead. With a few seconds to go, Dimitris Diamantidis took the ball and drained a miracle shot with his foot obviously on the three point line. The refs however gave him three points, tying the game. Kuban didn't waste any time, gave the ball to their lead guard Simon who dribbled the ball into halfcourt, stopped in front of Diamantidis, pulled up and hit for the win.
Diamantidis' miracle shot and Simon's game-winner.
Top Performers:
ATH -  James Gist (18 pts, 3 rebs, 2 stls, 1 blk)
KRA - Derrick Brown (13 pts, 8 rebs, 2 blks, 1 ast, 1 stl)

Euro prospects on the horizon

In the next few weeks, I'll present ~8 92-95-born prospects per position (guards, wings, bigs), starting with fringe candidates whose talent is rather hard to determine as of now and finishing with the sureshots.

The son of a former Swedish pro baller left home at the age of 15 after being picked up by Spanish powerhouse FC Barcelona. Despite being extremely young, Hakanson has been through quite a few tests in his professional life and can't get enough of taking on new challenges to prove emerging doubters who say he's mearly an early bloomer, wrong.

Hakanson has put up dream statlines at European Youth Championships and debuted for the Men's National Team at the EuroBasket as the youngest player of the tournament at the age of 17. 'Ludde' wasn't mearly a spectator but played on average 16 minutes in Sweden's five first round games, showing maturity beyond his years once again and proving that he could compete with A-list players too.

Still, it's far from certain that Hakanson will be a candidate for the NBA in a few years as he critics say that he's been put at the point guard position out of necessity, hasn't shown much progress during his stint with Barcelona, and that he hasn't shown an ability that would set him apart or find him a definite role in the Association which is guard-heavy anyway. We should get an answer on whether Hakanson is actually about to plateau or just didn't have to show his development in limited minutes with Barca's second team last year. The Swede who won't turn 18 before March 2014 has been named starting point guard of Barca's second-tier team and will face serious competition that will try to exploit his inexperience and physical disadvantage. So far, Ludde has had a bumpy start to the season, losing all five gimes and only converting 30% of his two-pointers, as well as turning the ball over at a high rate. But again, he's 17, it's his first pro season and he's playing in Spain's second tier division which is better than many European first tiers.

Ponitka caught the attention of scouts as a reliable volume scorer on Asseco Gdynia's Euroleague squad despite not even being 20 years of age. After playing just 8.6 minutes a game in a dozen of Polish league games in 2011, Ponitka logged 22 minutes in 10 Euroleague games in 2012, averaging 8.8 points, five of them in double figures. Mateusz has shown consistency as a scorer, already having led the World Selection in scoring during the 2011 Nike Hoop Summit against guys like Anthony Davis and Michael Kid-Gillchrist.

After a full season with Asseco, Ponitka joined Belgian Side Oostende as the heir to Olympiacos-bound scorer Matt Lojeski. As for Lojeski, Oostende might be a good omen for the offensive-minded young Pole who is averaging 10.7 points per 22 minutes in the Eurocup so far this season. Even though Ponitka is versatile in getting his shot of, he is a little one-dimensional in general which might complicate his transition to the NBA as wing scorers is not ususally a job description that is searched for in Europe. Still, I definately see some team snatching his rights up as a late second rounder at least. 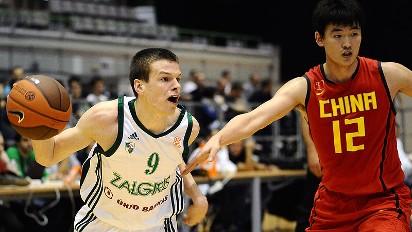 Dimsa is an NBA prospect in the same mold as Golden State Warrior Nemanja Nedovic as he posesses athletic ability you won't find often in European basketball. Despite still being quite raw in using those tools when having the ball in his hands, Dimsa has looked good for Zalgiris 2nd team in the past years, showing a knack for drawing fouls (183 2FGA, 123 FTA last year) as well as good timing for cuts on offense and passing lanes defensively (1.2 SPG). Dimsa was allowed to play only 6 minutes in the 2013 Hoop Summit, but he made sure to score a point for each those minutes drawing 3 fouls and hitting a three pointer.

Dimsa has been called up to play for the Men's team full time this season where he might not see enough time to showcase his progress on a consistant basis., especially not as a ballhandling player with Sarunas Jasikevicius, Justin Dentmon and another young point guard, Vytenis Cizauskas (aka the Deron Williams of Lithuania because he's kind of fat) taking up most minutes. He's still a player to look out for and even though his off-the-bounce creativity coupled with his streaky range shooting is a knock on his game at this stage in his development, his exceptional athleticism should keep him in the NBA discussion to end up a late second rounder similar to Ponitka.

Dallo is yet another intriguing point guard out of France, yet it is quite hard to pin his game down to a set of strengths or weaknesses. Usually, with young Euro prospects, it's always fun to check their performances in youth competitions as they get to play the role they envision for themselves. Yet, neither at the prospect tournaments nor internationally was he able to find a niche. Some of that is due to the fact that he is asked or likes to play the role of a ball-dominant point guard yet without being either having exceptional vision nor the urge to attack and score the ball. Especially the the pro level, Dallo has been extremely tentative to look for his own shots and has deferred alot. His shot ratio has dialed down significantly from his 'centré federale de basketball' (France's central basketball college that Ronny Turiaf as well as basically all the Frnch talent went too). That might be due to his age but it's still weird for a big time talent. Apart from scoring, his per 30 stats have remained consistant going from prep to pro at least.

Even though Boris is still hard to define as a player, his level of athleticism and physical tools (wingspan!!!) is remarkable for a European talent at that age. After not being granted big minutes in Poitiers last season despite the departure of Evan Fournier, Dallo joined Partizan Belgrade, a club that is packed with young talent and two French key players in Leo Westermann and Joffrey Lauvergne. Officially, they're all friends having fun in Serbia and so on, but an eventual battle for minutes between rock solid and undisputed Leo Westermann and the maybe (way) more talented  Dallo should become intresting as both want to reach the NBA. Dallo should see significant minutes with Partizan in domestic competition and spot minutes in the Euroleague. Further down the road, he's got very good chances to be drafted, but his NBA future is still very much open.