The Wolves face a big test on the 2nd night of a back to back as they travel to Houston to take on the Rockets.

Share All sharing options for: Timberwolves at Rockets Game Preview

A well-rested Rockets team awaits the Timberwolves in Houston tonight, as the Wolves will look to win their second in a row after last night's decimation of the Brooklyn Nets.

The Rockets on the road pose a much stiffer challenge, however, as they currently sit at 8-5 and have one of the most potent offenses in the league. That offense features the highest FT/FGA rate and third highest efg% in the NBA, and is led by star off-guard James Harden, who is averaging 24+ points a game, and notably getting to the line nearly nine times per.

Dwight Howard is scoring over 18 per game, shooting 56% from the field, and leading the league in free throw attempts (many of which are intentional), so he isn't exactly on his last legs. Offensively, with the exception of turnovers, where they struggle, they are a stat dream. They lead the league in 3PA and FTA, while they are 28th in 2PA, despite playing at the sixth highest pace in the NBA.

In other words, they are successfully eliminating the mid range jumper from their offense, and its working. 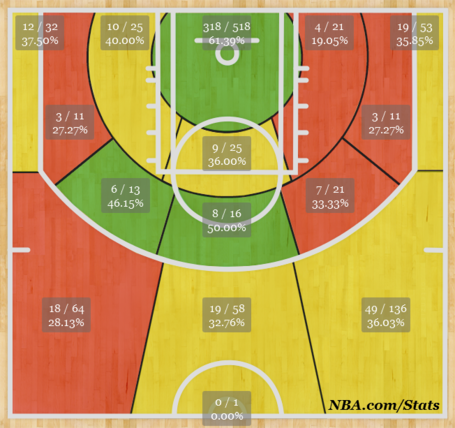 They have taken 72 shots between 16-24 feet.  That is amazing. To compare, the Wolves have taken 202 such shots, and are nowhere near the top of that particular chart.

Seriously, take a look at that shot chart. I'll wait.

It's incredible. I've never seen anything like it. I haven't watched the Rockets this year yet, and while I knew they are a 3s and frees team, I didn't realize how radically they are re-imagining NBA offense. I can't wait to see it.

On the flip side, where the Rockets struggle is on defense. Having concluded that Howard and Omer Asik cannot play together, their best defender is now spending more time on the bench. As a result, the Rockets are giving up a lot of free throws and struggling on the defensive glass.  Their ole perimeter defense is also last in the league in forcing turnovers, and so their opponents, despite not shooting a particularly good percentage, get an above average number of bites at the apple.

We might be looking at a real shootout, with James Harden and Kevin Martin unable to stop each other, and Kevin Love most likely facing up against Terrence Jones, who should have trouble keeping him off the offensive glass. Meanwhile, Nikola Pekovic will have to contend with Dwight Howard on the block in a battle of two seriously powerful and large men.

Hopefully the Wolves have close to a full tank of gas for tonight's game, because if they do, it could be a fun one, with a fast pace and lots of offense.

We'll be back later with a game thread.