Taking a look back at the first three game days of the Turkish Airlines Euroleague. Which teams are hot early on? Which players should be considered MVP candidates? Which youngsters have shown up on the big stage? Who is struggling?

Share All sharing options for: Euroleague in Review: Games 1-3

After beating an NBA team in an exhibition game (go Timberwolves!), CSKA might not have taken French Euroleague debutant JSF Nanterre seriously enough in its opening game. In a small but atmospheric arena in Paris, coach Etore Messina saw his team getting overwhelmed by JSF in the opening quarter. Sparked by Will Daniels who had 11 points in the first quarter alone, JSF took a 20-11 lead.

CSKA point guard Sonny Weems struggled, converting only 3 of his 12 shots. Milos Teodosic only hit 1 of 5 shots and shooter Fridzon got off only one shot in 16 minutes.  It took a strong effort by Sasha Kaun (16 points on 8 shots, 9 rebounds) and Sonny Weems (12 points) to hold CSKA early in the game and take the lead after a run in the third quarter. Yet, Nanterre didn't give up and saw itself behind by three with the last shot of the game. Young Mam Jaiteh took a shot for the tie but missed. Unfortunately for JSF, their biggest off-season acquisition, Sergii Gladyr didn't turn hot, missing 5 three point shots and turning the ball over three times in 22 minutes. CSKA got away with a black eye.

Fenerbahce Ulker Istanbul 75 - 70 FC Barcelona
Fener's coach surprised with his starting lineup by inserting 17 year old point guard Kenan Sipahi. Sipahi responded well in a marquee game by scoring the first three points for Fener and getting a steal. In the end, Sipahi played 11 fun minutes in which he scored 5 points, but his inexperience was visible as he got three fouls quickly in his stints.
Fener didn't play basketball as well as you'd usually need offensively to beat Barcelona, but capitalized on 10 turnovers and an uninspiring impression by point guard Marcelinho Huertas who had 10 assits with no turnovers in the Euroleague opener. Fenerbahce led comfortably most of the game, but a 12-2 run in the last 4 minutes made it a one posession game with just 20 seconds to go before Linasz Kleiza iced the game.

FC Barcelona 67 - 71 JSF Nanterre
Whoops. What a weird group. Two top teams, Barcelona and CSKA have shown very streaky performances in this group which culminated in Barcelona's shocking defeat to JSF Nanterre.... in Barcelona.
Barcelona shot the ball well from the floor (52%) and looked to coast to an easy win after some resistance from Nanterre. Leading by 9 points at the start of the 4th quarter, Barcelona got major contribution by 20 year old shooter Alex Abrines who ended with 15 points on 10 shots.

Nanterre, however, went on a ridicolous 17-6 run in 6 minutes to take the lead. Up by two points in the last minute, Nanterre made the mistake of fouling Victor Sada who tied the game with free throws. Fortunately for Nanterre, Je'Kel Foster had his superhero cape with him and drove against terrible help defense by Barcelona for an easy lay-up with 8 seconds left to get the historical win. A very promising debut for Nanterre so far and fortunately for them, Sergii Gladyr finally showed up too, showing how dangerous this team can get at full strength.

What happens if you turn the ball over 27 times in a basketball game? There's a good chance you're going to lose. What if you're playing Real Madrid with Nikola Mirotic in god-mode? You're going to lose bitterly.

Absolutely nothing went right for Zalgiris which loves to play Real because of the fans negative affliction with Floppy Fernandez. Offensively, Kaunas didn't see any light against Real's defense which ended up with 17 assists and left five players with 3+ turnovers. Defensively, Zalgiris didn't show any quality to stop Real's attacks, resulting with 83 Real poitns on just 32 shots (68 % 2FG!). Mirotic was impressive with 18 points on 5/6 shooting and 5 assissts. As the final slap in the face, Rudy Fernandez had a remarkable performance, seeming to be everywhere on the floor at once.

Real Madrid 98 - 58 Brose Baskets Bamberg
Euroleague is supposed to consist of the cream of the crop of European basketball, but due to different league strenghts, 20-30 point blowouts of course every once in a while. A 40-point blowout with 98 points in 40 minutes is remarkable though, especially since Bambergs really isn't cannon fodder.

However, against the Germans, Real was working like a German engine on offense and defense, pretty much deciding the game in the first quarter where Bamberg only got to score 7 points on 15 shots and commited six turnovers. Nikola Mirotic got to only to play 17 minutes but made these productive ones and become the teams MVP.

Bamberg only had a week to get its head straight and forget the debacle against Real Madrid on the road. Facign Efes Istanbul, another very good team, Bamberg tried to bounce back at home, while the undefeatedTurkish team looked to exploit any doubt and broken confidence Bamberg might have substained after being outclassed.

A mostly close game seemed to take a disappointing turn for Bamberg as Istanbul took a 14 point lead midway through the third quarter. Sparked by two three pointers by Casey Jacobsen, Bamberg embared on an impressive 20-2 run to take a 8 point lead themselves. 8 consecutive points by Efes' Greek Kostas Vasileiadis brought Istanbul back into the game and a two-pointer by Jamon Gordon gave Efes the lead with time for just one posession. The play Bamberg run wasn't pretty as Efes defense was all over Casey Jacobsen's catch-and-shoot three pointer, but Jacobsen was still hot and drained it as if he was still dressed up as Ray Allen for Halloween the night before. It was exactly the type of game Bamberg needed.

Olympiacos opener game against Unicaja Malaga was a bumpy start to its three-peat mission. Bothered by the consequent double teaming on Vassilis Spanoulis, and the strong defense of inside man Fran Vasquez, Olympaicos saw itself behind by seven after the first half. Offensively, Malaga struggled too, however and finished the game with 35% shooting from the floor where they had to rely on Vasquez too, their best and only offensive option that night apart from Zoran Dragic (who still seems to be Wario to Gordan Dragic's Mario) and free throws-drawing Carlos Suarez.

In an ugly yet exciting third quarter, the Greek fans saw a 9-0 run by Piraeus which was answered immediately by Malaga and gave the guests a 10 point lead. Highlighted by two three pointers by Matt Lojeski and Printezis, Piraeus closed the quarter strong and made it a one point game which was extended into a 25-4 run that gave them an ugly win.

After an easy win against Polish Stelmet Zielona Gora, Euroleague debutant saw its first real test in Italian team Montepaschi Siena. Munich did look a little nervous at first, allowing an 8-0 run by Siena, but solidified itself after a 9-0 run. Bayern kept rolling on to a 16 pont lead fter four quarters which was temporarily at danger after a strong showing by Siena in the fourth. Nevertheless, Bayern closed it out in remarkable fashion a week before playing  the hardest game in team history, against Olympiacos.

After two solid showings so far, Bayern did not disappoint and gave Olympiacos a real test. The game started well for Olympiacos, especially star player Spanoulis who had 7 points and a couple assists after the first quarter. The second quarter didn't go much bette rfor Bayern as Matt Lojeski and Evangelos Mantzaris turned hot, trading baskets with Bayern and staying up by 7.

With three minutes to go in the third, Olympiacos was already up by 15, but a crazy 15-0 run by Bayern, sparked by triplets by Heiko Schaffartzik and Delaney tied the game. the game's dramatic late stage saw Munich blow multiple chances to take the lead and Olympiacos shaky free throw shooting eventually was enough to beat the aspiring team from Germany. 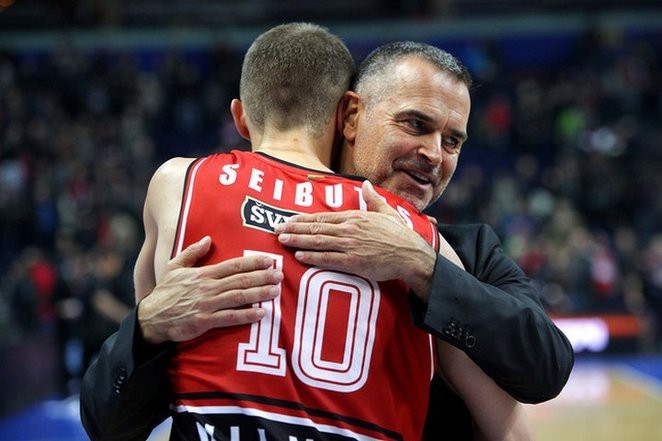 The fans in Vilnius could enjoy the most exciting of the EL so far between two hot teams (62.5% & 63.9% 2PT) which was decided by the very last shot in overtime. Both teams split first quarters even with Athens winning the 3rd by one point and Vilnius the 4th.

With 4 minutes to go in the 4th, Reinaldas Seibutis put Vilnius in front by two. After many misses (among them two free throws by Diamantidis), the lead went up to 4 thanks to split free throws by Seibutis and Juan Palacius. Diamantidis split another pair of free throws to cut the lead to three but bounced back rom his shaky free throw shooting by draining a three that sent the game to overtime. After a dunk by James Gist, Athens looked like the winner, but Seibutis delived again and hit an awkward leaning jumper for the win with 5 seconds to go.

Seibutis for the win!

Poor Belgrade. The team that has looked solid so far just couldn't do anything against a super hot Maccai team that hit 15 of 28 three pointers. Belgrade shot it well itself with 57% of its two pointers converted, most notably Boban Marjanovic who was 9/12 from the field, but it wasn't enough against the range shooting of Joe Ingles, Devin Smith and David Blue who each had 3 converted threes.

Another bitter defeat for the underdog Belgrade. After drowning in Tel Aviv's three point shooing last week, Belgrade looked like the sure winner at home after taking a 48-33 lead after the first half. However, Athens outscored Red Star 41-26 in the second half and survived in overtime. Athens took a three point lead in the last moments of the game, but a three pointer by Blake Shilb sent it to extra minutes. There, a team effort by Athens closed out Belgrade.

Here are some stats for the best players so far:

BEST UNDER-23 CAMPAIGNS AFTER 3 GAMES

Here are some stats for the best young players so far:

A big disappointment so far has been Leo Westermann who is second among all players under the age of 23. In 31 MPG, Leo is averaging just 6 points, 3 assists with 2.7 TO's with 0.90 PPS and an ORTG of 83.

Hello Saric haters and welcome to my favorite part of all this whole column. Throughout the season I will keep an eye on funny-faced Croatian point forward Dario Saric. You bet that by the end of the season, we will all regret Flip not giving him a lottery promise. Fortunately, Saric will play lots of games as he is in the weird Croatian multi-league system as well as participating in the Eurocup.

So what has Dario been up to? Here are his per game stats for domestic league and Eurocup so far:

So far, so good. Especially the international play is encouraging. Let's see what he does the next few weeks.