Two 3-1 teams take to the floor in Minneapolis tonight, where we expect to see a lot of running and gunning. The Wolves look to stay unbeaten at home.

Share All sharing options for: Fast Times at Target Center: A Warriors-Wolves Preview

It's very possible that a track meet will break out at what is supposed to be a basketball game tonight at Target Center. Tonight's game features two of the fastest playing teams in the league, with the Warriors 2nd in pace in the early going, and the Wolves 6th.  Both teams average more than 22 points per game on the fast break, well above the league average of 15.

The Warriors are off to a terrific start, ranking in the top six in both offense and defense, and what jumps out from the stats page is their crazy good shooting: over 50% overall and an incredible 47% from three: 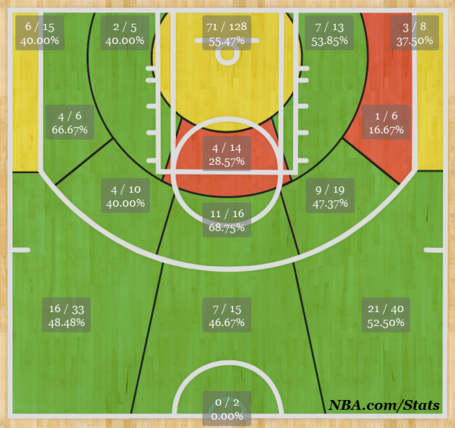 This assault is being led by Steph Curry (18-36 from 3), Klay Thompson (13-25), and even Andre Iguodala (10-20). The entire starting lineup is over 50% from the floor.  While Golden State is flush with good shooters, there will inevitability regress some, we can only hope that starts tonight.

You can see how quickly they push the ball up and look for shots early in the clock in this highlight video from their season opening win over the Lakers:

The Wolves will have to be very focused defensively to keep Golden State from making big runs fueled by threes and their running game. They are going to have to get back and match-up quickly to avoid killer transition threes.

Most of the Warrior offense comes from their perimeter players, as center Andrew Bogut is only averaging four field goal attempts a game.  They rely on a lot of drive and kick plays as well as setting screens for their plentiful shooters. It's going to be a testing night for the Wolves defense.

On the other side of the ball, the Warriors opponents have shot below 40% over their first four games, and under 30% from three point land. Again, hopefully we will see some reversion in these numbers tonight.

There are two trends from Golden State that are promising for the Wolves: first, they have sent their opponents to the free throw line 33 times per game, and of course the Wolves are one of the best teams in the league at drawing fouls. Hopefully this will mean a lot of points from the line tonight.  The Warriors also have been turning the ball over a lot--20 times a game. Again, with luck this will lead to fast break opportunities for the Wolves.

For the Wolves, their offense was slowed down in Cleveland the other night, where, excepting Kevin Martin, they were unable to make any three pointers to supplement their fast break points which got them back into the game. Look for Kevin Love to find his stroke from the perimeter at home; the Wolves will need a big game from their superstar. Also look for the Wolves to make a concerted effort to get Nikola Pekovic the ball in favorable positions. Although Andrew Bogut is a good defensive center, the Wolves will want to put pressure on the interior of the Warriors defense, and if they can get the Warriors into early foul trouble, all the better.

Ricky Rubio is coming off a difficult fourth quarter in New York followed by a difficult game in Cleveland where he struggled mightily shooting the ball and made some oddly poor decisions, then sat for the entire fourth quarter. Hopefully a day off to clear his head will get him back on track.

This is a good early season test for the Wolves, coming off their first loss.  We would like to think that Golden State is one of the teams the Wolves are competing against for a playoff spot and ultimately playoff positioning.  If that's true, the Wolves need to beat them at home.

This should be a fun one.  We'll be back with a game thread later.