The Wolves look to get back within a game of .500 in the Motor City tonight.

Share All sharing options for: Timberwolves at Pistons Game Preview

It feels like the season has ground to a halt over the past week, as the postponement in Mexico City combined with the travel breaks scheduled around that trip means that the Wolves have only played two games in the month of december--losses to the Thunder and Heat, the latter without Kevin Love who hasn't played since December 1st. He's back with the team and will be in the starting lineup tonight.

Things crank up again beginning tonight, as the Wolves will play five games in the next seven days, four of them on the road. After the game in Detroit, they return home to face the 76ers before embarking on a three game road trip to San Antonio, Memphis, and Boston.

Although difficult travel and schedule wise, only the Spurs are above .500 in this stretch, and the Wolves need to win some games to get back to that mark themselves.

It begins tonight with a Pistons team whose standout attribute is their size, as they start a front line of Josh Smith, Greg Monroe, and Andre Drummond.  Not surprisingly, they are the best rebounding team in the league--first in offensive rebounding percentage and fourth in defensive rebounding percentage.  Love and Nikola Pekovic will have a battle on their hands on the glass, especially with Drummond who currently leads the league in OReb%.

If the Wolves can hold their own on the boards, however, they should have a good chance to win, as the Pistons have struggled in other areas, particularly making three pointers (where Josh Smith's ugly heaves aren't helping) and stopping opponents from making shots.

Here's their shot chart for the season: 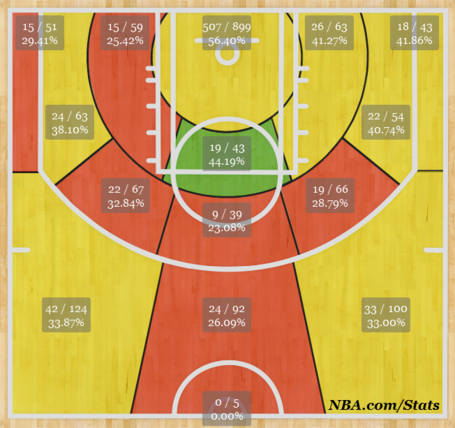 They are league average or below from all but one zone on the floor, and for a team with the size and strength up front that the Pistons have they take a lot of long twos.

Brandon Jennings and Josh Smith in particular have been hurting them, as both players take (and miss) a lot of jump shots. Smith's execrable shooting from beyond the arc is Breweresque.

In fact, the Pistons are statistically somewhat similar to the Wolves, in that they rebound well and usually win the turnover battle, but lose games due to shooting disparity. (The Pistons also get to the line quite a bit, but shoot poorly from their and tend to foul more then the Wolves).

Meanwhile, Canis Hoopus favorite Kentavious Caldwell-Pope has been playing, but not helping that much, as his overall field goal percentage is 37%, and he's under 30% on threes. At least he isn't turning the ball over.

I'm hopeful that Love and especially Pekovic can put the Pistons in some early foul trouble, negating their biggest strength.

The Pistons are no pushover, but this is a winnable game, and the Wolves need to start taking advantage.

It appears like Chauncey Billups will return for this one after missing a dozen games, while Rodney Stuckey might be out with a sore knee.