The Timberwolves and the Four Factors: Can Somebody Make Some Shots?

This season has been a little too much like last season for comfort when we look at it through the lens of the four factors. What's going on?

Share All sharing options for: The Timberwolves and the Four Factors: Can Somebody Make Some Shots? 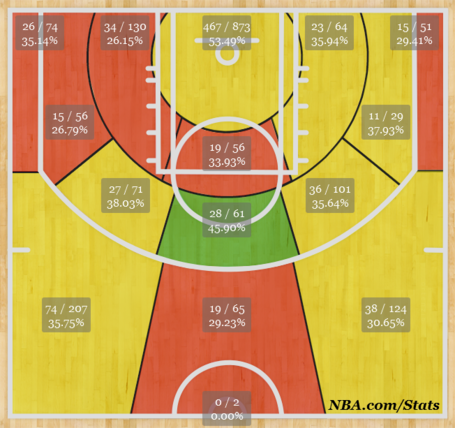 Yellow is roughly league average, green above, and red below.  It isn't particularly pretty. These shot chart areas don't exactly match up to the NBA.com shot distance stats, but the Wolves are worst in the league from 5-9 feet, 4th worst from 10-14 feet, and 4th worst from 15-19 feet.
Rubio is really hurting them, as he's shooting 37% from two point range and is bad from just about everywhere. Kevin Martin is shooting better from 3 then from inside the arc, which also isn't helping.
On the other hand, they have taken the third most shots within 5 feet in the league, and while some of that has to do with pace, it's also true that they have taken a below average number of shots from 5-19 feet, so they are getting shots from good places, they simply haven't been great at converting them. My sense is that this is a personnel problem more then a system problem; the numbers suggest that the Wolves are generating good shots, it's just that the guys they have available aren't very good at making them.
I'm not sure what to make of this. I expect it will get somewhat better, especially around the margins. Derrick Williams was shooting 35% from the field, he's no longer with the team.  Alexey Shved has gone 10-50 this season; he might not be any good, but there's no way he's that bad.  Luc Mbah a Moute has been slumping since his arrival; he's never been a 37% shooter before, he won't end up there.  Chase Budinger is a career .511 efg% player; perhaps he'll help, especially if he takes some minutes from Dante Cunningham, whose 18 footer can look nice, but ultimately doesn't help too much when he shoots 46% without any threes or free throws.
More then the defensive problems (and they remain 8th in the league in defensive rating), it's the continued problems shooting the ball that frustrate.  I'm hopeful that a series of small improvements like those noted above (and it would be nice to see Love tick that 3 point percentage up a bit as well), will combine to improve the overall team efg% from terrible to somewhere closer to average as the season goes on.  That's the one area where I think the team is under performing, and if they want to be a good team this season, it needs to get better.
What have you noticed?