The Wolves look to get back to .500 against the depleted Grizzlies.

Share All sharing options for: Wolves at Grizzlies Game Preview

The Timberwolves travel to Memphis this afternoon to try to end their eleven game losing streak against the Grizzlies. The bad news for Minnesota is that the famed Grit n Grind style gives their offense fits. The good news for the Wolves is that this version of the Grizzlies is toothless defensively. The team, missing the reigning DPOY to injury, is 25th in Defensive Rating according to NBA.com, and gives up points at a league worst rate without Tony Allen on the floor. In important news for tonight's game, Tony Allen has been limited by a hip injury and may play sparingly tonight.

Everything that can go wrong has gone wrong for Memphis this season. Their best player is out until January, one of their wings, Quincy Pondexter, is out for the remainder of the season, and key rotation players Tayshaun Prince, Jerryd Bayless, and Nick Calathes have been below replacement level. The team has also struggled offensively, ranking 21st in the league in both offensive rating and eFG%. 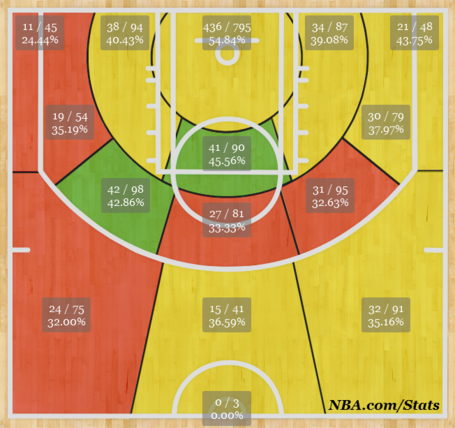 The Grizzlies offense is very reliant on Mike Conley, who is posting a career high in points and shooting percentage. However, Conley is unable to fully compensate for the presence of as many offensive zeros and players who cannot create their own shot as the Grizzlies possess, especially with their injuries.

One developing trend to keep an eye on is what happens when reserve forward Jon Leuer is on the floor. The former Badger is a tall sweet shooting stretch four in the mold of Ryan Anderson, Ersan Ilyasova, and every other tall white guy who can shoot threes. In a very small sample size, the Grizzlies offense has exploded with Leuer on the floor. Unfortunately for the Grizzlies, the defense has been putrid in those moments. The viability of Leuer next to Marc Gasol will be interesting development to track later in the season, especially if the Grizzlies decide to use this year to trade Zach Randolph and rebuild on the fly, a course of action for which they are well positioned.

I thought the Grizzlies would be a Western Conference contender before the season, but the combination of the injuries, ineffectiveness of the bench, and brutal Western Conference has me rethinking that assessment. If the defense recovers to 2013 levels when Gasol returns from injury, the team could still contend. If they are realistically out of the playoff race by the time Gasol returns, a trip to Tanksville could be in the cards. Gasol, Conley, a lottery pick, and cap space is an excellent foundation for a team looking to build a contender on the fly.

In a part of the schedule without many easy wins, this is a critical game for the Wolves. They should beat this iteration of the Grizzlies and beating Memphis would help the team keep pace with Dallas, Phoenix, Denver, and the rest of the scrum for the last few playoff spots. Putting the Grizzlies away early would also help the team rest for tomorrow night's game in Boston, yet another early season contest on the second night of a back to back.