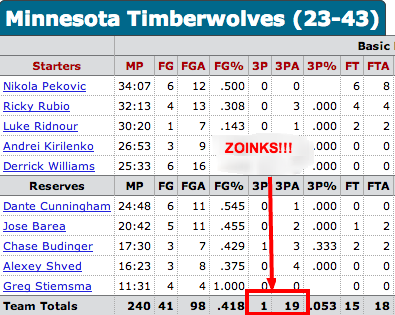 .053 from the great beyond. This puts YOUR Minnesota Timberwolves at .294 for the season from 3 point land, which is a full 21% difference from their opponent average of .364 (the league average is .359). It also places Our Beloved Puppies as the only team in the history of the NBA that shoots less than .300 while taking more than 15 3s a game.

Fittingly, last night's single 3 pointer was made by Chase Budinger, during his first stint back in action since shredding his knee earlier in the season against the Chicago Bulls. The rest of the team put up an o-fer.

The average NBA team makes 7.1 3 pointers a contest. This season, the Minnesota Timberwolves have made fewer than 7 three pointers in 35 of their 66 games (they're also 3 games behind last year's record, but who's counting?). They have 5 or fewer in 24 of those tilts and they have managed 3 or fewer in 7. It doesn't make any sense.

If you want to put this in terms of eFG, the Wolves have a .440 mark from the great beyond. This is the number that should really matter if you want to follow their futility from deep. As historically bas as they are from 3, it should be judged in terms of how bad it is compared to other available options. Are they soooooo phenomenally bad from 3 that they have managed to turn the best shot in all of basketball into a negative? How is this possible with a group of professional basketball players? The Wolves never fail to amaze and entertain....just not in ways that typically involve winning games.

Not only do the Wolves have the league's lowest eFG from 3, they have the 2nd lowest percentage of assisted shots (76.9%), trailing only the Golden State Warriors (71.6%!!!), who actually make a fair clip of their attempts. It would take a stroll through game film and Synergy to figure out exactly what is going on here, but it certainly is something one hopes the team would be looking at trying to figure out what in the hell is going on. Why does a team with one of the most amazing passers in the last 20 years of play have a system where the most effective shot in basketball is not set up more often with an assist? Is this the result of a systematic deficiency or is it just plain weirdness?

Getting back to the eFG bit from the great beyond, keep in mind that the Wolves also sport a (as of March 7th--Hoop Data lags a bit) .379 eFG from 16-23, .417 from 10-15, and .364 from 3-9. They are the 3rd worst team in the league at the rim, trailing only Charlotte and Cleveland with a .604 mark. Were it not for their above average ability to get to the free throw line (7th in the league in FT/FG), we'd be looking at one of the worst offensive teams in the history of the NBA, not just the worst 3 point (and one of the worst in general) shooting teams in league history.

I guess where I'm going with this is that we know the Wolves have access to some fairly specific video/data capture equipment that should help them understand what is going on here on a level much greater than what we can see with Synergy and some free internet box score sites. They should have a pretty good idea if this is systemic. They should have a pretty good feel on whether or not it would be a good idea for certain players to take more (yes, MORE) three pointers in order to get the offense going. After all, it's not like they have a roster riddled with better options. They should also be asking themselves if Rick Adelman is putting his players in the best (relative) position to succeed. This says nothing about his greatness as a coach (he's awesome); rather, more about his current willingness to try new things while drowning midstream.

As for last night's game, let's wrap this up with a few random thoughts:

Well folks, that about does it. St. Paul middle schools are off today and it's time to get ready for a daddy/daughter day of comic book shopping and art museums. I'll schedule an NCAA thread at noon and the game thread will go up at 8:30 tonight.
Until later.