Phoenix decides to sink to the bottom of the Western Conference

Share All sharing options for: Suns Want The Bottom

Minnesota and Phoenix are more connected at the hip than one might initially assume. They are both border states where old people seasonally migrate to and they both have horribly run basketball teams battling for the bottom of their conference.

OK, that's a stretch. Arizona is run by a creepy and insane humanoid gilla monster and you have to show your papers and guns to get anywhere.

Anywho, last night YOUR Minnesota Timberwolves played one of their better games of the season against an awwwwfuuuuuullllll Phoenix Suns squad that looked more interested in heading back to the locker room to watch the NCAA tourney than they were playing professional basketball for millions of dollars.

The Wolves' offense was absolutely humming last night. The ball was moving up and down, side to side, and into the bucket at a surprisingly swift clip. They ended the contest with 28 assists on 42 FGA which is...oh, only good for the 20th highest AST/FG ratio this season. Stupid assists and their not really counting what passing is actually good for.

The eye test was in full effect last night with crisp passing, solid ball movement, and a surgical dissection of what some people will call the Phoenix defense. Over at A Wolf Among Wolves Ben Polk asks the following question:

And here’s the real magic of that synergistic motion and those made shots and the beautiful spacing they engender. Suddenly there was actually room in the lane for the guards to penetrate and create, or for Nikola Pekovic to duck into the lane. Now, again, let’s not get carried away. It helps very much to play a team that cannot guard the ball and who are consistently late in their rotations to the rim.

And it certainly helps to play a team that can be so thoroughly swallowed up by your basic 2-3 zone. An irony of this game was that the Wolves benefitted from the very same qualities in Phoenix that have doomed Minnesota so many times. It’s rare that the Wolves play a team even close to as bad from outside as they are; in the first half, the Suns’ abject inability to hit from outside (they were 1-9 from three and 17-44 overall) allowed the Wolves to swarm the paint, to wall off dribble penetration and force turnovers inside. In the third quarter, the Suns finally began reversing the ball and cutting baseline against the Wolves’ zone and hitting some outside shots. But by then, the game was already out of reach.

So the Suns are terrible and this late-season blowout means very little. Nevertheless, it was hard to banish the sneaking question from my mind: Could it be like this every night?

It is a pretty tempting thing to think about, especially with the return of somebody who can actually shoot the ball Chase Budinger. However, this is, after all, the modern NBA and this just isn't going to cut it: 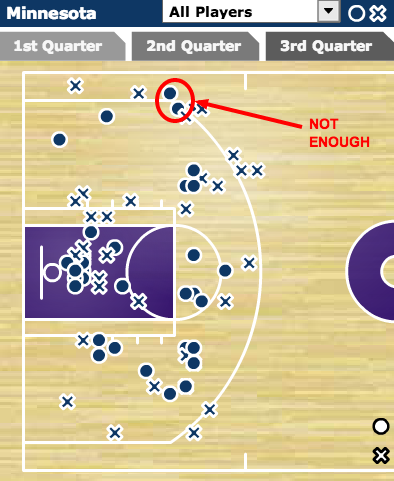 I think I counted up everything from 16-23 and the Wolves ended with a 12-22 mark from the worst spots on the floor you want to shoot from. The league average from that distance is .382. The Wolves shot .545. Maybe they have a special collection of midrange shooters (older Wolves fans should have Flip-induced nightmares about these sorts of shots) that no other team in the NBA has access to. Maybe this high volume of bad shots opens up lanes to the rim that Pek and Love will be able to take advantage of.

Who knows? I'd like to think that the Wolves do, but...

It was a fun game to watch for a while. I just can't wait to get back to the days of entertaining competitive basketball and not the random freak show that provides a cool win every now and then. If they get there with midrange jumpers...well, I'd be cool with that at this point. It's been a decade since they were relevant. They could punt the ball in the hoop for all I care. Just get it done next year.