Share All sharing options for: Wolves beat Pistons with bevy of threes, 105-82

In the words of Mike Breen: BANG.

Your Pups did something rather unprecedented (not really...but really...) tonight. They shot over 50% from 3.

53%!!! As in ten times what they shot just two games ago against the Kings!! 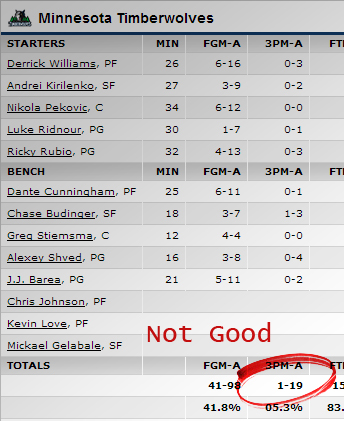 For most of the year (meaning, the part that Chase Budinger has not played in), the Wolves have been perpetually digging themselves into a three point hole, to the point that they have a very real shot at being historically bad. It's been a nightly process that's left us bloggers/fans/masochists feeling very much like Will Ferrell-Trebek around the number three. 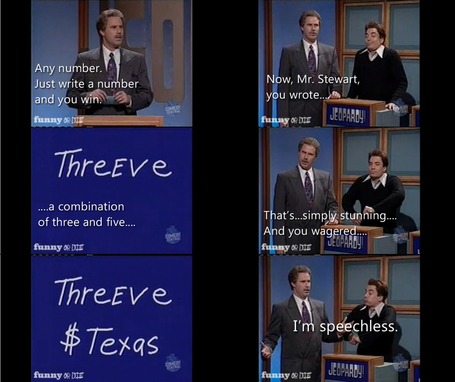 Williams hit two. Luke hit two. Ricky hit two. Budinger and the Russians all got in one, and JJ.....who was in all-out awesome mode tonight, hit five. 14-26 from the great beyond. And to make matters better, the Triplewolves also did a number from point blank range, which has also been not a strength of theirs this year. 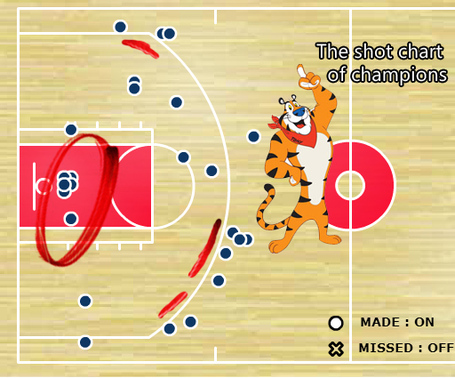 And well....it's been said before, but I'll say it again: it's stunning...simply stunning....that this isn't a nightly thing for this team. Granted, if there's one team that can kind-of-sort-of give the Wolves a run for their money on the don't-play-either-end-of-the-floor-well contest (in which first place wins the worst record in the league....huzzah!!) it is the Pistons. But this team has been absolutely gifted with a passer of unparalleled creativity and skill, and in today's pick-and-roll, handcheck-less NBA, the formula for building a team around such a talent isn't exactly secret: point guard + guys who can shoot + guys who can dunk. The Wolves currently have.....basically neither. Budinger, sometimes Luke, sometimes JJ, and CJ for those 3 or 4 minutes he actually gets to take his warm ups off for. Everyone else is thoroughly pedestrian in those two categories. Having 2-and-4-minutes of players one a team that should have like, 8 of them is....oi.....fix, please.

'Sota is now 5-9 for the month of March, which is not good. But waaaayyyyy better than the 6-22 they went for the two months prior. Granted that's probably going to be 5-12 soon, since we cap off this crazy 7 games in 10 days nonsense with the Lakers, Thunder, and Grizz. But....I dunno....baby steps.

It'll be quite interesting to see how the team fares with it's resident sharpshooter back. A lot goes back and forth about Love and Rubio, but the reality is we were at our best this year without either of them but with Chase. He's an Adelman favorite and (so I hear) the #1 priority this summer, and there was good theory that he was the one making this team tick, when you got down to it.

And rediscovered this timeless gem as well....