Chase and Space (A Min/OKC wrap++)

Share All sharing options for: Chase and Space (A Min/OKC wrap++)

Well, a couple days ago, I predicted us to be 5-11 for March by now because....well, who would have predicted a Love-less Wolves squad would take down Durant and Rocket Westbrook and the Thunder?

On the gratifying scale, tonight ranked about as high as the Howl Meter goes for one particular reason: our dear Spanish Unicorn did a number on Westbrook, who still clearly has a chip on his shoulder over the Thunder wanting to remove him from point guard back in 09. He's gone out of his way to take it to R^2, but tonight, Ricky wasn't having any of it. Rubio matched Westbrook number for number, got him into foul trouble, and defended him about as well as anyone will ever be able to. Number 0 might still have an ax to grind over it...or maybe he doesn't. Tonight, Ricky made it clear he doesn't really give a damn either way.

~Gotta stop takin' these thing so personally Russ. I mean, the Spurs once tried to replace Tony Parker with Jason Kidd, but did TP get all uppity? Hell no. He went and married Eva Longoria then won two more championships. Learn from him, dude.~

So we have now actually tied the season series with the Thunder, which....well, ironically, is probably what the Pups were expecting back before torn ligaments and knuckle pushups, but not what the Thunder were expecting in any case. In a season so unscripted it might as well be the MTV Music Awards (Yo Crunch, Im'a real happy for ya...) this is as bizarre as anything. I mean, how do you go 2-2 against Oklahoma, but 0-2 against Charlotte...??? As the title implies, I want to take a moment and look at this theoretical 'Chase Budinger Effect'. The team both shoots better (47% with, 43% without) and wins...better?....(6-5 with, 20-40 without) when he plays. It could be a coincidence. Or it could not. I'm leaning towards not.

Beyond the obvious....he's a good three point shooter and above-average athlete on a team fairly devoid of both....I think the core of what propels this team with Chase aboard is the system Adelman likes to run, which is both very flexible and not nearly as flexible as you'd think.

When you break it down, the foundation of Adelman's system is basically places on the floor that get left open (usually just to the left or right of the free throw line and right under the hoop) and players that know when and how to occupy them. Examples:

All three of those videos have at least 15 possessions of Adelman ball, and yet you can count on one hand the number of times you see an Adelman player set up shop within 10 feet of the hoop in any one of them. More often than not, all 5 Adelman-ers are above the key, and the action happens when guys make cuts to the hoop off down screens or float out to the Great Beyond. Budinger himself, in fact, won the Pacers game for us on just such a play.

That's because Adelman's system is designed to not move the ball towards the hoop, but rather move the players towards the hoop, then let the ball catch up. And he knows that his guys won't make cuts into spaces that are already occupied, even if the occupant is a teammate.

This is not to say that he won't adjust that....he did it with Yao in Houston and has done it here with Pekovic....but it does mean that, ideally, he'd just as soon not have to. I believe this is what lead him to stick with Vlade Divac in Sacramento and what is propelling the Gasol pursuit here (it's not just Kahn. Adelman wants Pau too) And made the Kings such a force when Chris Webber was healthy, and what kept them in the hunt when he was not. RA wants big guys who can be major contributors and distributors for him without being tied to the post. Even though healthy Webber was their best player, Peja was their most important one. CWebb was an unreal power player in his prime, but what made him work in Sacramento was his ability to pass like a point guard (arguably the best passing post player ever, in my opinion) It was Peja was the guy who capitalized on Open Adelman Spaces, shook up the defense, balanced the floor for everyone else, and ultimately made the system work.

RA was also able to get the same thing out of Martin (more or less) after Martin launched his career with the Kings post-Adelman, then got brought in to Houston. Much like Peja, Martin is a master and mixing up finding open spaces and making cuts to the hoop (and getting absurd numbers of free throw attempts in the process....10.3/game in 2008!!!) And of course, Adelman also knows how to shut him down as well....KMart went just 1-9 tonight, took just two free throw attempts, and all his shots came in contested spaces 12 feet from the hoop or further out. 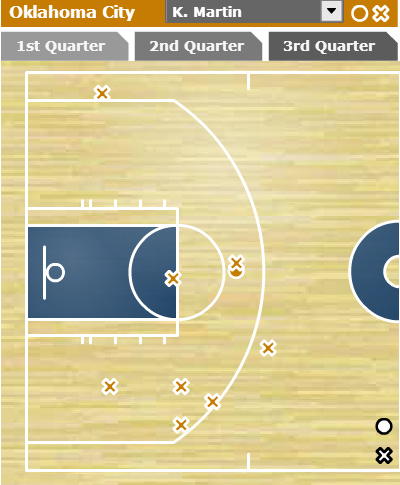 Now I'm in no way arguing that Chase is Kevin Martin, and certainly not that he's Peja. Not even close. Stojakovic was a legit MVP candidate in the wake of Webber going knee-less, and that's a level Budinger is pretty unlikely to ever reach.

But I do think that the 'Chase Effect', or what have you, is real. That Budinger's presence on the floor, even if he doesn't have the ball....maybe especially if he doesn't have it....fundamentally alters the look the Wolves throw at the bad guys and makes them all more effective within the offensive system Adelman runs. By being in different places on the floor, the defense then also adjusts to be in different places.

It's just theory, mind you, but worth examining. I'll reiterate that I've been led to believe that Budinger is this team's top offseason priority, which leads to an interesting debate. There are no shortage of players who can produce what Chase produces, no question. But how many can produce in the way he produces, because it's looking increasingly like the means are just as important as the ends here. Maybe more so.

Adelman tried replicating all this last year with Webster and Ellington (and to a lesser extent, Beasley and Williams) and seemed obviously less than impressed with the result. In retrospect, this is also probably part of why he kept playing Wes Johnson and Malcolm Lee....they at least got to the right spaces at the right time, even if they couldn't do much with it. Clearly not just any solidly productive athlete/shooter can fill this roll, which raises the question of how much Chase is really worth to this squad.

Something to think about.

**There is a certain hierarchy to basketball/basketball smarts.

Top tier are the guys who are both super smart and super athletic. There are the LeBrons/Durants/Kobes of the world. There are also guys who are so smart that athleticism doesn't really matter. Timmy D. Love. Chris Paul Pierce.

Then guys who have the BBIQ of a folding chair and make it on pure athleticism. Then actual folding chairs....inanimate objects. Useful for sitting, sometimes placed on the court as beach obstacles for practicing purposes.

Then right below that, there's Gerald Green. (and JR Smith and JaVale McGee)