The Wolves get as far as halftime before being drug down into the Mississippi mud. 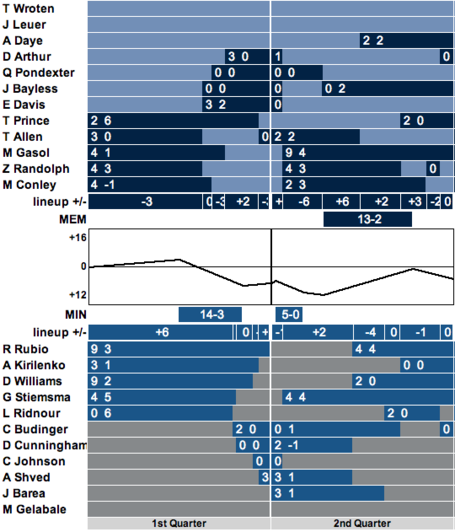 The Wolves were able to push the ball early with their starting lineup, scoring 30 points in the 1st quarter with Ricky Rubio causing all sorts of havoc and Derrick Williams making all sorts of shots.

The second the starters began coming out of the game, Lionel Hollins' eyes grew bigger, Marc Gasol's picks got stronger, and the whole damn thing got dragged down into the Memphis Muck style of play that we've come to know and love over the past few years.

Memphis is really an interesting squad. No team in the league cares less about the 3 ball. No team cares less about pushing the pace. And very few rely more on their starting five. However, last night, the Griz were able to rope-a-dope on the pace of play in the first quarter before making 6-10 from 3 and watching their bench destroy (no: DESTROY) the Wolves' reserves.

The Wolves scored 50 points in the first half and there were points in the 4th quarter where I didn't think they had a chance at 80. It was classic Griz ball and there really wasn't a whole lot that the Wolves could do about it, especially without Nikola Pekovic in the lineup to deal with the Gasol Monster.

THE GAME IN HAIKU:

Wolves bench threw up on themselves

If you are looking for a really great pre-game meal, try out Potter's Pastie's food truck. Last night they were at Harriet Brewing and I tried the Thai Veg. It was fantastic. They are about to open a storefront location on Como Avenue in Minneapolis. Follow them on Twitter and Facebook.