The ride is finally over (a Min/SAS wrap)

Someone stop the season, I want to get off now....

Share All sharing options for: The ride is finally over (a Min/SAS wrap)

Why? Because if it's not, the little cars won't actually making it over the second one. I would know. I tried it on Roller Coaster Tycoon. 16 people drowned and my park was shut down after 3 hours.

Stupid physics. Always getting in the way.

And so here we are, after 82 games on the Timbercoaster. And oh man, was that first hill ever the biggest. and it just kept going down. And down, and down and down and down. No Rubio, down to no Love, down to no Budinger, down to no Roy, down past no Josh Howard and no Malcolm Lee all the way to the sub-sub-sub basement of no Love all over again. With the clickity-clack of intermittent injuries to Pek, Barea, Kirilenko, and Shved along the way.

Oi. That's the kind of season only grumpy cat could love. 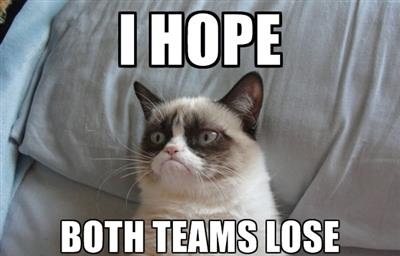 Ricky Rubio has blasted apart any doubts he's not a premier player. Derrick Williams was able to improve his game to an acceptable level. Chris Johnson provided some much-needed highlights when the team was at its absolute lowest rung. Adelman got win #1,000. And....that's it....?

This season was supposed to be 'the year'....you know, where all the waiting and drinking and blueprints finally came together into a storm of playoff awesomeness where the fans cared and Papa Glen could sell high. Instead, the Pups head into the (theoretical....) summer with a league-leading 9-season playoff drought, a star who just had surgery, a brand no one is eager to buy, and tremendous pressure decisions about very key parts. How much is Pekovic worth? How much is Budinger worth. What's going on with Roy? Will Kirilenko return? Will Kahn return? Will Adelman return? It's not a popular line, but yes, the Wolves could start the 13-14 season with just Rubio and Love being coached by who knows who, in which case, this year was completely wasted, and 'the year' will never actually arrive.

Tonight's game was surprisingly semi-competitive, considering neither team had anything to actually play for. The Spurs came in locked into the #2 seed, the Wolves locked into no seed at all. But they both competed (mostly...), which I'm sure does Adelman's heart good after blasting the team last year for starting summer early. Kirilenko showed why we're all hoping he opts-in, Rubio hit his threes, CJ finally got free, and Williams 360'd...

But no TMac. One tear.

There's so much to think about now I don't even know where to start. Owners, coaches, free agency, draft...the simple fact it's 'that time' to be thinking about any of it is....agh....hit. head. keyboard. The year. Etc.

Plenty of end-of-season stuff coming your way soon. But for now, I'm just going back to watching this:

Not in the face. Oi.