Hippity hop all the way to the birdie boiler (and Pekovic too?)

Share All sharing options for: Even more thoughts on Flip Saunders returning

Well. Here we are. Those in the know say The Curmudeon's scoop is in the cone (read: Saunders is destined to be your new POBO/GM/Important-Boss-Guy), which means David Kahn is about to be replaced by the guy who was fired by the guy he replaced. Welcome to Timberdale Community College, where up is down and snow happens in April and Scary Movie 5 actually exists. Because of reasons. Owned and operated by one Professor Ian Duncan. 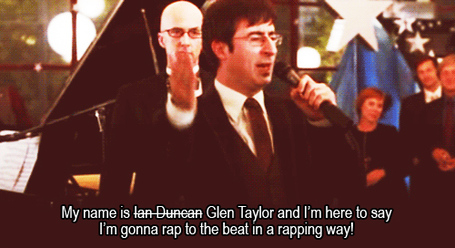 Nothing is confirmed. Or denied. But there's no real reason to think this is not going to happen, as it's been theorized/reported by two pretty qualified sources. Sid, for all his Sid-ness, hears pretty much everything. And Aschburner hears just as much, if not more (for you newer tykes, Asch was the Wolves' beat writer for the STrib during the KG era. He knows all)

Originally I proposed that hiring Flip (would) raise(d) two immediate questions: what happens with the draft, and what happens with Adelman? Let's take this blog-o-space to dig into that, plus ask a few more...like what does this mean for Pekovic/Kirilenko/Budinger, who could a new coach be, and do we have a new owner?

S-n-P pretty much laid out all there is to say about Flip as a possible executive/talent evaluator, with maybe one comment to add: he gets maybe a harsher rap for the mid-range stuff that he deserves.

I think on one hand, he did run a system that prioritized jumpers from no man's land. Personally, I've always felt he simply felt that the best shot was an uncontested one, and that 15-22 foot range is not a landscape defenses often roam. It works when you have those guys (like when we had Cassell) but how many of them are there? Steph Curry....Durant....Chris Paul....that's about it?

(FWIW I'm always amazed at how everyone cites Curry shooting 45% from three along side his 'most made threes ins a season' thing. Well...yeah. He kind of would have to. If he shot say, a middling 35%, he'd have to attempt 10 threes/game to reach 270)

On the other hand, who was going to get to the line for him? KG, for all his awesomeness, was not a collision player. Ditto Terrell Brandon. Rasheed Wallace was a three-point camper by his Detroit days, Rip's whole existence is for the 15-footer, and Ben Wallace was a guy you actively did not want taking free throws in the first place. And the Wizards? Forget the free throw line...anytime you build a team around the Nick Young/Andray Blatche/JaVale McGee trio, you're going to lose.

When he got guys who could get to the line....Chauncey Billups, Sam, Spree (relative for his age at least...).....they got to the line.

ALSO. In terms of Flip the office dweller, we do not know for certain that he would even pick a coach to run that system in the first place.

Although he may be picking a new one...

Just 48 hours before this all happened, it appeared Adelman had free reign with the team. He could be the coach, he could be the GM, he could be the Prez, whatever. Now it looks like GM is off the table. In the words of Stuart Scott: Wha ha happen...?

Glen pretty much made a commitment to get a definitive answer on Rick's future before making any other moves. Therefore, the fact a move has been made can mean only one of a couple things:

1. The sale of the team took a turn for the....something....and GT decided he had to move on that now.

(or possibly both, I guess)

It sounds like Taylor and Adelman met in Portland last Wednesday. Did RA give his answer then? One would think that if he had...regardless of what it was...someone would say what it was. No one really gains anything by keeping quiet. If he's staying, he's staying. If he's not, he's not.

Yet the fact this went down like, 24 hours after that reported meeting seems too coincidental to be actual coincidence. The knee-jerk reaction would seem to be Adelman did give his decision, and it was no. Thus Taylor would move as fast as possible to get the replacement setup all going before it's too late to search for a coach and manage the draft stuff.

But....if Adelman's not coming back....why not just say that? What real harm would there be to saying "Rick has decided to stay home and take care of his wife and look for his next path in the future. We appreciate all the hard work he's blah blah blah..."

That said, if a new coach is required, I'd say it's a short list:

Those are my picks, in that order. Three guys who've shown they can run simple and effective pick-and-roll systems that elevate the play of really good point guards (or in SVG's case, a maybe not-so-good one). Van Gundy gets the edge in my mind because he's also shown he can craft a competent defense out of less-than-competent defensive players. But yeah. There ya' go.

Yes, Saunders is part of an investment group that has (is?) trying to by the Timberwolves. Initially it appeared they were not in the running. But obviously Taylor's original sale plans are not working out (we were supposed to meet the new guy last November....) Could Saunders' installment indicate that group has succeeded in buying the team?

Hard to say. There's good reason to think so...but good reason not to as well. Mostly, if this was true, you'd think we'd be hearing about it. And why would Glen be the one to name Saunders to the position if Saunders is going to own the team and could just name himself after the fact? A lot hinges on the real answer to all this.

I've gone on record as stating I believe Pekovic will be leaving this summer. If Glen is not selling the team, I still believe this to be true, and I suppose I should detail why:

The two teams I expect to come calling right away are Portland and Dallas.

The Mavs have an unhappy, aging superstar, a glaring need at center, and tons of money to burn. Mark Cuban's dream of a 3D team (Dirk, Dwight, Deron) is dead (ahaha alliterative) and he's publicly owned up to that.

(FWIW Mark, it was still worth trying for)

Cuban, for all his antics, is a very very very smart basketball owner guy. He knows what his team needs, he knows where he can get it from, and he's willing to pay for it. So...yeah....

And then there's Portland, who, among the sidebars of also having a need at center and money to burn, also has an owner who pretty much outright hates us. Because of Kahn. And Adelman. And Pritchard and Penn. And that time we tried to bilk them over Martell Webster. And the time we made him pay out a fortune to a guy who told him he was done playing basketball (ok, technically not our fault, but Allen doesn't get caught up in those details). Plus there was this whole thing

My name is Neil Olshey, and I am a mouthpiece for the establishment.

Also possible? Phoenix will have money, Atlanta is letting JSmoove walk and wants Al Horford at the 4, Philly might decide not to resign Bynum, Detroit's sick of losing, Charlotte's sick of losing, KG and PP could retire, who knows what the hell goes through Jim Dolan's head at any given moment....it could be anything. But it will be something. That 4 year/$14.5mil offer is coming.

As for Kirilenko and Budinger, I'd say it hinges on whether Adelman is staying or not. AK came here for a couple reasons: money and the system. He can still cash in on his player option, but he might decide a Rick-less Wolves team is not going to compete enough to be worth his services. One can only hope this doesn't end up being the case.

And Budinger, well...he's an Adelman guy. He's a priority so long as Adelman is calling the shots. If he's not, then who knows? Not me....

Basically the whole thing lines up to this: is Adelman coming back or not? The fact we're hearing all about Flip but nothing about Rick is....puzzling, to say the least. Even in regards to Flip being super talkative and Rick being super private. Again, there's no sense in not announcing a decision.

Should Flip take over and Adelman stay in PDX, then...well, it's lateral movement at best. If Flip and Adelman are both in, then awesome, but I don't see how that would work out. Both are strong personalities. Both want the corner on roster control (Saunders learned that lesson in DC). It can't work.

If Saunders is in....regardless of Adelman's choice....then I'd expect a formal announcement this week. We'll see what happens.