This is the first installment of my 2013 draft projections. For an explanation of the models involved, I refer you to Monday's post. I recommend you at least scan that article to help interpret the numbers. One additional feature in these write-ups will be the results of a player comparison model. This is a simple metric that compares the average absolute variance across box score statistics, height and weight, age, and team situation (SOS and SRS). I average the weight of the different inputs such that it ultimately becomes "scoring + passing + defense + rebounding + size + age + team situation". The player comparisons listed are those who have the smallest average difference across these categories.

To help put scores into context, here is a key with how many "peak wins" college players selected in each draft slot have brought across the past 30 years:

The league has become saturated with great young point-guards in the past few years. Irving, Rose, Wall, Lawson, Rubio, Curry, Westbrook, Lillard… Most teams either have a young star running point, or at least are hoping for one to develop. After looking at the numbers for the 2013 class, I expect this trend to continue. There is not a sure-fire superstar in the group, but I wager the NBA adds at least two future starters. This is good news for the few remaining teams who haven’t found their point-guard of the future. Given that two of the candidates are likely to slip well past the lottery, it is also good news for teams looking to get value in the back-end of the first.

Point-guard may be the easiest position to predict from college to pro, especially at the top. There just do not seem to be many players my model pegs as great prospects who fail to contribute at the next level. To demonstrate this, here are the top 30 prospects in the past 30 years: 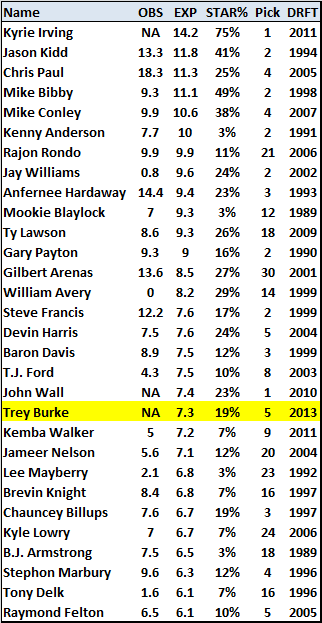 William Avery, Lee Mayberry, and Tony Delk are the only players on that list who failed to become a important NBA players (for basketball reasons). Trey Burke’s presence on this list should inspire confidence in whatever team has the opportunity to draft him.

That said… I have more reservations with Burke than I would with most players who score this highly in my models. He has a bad defensive reputation, something that is difficult to capture in the box score, is a bit too dependent on pull-up jumpers, and is smallish even for a point.

Even with that bit of negativity, Burke is clearly my favorite point guard prospect in this draft and I expect him to become a good and possibly even great NBA player. He has the quick first step and handles that, in combination with modern NBA rules, makes elite guards nearly unstoppable. He has a really nice mid-range game. He led a young team through the college tourney. He is a good prospect.

These two prospects are easier to discuss in tandem. Both have a solid NBA point-guard frame and were adept at both stretching the floor and using their dribble to earn trips to the rim and charity stripe throughout their college careers. Wolters is the better distributor and McCollum is the better rebounder, but otherwise their statistical profiles are strikingly similar. These prospects also share in their biggest red flag, dominating at small schools against relatively weak competition. The SOS and SRS ratings of Lehigh and South Dakota State have been roughly equivalent across the past four seasons, with a nod going to Wolters for playing in a slightly more competitive environment.

In spite of these obvious similarities, McCollum is currently projected to go in the top-10 of the draft, while Wolters will probably be available at the beginning of the second round. I think we can trace this discrepancy back to Lehigh’s victory over Duke in the 2012 tournament. McCollum hung 30 points on America’s least-favorite team in front of a national audience. That kind of thing sticks in the minds of sports media and NBA scouts but it really should have no bearing on draft discussions when there are another 78 games to look at.

Wolters had a similar opportunity to market himself this season against Michigan but it didn’t work out nearly as well. Wolters was held to 10, 6, and 5 on 21% shooting effectively ruining his "one shining moment" (important note: Wolters held Trey Burke to an even worse line of 6, 7, 0 on 17% shooting in that same game). This dud performance would be more concerning if it were Wolters’ only game against tougher competition. As a 19 year old, Wolters posted a 34, 7, and 5 line in a win over a Washington team led by two future first-round guards (Wrotten and Ross). Unfortunately for him, that game was during the regular season so nobody cares. He also posted another 30 point performance against a solid Alabama squad and saw no obvious production drop-off in several other games against major conference competition. There is at least as much evidence that Wolters can hang with the big boys as there is for McCollum.

This comparison shouldn’t be viewed as a slight to McCollum. C.J. looks like a really nice prospect and I think general consensus has him about where he belongs. My complaint is with the under-appreciation of Wolters. These are two great small-school prospects who should be taken in the lottery. I have trouble putting one above the other, but I would probably have to go with Wolters just because his passing gives him a clearly defined position.

Carter-Williams’ career at Syracuse has shown him to be an excellent passer, top-tier ball-thief, and atrocious shooter who’s best scoring option is getting fouled. I really like the Nate McMillan comparison above, however my favorite optimistic comp is probably Ricky Rubio. Very similar physical profiles, strengths, weaknesses, and approaches to the game. I should note that both Rubio and McMillan probably have/had a more positive impact on their team than is captured in their Win Shares. The dish’n’defend game seems to look better in on/off and play-by-play measures than box-scores can capture. If this is true, MCW’s prospects may be a bit more optimistic than the above predictions.

Larken is listed at 5’11" and that measure may be a bit optimistic. This may really limit his potential defensively and as a consequence his ability to ever hold a starting role. One thing I noticed poking around with counterpart and Synergy data is that shooters tend to improve dramatically when they are matched up against shorter players (I doubt anyone is surprised by this). However, this is not necessarily a deal-breaker for point-guards because the effect is much stronger when the opposing shooter is playing off-ball. Stunted players need to occupy a very small halo in order to keep spot-up shooters honest, but thanks to their advantage in quickness they can stay inside a ball-handler and keep him from pulling up. We see Barea do this incessantly to great effect. Ultimately I do think that Larkin’s size is a problem, but I caution against over-emphasizing it.

Larken’s game is pretty easily recognizable. He is an athletic pocket-sized point who likes to bomb threes. We have seen it work a few times recently, and Larkin’s collegiate production compares pretty favorably to those cases:

Looking across those numbers it seems like Larken has a solid chance to become at least a useful spark-plug off the bench. Good value for a player almost certainly available deep into the 1st round.

One player with legitimate star potential, three additional players who I can see becoming NBA starters, and a fifth who should at least get some burn as a role player. This is a strong group with possibly the best value pick in the draft (Wolters). Teams in need of a starting or backup point should have an opportunity to fill the slot.

Next up is shooting guards...