Saunders has quickly made his mark as the new POBO of the Timberwolves. Per Jerry Zgoda, he has dismissed all Wolves scouts whos contracts expired this year (Pete Philo, JT Prada, Curtis Crawford, Steve Gordon and Will Conroy) Yes, that's Will Conroy the player and Brandon Roy's buddy, who was made a special assignment scout after being waived from the roster at the beginning of the year.

The Wolves will retain Milt Barnes and Derek Pierce....for now. But I'd say it's pretty clear they're getting thrown out of the mansion one way or another.

Not clear what Saunders' end-game is here. This move is very similar to the one Memphis made a few years ago, when they fired their entire scouting staff and basically never replaced them...a move that the jury is still out on (the last remaining 'scouts' left last December when the team hired John Hollinger) The Grizzlies are obviously a vastly improved team compared to three years ago, but they've done it not really based on anything scouts (or a lack thereof...) would positively affect: bringing in Zach Randolph, signing Rudy Gay to a max deal, and getting the normal, expected improvements out of Marc Gasol.

Since hiring Hollinger, however, the Grizzlies have made a spectacular deal, cutting bait on Gay while bringing in veteran Tayshaun Prince and a guy who may be pound-for-dollar the best value player in the league, Ed Davis. 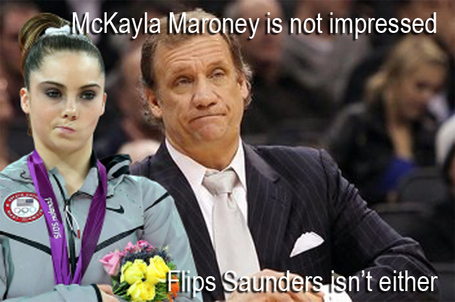 If this is the beginnings of the Wolves setting up a legit analytics department, then awesome. Zgoda notes that Saunders has been talking with Adelman almost constantly since moving in. They both have kids with front office experience and a history with collecting numbers (not sure if it's a big deal if they know what to make of them or not, since that's likely going to be Flip and Rick's job) RJ also has worked both with and as an NBA scout himself. And certainly, as Sloan or ESPN or even our humble network of SBN blogs proves, there's plenty of smart analytics guys out there for hire, if you know where to look.

(FWIW I checked with Wolfson, and no one has confirmed from Adelman himself that he's coming back, but there's no reason to think he's not given what we know)

The one loss that might smart a bit is Philo, who has been the Wolves' lead international scout. Yes, there was the Tanguy Ngombo mess (probably as much on Tony Ronzone as Pete), but Philo was also instrumental in scouting Rubio, bringing in Shved, and grabbing second rounders that we haven't heard much of lately but still (I believe) have solid NBA potential: Nmanja Bjelica and Paulo Prestes.

This year's draft has a few international guys the Wolves will want to take a good look at. Rudy Gobert could be a great third big man for the rotation as someone with the height, reach, and instincts to make a defensive impact. Sergey Karasev would be an almost perfect off-the-ball, catch-and-shoot fit at the 3 in Adelman's system, and Dario Saric has world's of long term potential. So it would be great to...k'now....have someone to do that.

Hopefully the new setup gets put into place quickly. Pre-draft stuff starts in less than a week now.