vjl110 wraps up his 2013 draft coverage by giving us his top 14 overall and his top players at each position, with commentary on some of the lesser known prospects.

The draft is approaching and I wanted to put together a final "Big Board" of sorts. I list the top-14 prospects ranked by expected wins during their peak season. Then below I rank the players at each position to help assess who is available to satisfy "need" and identify situations where it may be wise to wait on a similar player who will be available much later in the draft. Finally I list my preferred targets at each of the Wolves' four picks in the draft.

If you want to see the complete data including all of the players in this draft as well as past drafts, just have a look at my google document. Comparing ratings of the below players to some of your favorite prospects of the past may help add some context:

(Note: These are 2013 specific tiers. On a historical scale, there are no tier-1 players in this class) 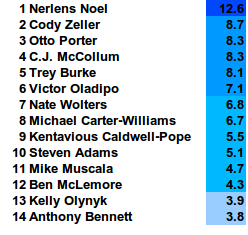 If you are a regular at Hoopus you know my arguments for these guys. If not, I refer you to my "mock draft" post which addresses all of these players and a couple others who don't make the cut (Len and Shabazz)

Below are positional rankings as well as a brief description and the closest statistical comparisons of the under-the-radar players who make at least the "tier 5" cut, and video clips of those who make at least the "tier 4" cut... when available (sorry Taylor Smith). Nothing too thorough, but enough information to impress (annoy) folks at the bar, and maybe keep you interested in the draft a bit longer than you otherwise would be.

I don't have a rigorous approach to assessing the Euros, but I will interject some brief comments and poorly researched opinions where applicable. I would really appreciate if others, especially those who actually spend time following European basketball, can add insight in the comments. 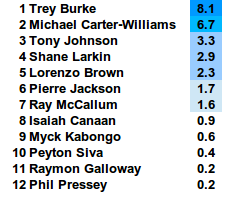 EURO note: Schroeder should probably go after Michael Carter-Williams and before any of the tier 4 prospects. It sounds like he hasn't impressed in workouts... noteworthy because you rarely hear anything but platitudes coming out of those things. Still, he has the physical tools and scouts seem pretty high on his court-vision and scoring ability.

Tony Johnson: Shot 45% on ~ 77 attempts over the past two years, excellent ball-thief throughout 5-year career, uses great ball-handling and tempo change to create easy buckets for himself and others.

Lorenzo Brown: Big point guard with nice passing and stealing skills. Think MCW but slightly worse at everything. He interestingly draws two of the Barry brothers in his closest three statistical comparisons.

Pierre Jackson: Great pint-sized offensive player. Very efficient in college where he was excellent at getting to the line and setting up teammates:

Nate Wolters: I have said plenty about Wolters in the past, so I will let a video of him destroying two pro guards do all of the talking here.

Erick Green: Offers a very similar package to McCollum, but not as good, especially in terms of steals.

B.J. Young: Made 46 of 115 threes (40%) converted 10 points per 40 inside and on free throws and recorded decent passing and stealing numbers as a freshman. Came back as a sophomore and largely disappointed. 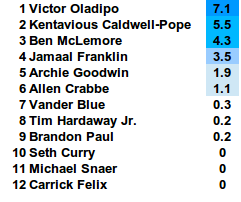 EURO note: Not actually a European prospect, but Ricky Ledo is another guy who did not play NCAA ball and is thus left off the list. The only stat I have to go on is his high school ranking. Ledo rated as the 11th best prospect in the 2012 class. Looking at past 11th ranked high schoolers we have three lotto picks (11, 12, and 14), three second rounders (31, 32, and 49) and six undrafted players. The story is similar looking at surrounding rankings as well (9th, 10th, 12th, 13th). Based on only this information a 1st round selection seems risky. I would take him after all of the tiered players are off the board.

Archie Goodwin: Project. Terrible shooting and general efficiency/competence on the court as a freshman. Still... 18 years old and one of the best in college at getting to the rim.

Allen Crabbe: No-conscience chucker with good size and athleticism for an NBA shooting-guard. Apparently he has some red flags pertaining to defense and mental approach. 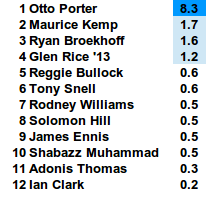 EURO note: I would target Giannis Alphabethands and Sergei Karasev way after Otto Porter but before any of the other prospects. Karasev's rep looks accurate, both the good and the bad. I believe the shooting and court-vision, but his steal rate is that of an over-matched defender. Here are Alphabethands' per 40 numbers in the Greek A2 league:

I don't really know how that level of competition compares to division 1 college, but those numbers would be goodish assuming equivalence.

Maurice Kemp: Has the nice complete game you want out of a small forward with one key omission. He has no range. He is too skinny to move to power-forward and without serious work on his shot I don't see how he can get time at the modern NBA three-spot.

Ryan Broekhoff: Made 252 of his 619 college three-point attempts (40%) and passes the ball nicely for a wing. Rebounds well enough that he might be able to compete as an NBA small forward even with marginal size.

Glen Rice Jr.: The rating above is based on his final year of college production. I don't really know how to interpret D-League numbers, but adjust accordingly based on what he did there. Looks like a fine prospect as long as you don't pretend he is anything like his dad. 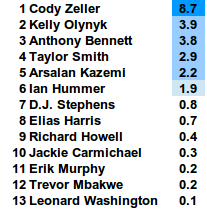 Taylor Smith: Undersized (6'6") power forward with big-man defensive numbers (12.4 rebs and 3.2 blks per 40), who also wrecked the Southland conference with his inside scoring putting up 20 points per 40 on a 65 TS% across the past two seasons.

Arsalan Kazemi: Successfully transitioned from offensive focal-point at Rice to more of a specialist role at Oregon. Excellent athlete who I think can come off the bench to destroy opposing stretch fours in the NBA.

Ian Hummer: Ivy League power-forward with a better assist rate than most point-guards (5.3 per 40). I'm not sure what his NBA role is, but I would like to see some team give him a shot. 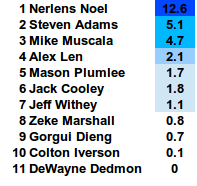 EURO note: Rudy Gobert can almost dunk from the free throw line without his feet leaving the ground (that may have been hyperbole, but his arms are really really long). That is a tremendous asset in basketball and he gets consideration if only for that. His French League block rate and scoring efficiency are interesting enough to make him a legitimate gamble between tiers 4 and 5. Eyeballing the numbers, Noguiera looks very similar to Gobert. However, Pelton's model seems to really like the Brazilian (#6 overall) and based on what I understand of Pelton's method and the general pattern of agreement on our NCAA players, I feel comfortable tentatively co-signing on his Euro rankings. That would make Nogi the second or third best center in the draft and definitely the best after both tier 2 players are gone.

Mike Muscala: Another player I have already covered in my mock draft and numerous posts/comments. Rather than highlights, I recommend the DX scouting video. It gives a good sense of what makes him a really exciting prospect, but doesn't miss some of the real concerns either.

Jack Cooley: Good rebounder and nothing else of note. Has a shot at being a useful backup big.

Jeff Withey: Excellent shot-blocker and that will almost certainly translate to the NBA. One of the most "NBA-ready" prospects, but is near his ceiling. Expect Stiemsmian production.

#9: McCollum/Zeller and then KCP if neither is available.

#52: Andre Roberson and then Taylor Smith/Kazemi if Roberson is off the board.

#59: Whoever is left from the three above.