The inaugural entry in a series previewing what we can expect from each member of the Timberwolves roster this season.

How Acquired: Johnson was signed from the D-League to two ten day contracts in January, 2013 because of severe injury problems to the Timberwolves. He was then signed for the rest of 2013 and unguaranteed for 2013-2014. At some point before he was fired, David Kahn guaranteed his 2013-14 contract in the amount of $916,099.

In a very small sample last season (284 minutes, 75 FGAs), Johnson shot the ball quite efficiently and blocked shots at a high rate. These things made him look better then he actually was, as RAPM had him as a negative on both sides of the ball. Although Johnson is very springy and a capable shot blocker, his physique meant that he was often bullied in the paint, and he took very few shots other than dunks. 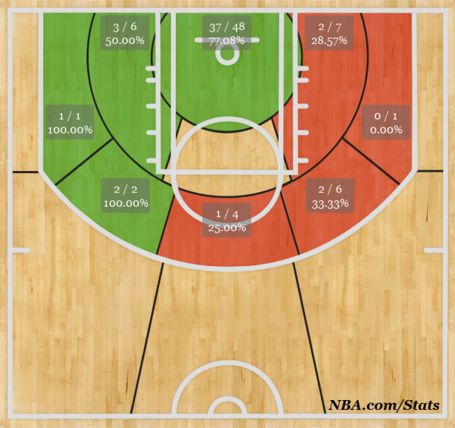 Johnson was quite effective at the rim but made no offensive impact anywhere else on the floor. Without the ability to space the floor by at least forcing his defender to respect him out to 18 feet, he's probably a net negative on the offensive side of the ball. We saw some potential improvements in Summer League, which we'll discuss below.

Not only were 70% of Johnson's field goals at the rim, 81% of his field goals were assisted. Johnson doesn't create his own offense. Most of his baskets were off alley-oops or from drive-and-dish opportunities created by others. He was able to finish at the rim admirably, which made him something more then a non-entity on offense, but an assist receptacle that does little other than dunk is a very limited player.

As frustration among the fan base grew with Greg Stiemsma as he was forced to play too many minutes in too big a role, the clamor went up for more of Chris Johnson. Rick Adelman resisted giving Johnson significant playing time, and in this case he probably got it right. Despite his highlight plays, Johnson was not a positive force on the court most nights.

Heading into Summer League, Johnson claimed to have gained 15 lbs. I am notoriously poor at noticing things like that, and he still looks awfully thin to me, but others can chime in as to whether he looks bigger. He played relatively heavy minutes in Las Vegas (18.2 m/g), and displayed some of the skills that made him intriguing last season as well as a couple of new wrinkles: he made a few nice looking mid-range jump shots, and he showed a bit of flair in passing from the high post (13 assists in six games, which tied for the team lead), something Adelman definitely appreciates. We'll see whether those skills carry over.

Best Case Scenario: Johnson emerges as a regular performer off the bench, and with the benefit of added muscle does a better job protecting the paint with his athleticism then he did last season. His passing ability carries over to the regular season so that he doesn't completely hamstring the offense when he's on the floor. He becomes a (significantly) less erratic version of Anthony Randolph. In short, he proves to be the best two-way option on the roster to back up Pekovic.

Worst Case Scenario: Johnson remains the same high flying highlight reel he was last season, without really helping the team. He settles into a garbage time role where he impresses the crowd with some dunks and blocks when the game is already decided.

Most Likely Outcome(?): Johnson's playing time hinges largely on the health of other players. When everyone is healthy, there probably won't be much of a role for him, at least not early, as I expect Adelman to be more comfortable with the veteran Turiaf. However, the more time he gets the more comfortable he'll begin to look, and I predict his performance will take a modest step forward this year as he gets a training camp and regular practice time with the Wolves.

By the end of the season, it wouldn't surprise me if he has put himself in a position to get a guaranteed (if small) contract for 2014-15, either from the Wolves or another team.

What do you think?