What does 2013-14 have in store for our remaining Russian after a difficult rookie season?

How Acquired: The Wolves signed Shved as a free agent in the summer of 2012 on a three year deal worth over $9 million. Although he was a well known prospect earlier in his career and played for quality Russian teams when he was quite young, he somehow avoided being drafted when he became automatically eligible at age 21 in 2010. By then, he had been under contract with powerhouse CSKA Moscow for several years and had been loaned out to other quality Russian teams Khimki and Dynamo Moscow. His Draft Express profile suggests that he was still a bit under the radar as the 2010 draft approached, and was expected to be a 2nd rounder. For whatever reason, he slipped through the cracks, and hence became a free agent.

Overall, Shved had a difficult rookie year. Although he showed certain talents, including at times impressive court vision and ball handling skills, he was a woeful shooter of the basketball and, though not the complete disaster I expected on defense, he wasn't a positive there either. He was not physically ready to take on the role that was asked of him due to the injuries the Wolves suffered, and it showed.

There has been a lot of talk that he was much better in the first half of the season before hitting the "rookie wall" and fading badly. While there is some truth to that, it isn't nearly that clear cut.

As we can see, December was Shved's strongest month. His two- and three-point shooting was at its best in December, and it was the only month besides a short April that featured a better than 2:1 assist to turnover ratio. His January, however, was arguably his worst month. He shot a disastrous 24% from 3 and saw his assists go down as well. We can tell a story: he played a lot more minutes early in the season then anyone expected; over the first two months he averaged 28 minutes a game and wound up under a lot of pressure to perform given the excessive injuries. He was still playing over 30 minutes a night in January, and possibly it just caught up with him.

After that, his minutes dwindled steadily through the rest of the season and his numbers never really rebounded. 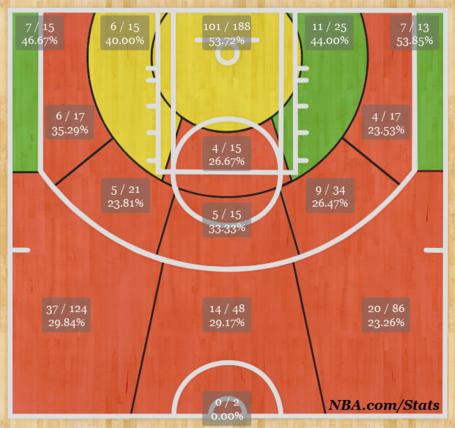 Shved was not an outstanding shooter from anywhere on the court, though he did shoot corner threes well in a very limited sample. He shot 61% at the rim, similar to Derrick Williams, but was assisted much less frequently on those shots. He showed an ability to drive the ball, something he'll have to combine with much better three point shooting to be an effective offensive player.

One of the keys to his future is he has to get stronger. Teams learned to bump him on pick and rolls, which threw him off because he was unable to absorb the hits. His lack of strength also affected him on drives and defense as well, and contributed to his fatigue. He needs to add strength and be better prepared physically for the demands of the NBA, which is not unusual for players coming into their second season. We'll soon see whether he accomplished that goal.

A healthy Wolves team offers Shved a lot more competition for playing time then last year's version did. Once Brandon Roy and Chase Budinger went down there were too many wing and guard minutes for too few players, and Shved was on the court more than Rick Adelman particularly wanted. This year, he's going to have to earn minutes backing up Kevin Martin at the shooting guard spot with Corey Brewer also available to take some of those back up wing minutes. His best role might be as a backup point guard to Ricky Rubio, because he has excellent court vision and can be effective in the pick and roll, but J.J. Barea will also be occupying that spot.

Best Case Scenario: He shows up at camp with a more mature body and game, and seizes the 6th man role as the Wolves look to limit Martin's minutes. He also slides over to point guard some, and really galvanizes the 2nd unit. His 3 point shooting improves to league average and he stays healthy all season, providing the Wolves with 25 solid minutes a game.

Worst Case Scenario: Lots of DNP-CDs because he isn't good enough to crack a three man wing rotation of Martin, Budinger, and Brewer, while JJ handles the backup point guard duties. I suspect this only happens if he really shows no improvement over last season.

Likely Outcome (?): I have some faith in Shved. It can take an adjustment from Europe. I think he starts off with around 12-14 minutes a game sharing backup wing duties with Brewer, but slowly takes over more of those minutes as he plays better. I like his combination of court vision, ball handling ability, and athleticism; I think he emerges as a real NBA player this season, much like Goran Dragic did in his second year.

What do you think?