How will the diminutive guard fit into a (hopefully) healthy Wolves back court?

How Acquired: Barea was signed as a free agent in December of 2011 for four years and $18 million.  He was coming off a terrific run to the NBA title with the Mavericks, for whom he had played a significant role in the playoffs.

Barea is a small, pesky, high usage guard who can shoot you into or out of games. He tends to take over the offense when he's on the floor, keeping the ball in his hands and making the decisions on most possessions. We can see that not only does he have a high usage rate, but he also has high assist and turnover percentages as well.  For good or ill, he impacts the game.

He's a career 35.5% three point shooter, and shot 34.6% last year, which, incredibly, led the Wolves. Hopefully that will never happen again.  He's a player who gets under the skin of opponents; feisty might be the best word to describe him. He was also fined last season (deservedly) under the new NBA anti-flopping rules.  He knows who he is: a player who goes full-speed as long as he's in the game. In one post-game media scrum last season he said he was happy Adelman removed him from the game when he did, because he was about to launch a bad shot. Thus we have the conundrum of J.J.: he is who he is and that player is a roll of the dice. Some nights he helps you, other nights he hurts you, but he's going to have an impact either way, and there's no way of knowing before hand which player you are going to get.

He's also one of the most veteran returning players on the team, and hasn't been shy about calling out teammates and their effort in the past:

"We've got problems here," Barea said after his team shot 10-for-40 in the second half and struggled on defense. "We have a lot of guys that don't care. On a basketball team, when you have a bunch of guys who don't care, it's tough to win games. We're going to keep getting [losses] here until we get players that care about winning, about the team, about the fans."

This was a quote from April, 2012; I'm not sure the Wolves need this sort of thing anymore, and my hope is that he is able to channel his leadership qualities in a positive way this year as a leader of the 2nd unit and someone who has experience winning, which many of the Wolves lack. 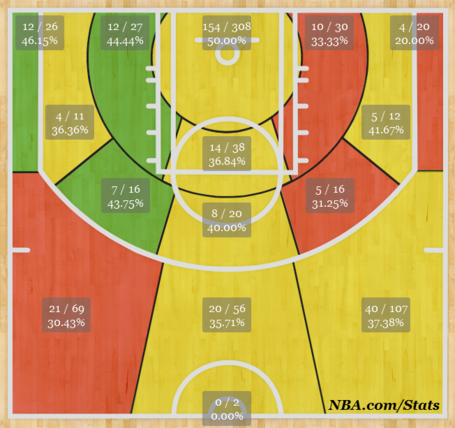 588 of Barea's 758 shot attempts last season were either in the paint or three pointers.  He is extremely effective getting to the rim, and for a player of his stature, he converted there at a reasonable 57%, though this was worse then previous seasons where he had shot as well as 62%.  At this point in his career, he isn't going to change.  He's a high usage player who needs to be deployed carefully to have a positive impact for the team.  In an ideal world, he's the type of player whose minutes fluctuate significantly based on how the game is going and how he is going; in the real world, it's difficult to maintain such an undefined role.

Expected Role: 15-25 minutes a game.  In all likelihood, Barea will begin the season as Ricky Rubio's primary backup at point guard.  He will also probably get a few minutes along side either Rubio or Alexey Shved in more of a shooting guard role.  Barea is going to handle the ball and shoot it when he's out there regardless of who else is on the floor.

Best Case Scenario: Adelman figures out how to best use Barea and he has more nights like this:

Barea is capable of energizing the team and the arena when things are not going well otherwise; he is also capable of making things worse. Ideally he's a wildcard that doesn't have to be played (a lot) every night, but rather when the situation calls for his kind of self-generated chaos.

Worst Case Scenario: Injuries and/or lack of development force Barea into too many minutes and too big a role, and he's put in a position to derail the team more often then he helps it.  We saw this often last season as he was often forced to play big minutes, and without Kevin Love available his usage climbed to a career high 25.1%.

J.J. Barea is a luxury item, he isn't a staple.  He's a fancy box of chocolates, not a loaf of bread.  When viewed that way, he can add to the pleasures of fandom and help the Wolves win.  When you have to rely on him for your daily sustenance, things get unhealthy in a hurry.