It's our third year forward's turn under the microscope.

How Acquired: 2nd overall draft pick in 2011. This was only a controversial choice here at Canis Hoopus, as Williams was widely regarded as the 2nd best prospect in the draft behind Duke point guard Kyrie Irving. The problem was, and continues to be, that Williams is really a power forward, a position that the Wolves have covered. Further, his primary attribute as a sophmore at Arizona was his scoring efficiency, driven by an incredible percentage on 3 pointers. That looked like an outlier at the time, and has proven to be so.

In his second season with the Wolves, Williams started 56 games and played nearly 2000 minutes, mostly as a result of Kevin Love's injuries.

He showed modest improvement in some areas, increasing his shooting efficiency numbers largely as a result of improving his 3 point shooting from horrific as a rookie (27%) to merely below average in his second year (33%). One of the keys for his future in the NBA will be continued improvement as a shooter. If he is able to get his 3 point shooting into the area of 37%, he could still emerge as a useful stretch four with the athletic chops to hang in there on the defensive glass and help in transition. 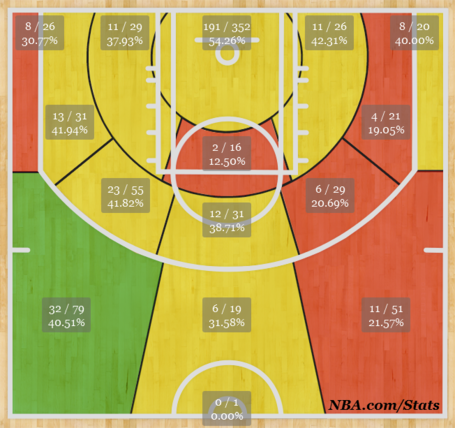 That 54% on shots in the paint is the flashing danger signal, and what we've complained about with Williams for the last two seasons. (He was equally bad as a rookie in this area--53%). Although he does get to the free throw line a reasonable amount on his forays into the paint, that does not mitigate his absolutely atrocious finishing around the basket. The Mud Run is a thing of legend.

Ugh. There is nothing pretty about his shooting percentages within 10 feet. In addition to the three point shooting discussed above, this is the obvious path to improvement for Williams as an offensive player. He has to figure out how to convert around the rim. He's never going to be a great passer or offensive rebounder; his value is entirely tied to his ability as a scorer.

In a way I'm softening a bit toward Williams. He makes too much money, and frankly should be on another team. He is not a guy you want making decisions with the ball very much. But...the way to get better for him is so obvious that I'm beginning to think he might get at least partway there over the next couple of seasons. He has to get better around the rim; it's hard to be that bad and stay that bad.

It would be best for his career if he were traded to a team without Kevin Love, but apparently there simply was not a deal out there this summer. An interesting question that will get answered before the season starts is whether the Wolves will pick up his 4th year option for 2014-15. That option is for over $6 million, and should probably be declined. My guess is they will pick up the option.

Williams will be fighting with Dante Cunningham for the backup power forward job behind Kevin Love. He is also apparently once again trying to lose weight this summer in a likely doomed attempt to get some minutes as a small forward. The problem is that he lacks the ball handling and decision making chops for that position, and his athletic gifts are minimized by going against quicker threes.

Williams emerges as a scorer. He improves his shooting from distance as well as his finishing around the rim, and earns more minutes as a 6th man backing up Love and making small-ball lineups with Love shifting to center a viable and successful option.

He stagnates. We saw last season that Rick Adelman had little patience for Williams' weaknesses, and would bench him for long stretches. Those stretches get longer and longer as he loses out to the more coach friendly and seemingly more court aware Dante Cunningham, culminating in a lot of DNP-CDs.

Somewhere in between. I expect his three point shooting to improve moderately, which might help keep him on the floor. Ultimately I think he'll be in and out of the rotation, but if he stays healthy he'll get his chances. I'm not convinced that he will do enough to make him any more tradeable next summer then he has been this summer.