Wing Chase Budinger returns to the Wolves on a new contract after a disappointing, injury ravaged first season with the club. What's in store?

How Acquired: The Wolves traded for Budinger prior to the 2012 NBA draft, dealing the 18th pick to the Rockets for him. Budinger was entering the final year of a very team friendly contract which paid him only $885,000 last season. Despite only appearing in 23 games in 2012-13, he was in line for a significant raise, which he got when the Wolves re-signed him for $15M over three years.

Budinger is a player who does nothing extremely well or extremely poorly.  He's a great player to have to save you from playing worse guys, but he isn't a guy who is going to move the needle a whole lot.  Had he been healthy, replacing Wes Johnson's minutes with him would have represented a significant upgrade, but mostly because Wes Johnson was so actively terrible.  Budinger is an average NBA player.  Having such players is essential for a successful team, because bad players can be so costly in the win column, but it's at least arguable that the Wolves overpaid for the privilege with this new contract. 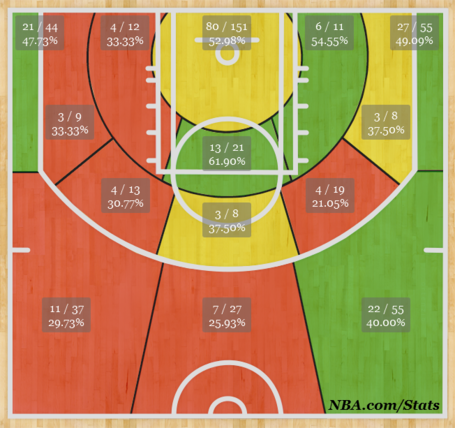 This chart is from the 2011-12 season, because last year was too small a sample size to draw conclusions from.  We can see from his last year in Houston why Rick Adelman likes him; he's shown the ability to be a good corner 3 point shooter, essential in today's game and Adelman's system.  Having him in the corner ready to take and make that shot when the defense rotates away is something the team needs.  He also takes very few mid range jump shots; if it's not in the paint, it's usually a 3 pointer.

Budinger does not create offense.

We can see that for each shot distance, more than half of his makes were assisted in 2011-12.  Overall, 78% of his baskets were assisted that year.  This is consistent with his career numbers, and significantly higher than, for example, Kevin Martin, another wing player under RIck Adelman.  Budinger is an assist receptacle, be it at the rim or behind the arc.  His offensive value is in converting those shots at a good percentage.

Defensively, he has the size and athleticism to be a plus on that side of the ball, but so far in his career he has not used those tools to his advantage.  His defensive RAPM has hovered around average most of the time, and given that he'll mostly be paired with a weaker defender in Kevin Martin, he'll likely be asked to guard the opponent's toughest wing player most nights.

Expected Role: 20-32 minutes as the starter at small forward. I expect he'll beat out Corey Brewer for the starting spot, given Adelman's comfort with him, and his less variable game.  He needs to stay healthy and exhibit consistency with his shooting, as he's likely to get a significant number of open shots as teams concentrate on the Wolves other weapons.

Best case scenario: He finds a new level of comfort with Adelman and this team, as the attention paid to more heralded teammates puts him in position to thrive in transition and in the corners.  He becomes that guy that always seems to kill the Wolves: the seemingly average wing player who all of sudden has hung 20 on us.  Budinger becomes a cog in one of the best offenses in the league, as there is nobody opponents can safely leave alone.

Worst case scenario: He struggles with his shot and the team defense with he and Martin on the floor together proves untenable.  As a result, he loses time to the more active wild-card Corey Brewer.  He starts coming off the bench at some point in the first half of the season, and he never finds his rhythm, proving to be a disappointing investment for the capped out Wolves.

Likely Outcome: Optimistically, I expect something closer to the best case.  There is no reason why Budinger shouldn't shoot threes around his career mark of 36%, and there is a possibility, with the way he'll be used and his past success in the corners that it will be even higher.  Budinger is a fairly low mistake player, so I doubt Adelman will get so frustrated with him that he loses playing time.  It's clear that Adelman really wanted him back, and I expect him to be used pretty heavily and successfully.

What do you expect from Chase this year?