Suddenly, a ghostly apparition appears in front of him; a man in an old-fashioned suit carrying a peach basket.

"I am the ghost of James Naismith, and I'm here to give you some advice.  The Spanish point guard Ricky Rubio is the answer to your draft questions. He will be the magical unicorn for your franchise who will change everything."

"Hmm..." Kahn looks through reports..."I do like that smile. But I'm not sure he's athletic enough for our league."

"SILENCE! I am James Naismith. I invented this game! Athletic.  Pah! Was Bob Cousy athletic?  This boy will be the face of your franchise. Draft him or beware!"

Kahn, somewhat cowed: "But I don't think he'll be available with the 6th pick. Someone will take him before us."

Naismith, chuckling: "Here's what you do.  Call Ernie Grunfeld in the morning.  I'll take care of the rest. Believe me, no matter what else you do, Ricky Rubio will be your legacy.  Don't mess it up."

And with that, he was gone.

The next morning, no longer sure if what he had seen was real or a dream, David Kahn reached slowly for his phone.  Still unsure of what he would say, he punched in the number for the Washington Wizards...

"...Ernie, it's David Kahn from the Timberwolves. I was wondering if you are willing to talk about your draft pick..."

At this point, we know what Ricky Rubio brings. He's a great passer, superior ball-handler on the pick and roll, and an excellent defensive player who seems able to disrupt the opponent's offense by reading plays several steps ahead.

Mostly, he is among the most entertaining players in the NBA, with an infectious style of play that is a joy to watch. He exudes a tremendous positive energy and attitude that attracts fans and makes the Wolves a League Pass favorite.

All of that is great; the question we have to ask is whether he will become a better player.  There are clear weaknesses.  He turns the ball over a bit too much: the best of the ball dominant point guards (Chris Paul, Tony Parker) are in the low teens for turnover percentage, while Rubio has been over 20% both seasons.

More troubling is his inability to make shots from just about anywhere on the floor: 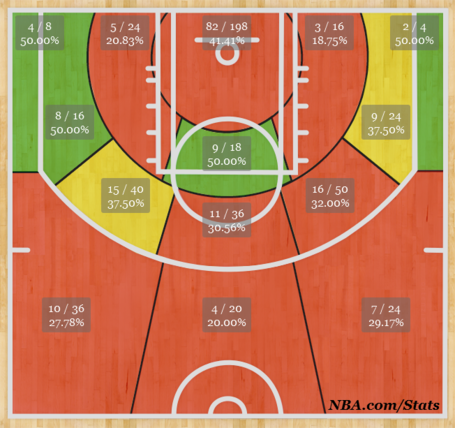 Wow that's bad shooting.  There is nowhere on the floor that he shoots effectively, and his failures in the paint are particularly glaring.  In fact, I believe that his understandable reluctance to shoot the ball has a negative effect on his turnover rate, as he often passes up shots to try to force a pass.

Another thing we see is that he took more shots from the dreaded 16'-23' feet range than any other distance. Opposing teams were happy to give him these shots in order to clog his driving and passing lanes. But even when he got to the rim, he was terrible at finishing.  This has been true in both of his seasons, and must improve for Rubio to become a great player. Zach Harper recently wrote an interesting piece at AWAW looking at whether it was possible for the Wolves to have a top five offense this season.  Mostly it focused on Rubio needing to improve his field goal percentage.  Though I'm not entirely sure I buy the premise, there is good research in there suggesting that the best offenses in recent NBA history have much better shooting point guards, and it would be difficult for the Wolves to be a truly elite offense without an improvement in Rubio's field goal percentage up to at least 40%.

Even shooting as poorly as he has, Rubio is a good player. His defensive abilities are good enough that he was a 2 RAPM player in 2013 despite the horrific shooting. However, in order for him to be a great player, the finishing clearly has to improve. In a small sample at Eurobasket, he made 46.6% of his two point shots, and anecdotally looked somewhat better from mid-range. The key for him, though, is going to be in the paint. He needs to be willing and able to make shots around the basket in order for his passing game to be as effective as it can be.  He has so far lacked the awareness and creativity needed to convert in the paint as a below the rim player. Whether that can be developed remains to be seen.

Expected Role: Rubio will be the starting point guard.  With luck, he'll stay healthy this year and play 34+ minutes a game. We need to see a full season from Rubio and the whole team really to see where we are.  He will be eligible for an extension next fall (see Paul George and John Wall this year), and the Wolves need to know what they are investing in by then.

Best Case Scenario: A healthy Rubio takes the next step and nears all-star level of play by getting his 3 point shooting up close to league average and more importantly making his shots in the paint at a better rate.  This, along with his already terrific defense and passing, transforms him from an entertaining player to an excellent one, and gets the Wolves into the 50 win territory.

Worst Case Scenario: The poor shooting continues to the point where teams are leaving Rubio unguarded more and more, which also has a negative impact on the rest of his offensive game.  Despite clearly being the best perimeter defender on the team, an exasperated Rick Adelman finds himself turning to J.J. Barea more and more often in place of Ricky to try to generate offense for a stagnant club.  Things just don't come together as the Wolves struggle to 38 wins. Rubio's future is no longer clear.

Expected outcome; Well...I'm optimistic about Rubio. Although he's been a pro for a long time and the shooting has always been a problem, it's also clear to me that he's a very smart player who understands his weaknesses and areas he needs to improve. He's never going to be a great shooter or scorer, but I do expect to see some improvement in his field goal percentage this year; enough anyway to make his game work. I can't wait to see him back on the floor in a Wolves uniform.