Behind the Scenes with the Timberwolves Alexey Shved

In an interview with a Russian newspaper, Alexey Shved talks openly about his personal life, his relationship, how he spend his time in Minnesota, the importance of the Kirilenko family in his transition to the US way of life and the option of obtaining US citizenship.

Share All sharing options for: Behind the Scenes with the Timberwolves Alexey Shved

st before the start of the Eurobasket 2013, Alexey Shved allowed a reporter of Russian sport newspaper "Express Gazeta" a rare glimpse into his personal life, answering some questions. Is he really a notorious club hopper? Who's responsible for his odd wardrobe? And what was the deal with the painted finger nails?! Here is a translation of most of the content which I enriched with some pictures of the people closest to the Shveddy One:

Just a few years ago, Alexey Shved was considered only a call-up reserve layer for the Russian basketball national team. Since that, he’s not only made a name for himself but even joined the NBA - the strongest basketball league in the world. Among his many fans, there is a special person rooting for him and his team – his girlfriend Nastya. Shved met Nastasya Ziaditdinova in Moscow, when she worked as a cheerleader for Lyosha’s former club CSKA.

EG: Did you notice each other right away?
Alexey: Yes. She caught my eye immediately as she’s a terrific dancer. As we socialized, we noticed quickly that we were in tune with each other and very much alike. After some time we started meeting each other, and have been together for a long time now. Last year, Nastya joined me in Minnesota shortly after I signed the contract with the Timberwolves. 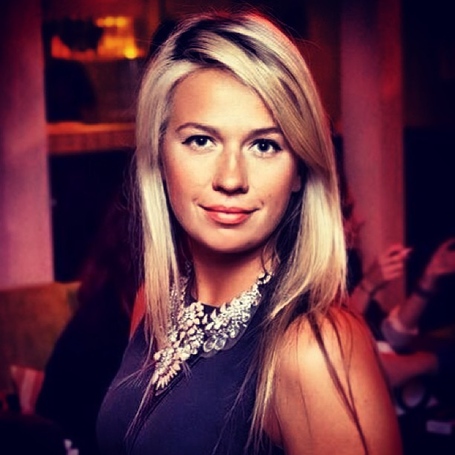 EG: Does Nastya actually love basketball and sport in general?
Alexey: She loves watching me play. She loses interest when I’m not on the court and definitely wouldn’t visit a basketball game on her own.

Eg: What does Nastya do all year long in Minnesota?
Alexey: Mostly housework. Cooking, organizing, keeping things in order. She does all of that so that I can concentrate on basketball and not lose thoughts to other problems. Sometimes we fight over things too, but mostly we have fun. Once, I lost a bet to her and she made me paint my fingernails black for a whole day. At the gym, I had to explain myself to my teammates who were looking oddly at me. Another time in Belgorod, she wanted me to walk down a street in high heels and a skirt. I said: "How should I fit in there with your tiny shoes and my size 13 feet?!" She said, "So what, we’ll get you tailor made ones!" To cut it short, it doesn’t ever get boring with her. We are very comfortable with each other and love each other.

EG: I guess you have met her parents a long time ago. Thinking of marriage?
Alexey: We don’t have any plans. We’re happy with the way things are right now. 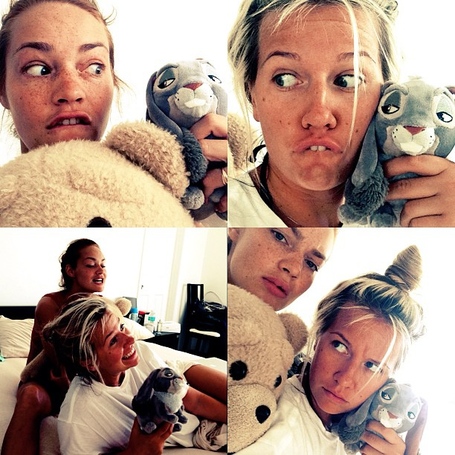 EG: When did the thought to go to the NBA cross your mind?
Alexey: It has always been a life dream. The NBA is a brand of basketball that is completely different to Europe. Here, everybody is playing on the highest level. It features the best players in the world and I am very happy that I landed here.

EG: How do you spend your time in Minnesota? Do you go to night clubs?
Alexey: Not very often. There is not a lot of time to kill. We have up to four games a week, maybe even five. Road trips can take two weeks. When you return, you have to take a few days to rest – and then the same procedure starts again.

EG: Have you been to Las Vegas yet?
Alexey: I visited Vegas with a few friends for two days after the Rookie Challenge. The city impressed me a lot and I recommend visiting it to everyone. 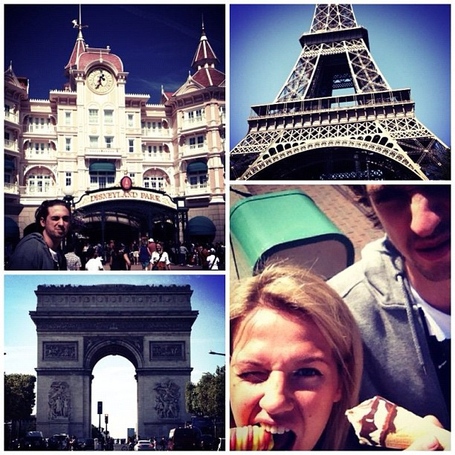 After becoming an Olympic hero, Alexey took Nastya to Paris (via distilleryimage9.ak.instagram.com)

EG: Did you have luck? Won anything?
Alexey: I’m not interested in gambling so I didn’t really play in casinos. I went to Las Vegas because of the fun, big company I had with me. We were just socializing, fooling around and making sure that I got distracted from basketball for a while. That was all.

EG: How hard was it adopting to the United States? A different country with different people and customs.
Alexey: It was okay and I was lucky that Andrei Kirilenko, our greatest native basketball player, was my teammate. Andrei has been in the NBA for a long time and helped me massively. As I arrived in Minnesota, I was practically alone. Nastya stayed in Moscow until she got her Visa. My brother, who is living with me in the USA now too, was about to enter college. During that time, I was following Andrei everywhere, almost like a dog (laughs). When needing advice on which apartment to rent, which car to buy, which furniture, forks and knives, just everything - Andrei was a great mentor and help. 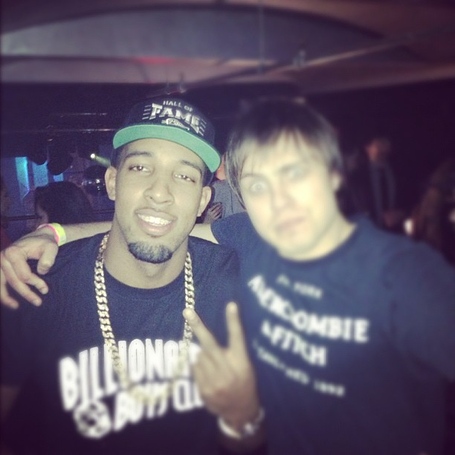 An unfortunate picture of Caged Lion and Shved's brother Dmitri. Dmitri raps in Russian and seems to be a good friend of Alex Conove. (via distilleryimage3.ak.instagram.com)

EG: Did his wife, Masha Lopatova, have a say in this process too?
Alexey: She was a great help too. They have a wonderful family with great kids. Andrei and Masha have a house in St. Tropez in France and they invited me to visit them during the off-season. Walking around, taking trips on boats, drinking first-class wine. Just spending time beautifully!

EG: Now that Andrei will join the Brooklyn Nets, where you and the Kirilenkos sad about being separated?
Alexey: Well, of course we would have preferred playing forever. But this is a great opportunity for Andrei. Brooklyn is a championship caliber team and no Russian has had the privilege to play in such a group. I understand his decision. He is playing at the very highest level.

EG: Did you also approve his decision to leave the national team? He’d have been a useful player.
Alexey: Nobody would argue that but he has done so much for the national team that he can take a break. One shouldn’t even think about criticizing him for that.

A few days before Shved and the national team left the country for the European Championship, they visited an Adidas store to meet some fans. Alexey presented himself in a stylish outfit that featured a cap and sunglasses.

EG: Who gets you clothes?
Alexey: Nastya. I also have a friend called Pavel who works at the Barvinkha Luxury Village, a shopping center in the prestigious Rublevka area in Moscow. He started from the bottom but has made a name for himself as one of the most important names in the fashion business. When I’m in Moscow, Pasha selects a few items for me to buy. Personally, I’m not a shopper. 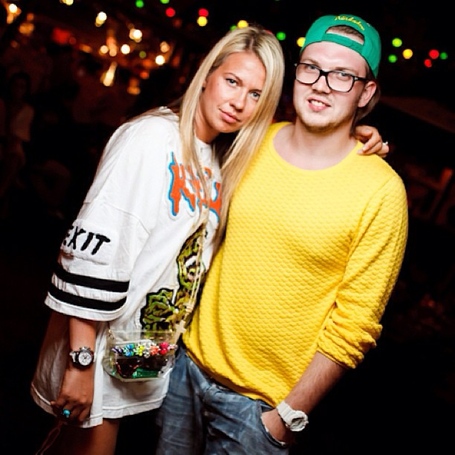 EG: What car are you driving?
Alexey: I drive a BMW in the USA. I had the same in Moscow, but I sold that one when I got an Audi for winning the bronze medal at the Olympics. When I was 18, I bought a Honda that my dad is driving now.

EG: Your last name is unusual and source for some talk. Has Shved been to Sweden yet?
Alexey: Not yet. But I have made plans to visit that country soon. I also want to visit Singapore badly and check into that new luxury hotel. They say there’s a park on the roof and even a swimming pool.

EG: Where did you spend your last holidays?
Alexey: In Miami. But I did more preparation and training for the EuroBasket than resting. After the season, I spend some nights in Moscow, and then went to my parents in Belgorod. There wasn’t much tanning on the beach for me.

EG: Did you parents visit you in Minnesota yet?
Alexey: Yes. They visited me in December to celebrate my birthday and stayed until the New Year. My female cousins, their husbands, children, and my brother where here too. 13 people in total - even my cat Chika! When I was little, I was dreaming of owning a big house that I could gather all of my family in. I can now say that this dream came true. 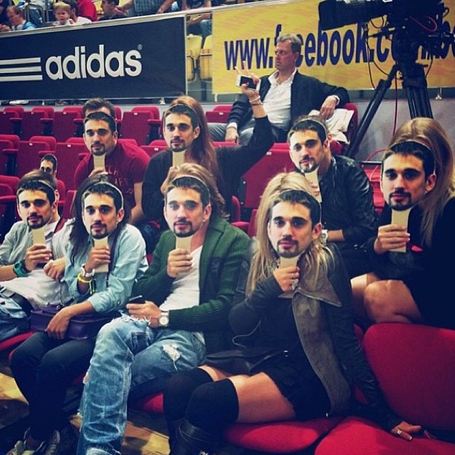