This edition of Timberwolves Player Preview focuses on the backup forward who appeared in 80 games for the Wolves last season and was third in minutes played. He held firm while all around him were losing body parts.

How acquired: Cunningham was acquired in the summer of 2012 in a trade with the Memphis Grizzlies.  The Wolves traded guard Wayne Ellington for Cunningham, who had two years left on his contract.  He enters the final year of his deal, which will pay him just over $2M this season.

Because he was one of the very few Wolves to be available all season, Cunningham finished the year third on the team in minutes played, appearing in 80 games at about 25 minutes per.  Rick Adelman obviously likes Cunningham, probably due to his perceived consistency, his effort, and his intelligence on the court.  He was just behind Rubio and Kirilenko in steal percentage, had the lowest turnover percentage of any Wolf with significant minutes, and rarely tried to do anything he wasn't capable of. As a result, he saw more minutes then his more heralded competitor for playing time, Derrick Williams. 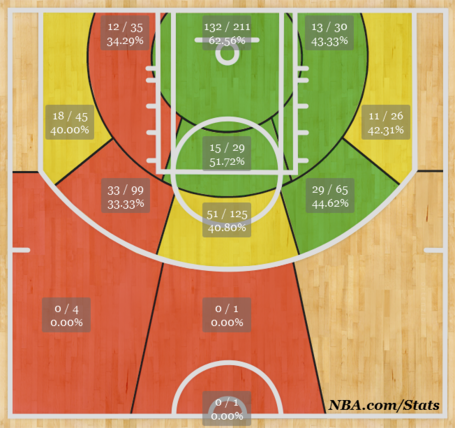 To wit: he was quite successful with the shots he took within 8 feet (62%, compared to 54% for Derrick Williams), and was able to make a good percentage of his mid-range jumpers, especially from the top of the key and around the elbows, where he often stationed himself and found open shots as the defense moved to cover other players.

The downside is that his comfort zone is not all that efficient.  Despite making a reasonable number of mid-range jumpers, it still isn't a shot you want a lot of as a team, and it leads to a limited amount of free throw attempts for Cunningham.  That combined with his inability to extend his range beyond the three point line makes him a relatively inefficient offensive player.

One gets the sense that he is liked by coaches because of his effort and lack of mistakes more than for his positive contributions, which are limited.  He's an average defensive player and below average offensive one, so he isn't significantly helping you in one area.  He's the kind of player who doesn't hurt you too much when you are resting your starters.

Expected Role: 10-24 minutes a game, likely on the lower end of that range.  With everyone healthy, he's fighting Derrick Williams for backup minutes to Kevin Love.  We saw last year that Adelman was more than willing to allow Cunningham to win that fight, and there is no reason the dynamics should change this year.  Coach will play who he feels more comfortable with, and with the roster as it is, there is probably only playing time for one of these two players.

Best Case Scenario: He beats out Williams for minutes, and with Love also sliding to center, finds about 20 minutes a game.  He provides consistent defensive effort, and even manages to get out beyond the arc and hit a few shots.  Settling in to a strong role as the team's 7th man, Cunningham earns himself a healthy raise next summer.

Worst Case Scenario: The opposite.  Williams shows up improved, taking the minutes away from Cunningham.  My sense is that Adelman will still try to find a way to get him in the game occasionally, but it's going to be tough.  He racks up numerous DNP-CDs, and has to accept a near minimum deal.

Likely Outcome: I really don't know.  The Cunningham-Williams battle is one of the fascinating subplots of the season.  One of them will play, the other won't, unless injuries strike again.  I think Adelman prefers Cunningham generally, and he'll have his opportunities; we'll see what he makes of them.

He was something of a fan favorite last year for his hustle and his headband.  And the endless nickname opportunities he provides.

This year will be big for him, as it will determine his immediate future in the NBA.  He'll no doubt be looking to put himself into a position to get a reasonably lucrative long-term deal.  For that he'll need playing time.

How do you see it playing out for Dante?