The Wolves' center will miss a week+ with bursitis

Share All sharing options for: Nikola Pekovic out 7-10 days

<blockquote class="twitter-tweet" lang="en"><p>After another three full minutes without an NBA injury, Wolves announce that Nikola Pekovic is out 7-10 days with bursitis in right ankle</p>&mdash; Marc Stein (@ESPNSteinLine) <a href="https://twitter.com/ESPNSteinLine/statuses/428273126980349952">January 28, 2014</a></blockquote>

First of all, be thankful it's 10 days, not 10 months. After losing Rubio, Love and Budinger for a year apiece, our injuries have been getting progressively shorter and shorter, so.....#progress?

Second, this comes at not a great time for the Wolves 'Bruise Brothers' campaign (which I think is a long shot regardless, but still...) 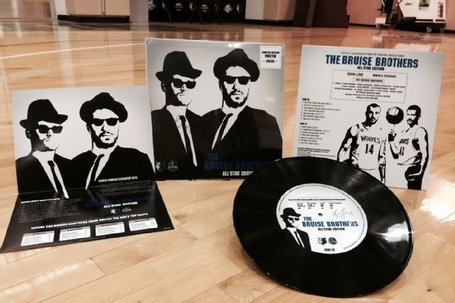 Pek already has an uphill climb to the all star game, considering LaMarcus Aldridge, Dwight Howard and Dirk are all but certainties for three of those reserve spots already. With the possibility of missing basically all the games between now and all star weekend, prospects don't look great here.

On the plus side, this should open up real minutes for Dieng. It might also serve as a good, quick glance at Love paired with a low-usage, defensive-minded center, as Turiaf figures to take most of the available playing time. The theory worked out well against the Bulls last night. But then again, they were missing their two best players. A slightly more extended look could end up telling us a lot about the best way to build around the 4 spot. I agree with Nate...it's the most difficult position to anchor a team to, and the Wolves have one more chance....at most....to get it right.